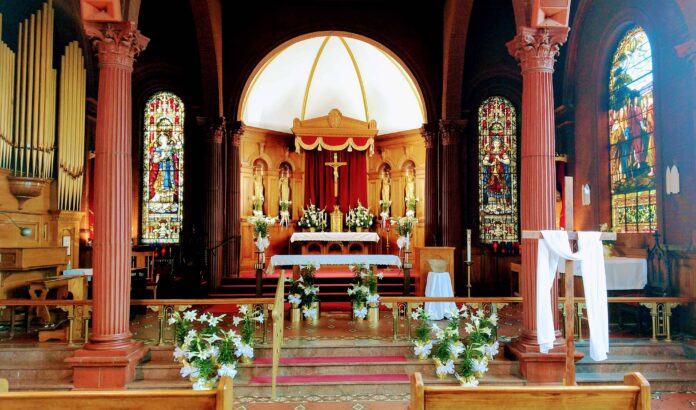 In his 56 years of priestly ministry, Msgr. Don Dunn has visited a lot of senior living homes.

“They don’t always radiate happiness,” he told the Denver Catholic. Then, referring to The Gardens at St. Elizabeth in the Highlands neighborhood where he lives, he asserted, “We do.”

“It’s a happy place. We have fun together. There’s a strong sense of community.”

Msgr. Dunn, 81, is one of 88 residents — including four other priests and two religious sisters — living at The Gardens, which just started a total renovation of the 14-story independent living tower.

“When The Gardens [tower] was built in the 1980s it was state of the art, but now it needs renovated to meet the needs of today’s seniors and their active lifestyles,” said Mary Beth Bouhall, regional administrator at the facility. Located at 2835 W. 32nd Ave. in Denver, The Gardens is owned and operated by Catholic Health Initiatives Living Communities.

The $10.1 million project includes adding multiple dining areas to offer options ranging from a casual café to a formal dining room, the addition of a 30-seat movie theater, a hair salon, a massage-spa area, a pet wash, a craft area, a laundry, and a clinic for routine medical services such as blood pressure screenings. The top floor will include a fitness area and penthouses offering 360-degree views.

“The renovations are designed to make seniors’ lives easier and to encourage them to be as independent and active as they can be,” Bouhall said.

The amenities the renovation is adding coupled with a Catholic-centered community, the social gatherings of the facility and those of the vibrant Highlands neighborhood, Bouhall said, aims to make The Gardens a home with everything residents need. Construction should be completed by January 2019.

“We’ve already had a really nice response from seniors in the area about our renovation plans,” Bouhall said. “We’re really excited about our plans and they are, too, in this popular Highlands area. We are accepting applications for the apartments.”

Inspiration for the remodeling comes from the woodwork and architecture of The Garden’s 121-year-old Christ the King Chapel, a historic landmark.

“The chapel is the heart of The Gardens, so we want the renovations to complement its wood and details,” Bouhall said about the Colonial Revival-style brick church, which is flanked on one side by the independent living tower and on the other by assisted living units that serve another 75 seniors.

“The Catholic faith is a very important part of our ministry,” Bouhall said, adding that more than half of the residents at The Gardens are Catholic. “We offer Mass and the rosary daily. Throughout the day you’ll see residents of all faiths stopping into the chapel for prayer and quiet meditation. We also have a director of mission integration/chaplain who puts forward our mission [to nurture the healing ministry of the Church], core values [reverence, integrity, compassion and excellence] and Catholic identity.”

Franciscan Sister Nancy Surma, vice president of Mission Integration for CHI Living Communities, said the organization follows the Ethical and Religious Directives of the US Conference of Catholic Bishops for health care services.

“They are inspirational and guide our actions,” she said by phone from her Erlanger, Ky., office.

Aram Haroutunian, lay chaplain and director of Mission Integration at The Gardens, is charged with making sure the spiritual needs of the residents, Catholic and otherwise, are met. For the Masses, he does the organizing for the priest residents who take turns celebrating the liturgies.

At a recent weekday morning Mass, the 108-seat Christ the King Chapel was nearly filled to capacity with residents and visitors as Msgr. Dunn celebrated the liturgy.

“Celebrating Mass in Christ the King Chapel is really a privilege,” said Msgr. Dunn, a Denver native who served in both the Denver and Colorado Springs dioceses and is perhaps best known for his many years leading Denver’s Catholic Charities.

Since its start, when what is now The Gardens was originally known as the Oakes Home, a tuberculosis sanatorium built by Episcopalian minister the Rev. Frederick Oakes, the chapel was intended to draw people to prayer, Msgr. Dunn noted.

“It was meant to bring the healing presence of Christ to people,” he said. “The chapel is so warm, traditional and very much a home for all of us. I’m grateful we can celebrate Mass together here with the Lord God in the center.”

History of The Gardens

1894 – What is now The Gardens at St. Elizabeth was built as the Oakes Home, a tuberculosis sanatorium by the Rev. Frederick Oakes, an Episcopalian minister.

1897 – Christ the King Chapel (originally Chapel of Our Merciful Savior) was built.

1934 – The TB sanatorium was closed. Treatment for other conditions continued until 1941, when the building was again closed.

1943 – The Sisters of St. Francis of Perpetual Adoration bought the property from the Episcopalian Diocese and used it as their motherhouse, renaming it St. Joseph Convent.

1954 – The motherhouse was relocated to Colorado Springs. The sisters renamed their former convent St. Elizabeth’s Retreat and used it as a home for the aged.

1974 – Ground was broken for a new three-story building to be built on the east side of the chapel.

1975 – Residents were moved from St. Elizabeth’s Retreat (the old Oakes Home) to the new structure, which was named St. Elizabeth Center. The original Oakes Home was demolished. Christ the King Chapel was named a historic landmark of the city of Denver.

1987 – On March 26 ground was broken for the erection of a 14-story apartment building west of the chapel.

1988 – In August, the new structure was opened and renamed The Gardens at St. Elizabeth.

1995 – The Sisters of Charity Healthcare Systems assumed control of The Gardens at St. Elizabeth.