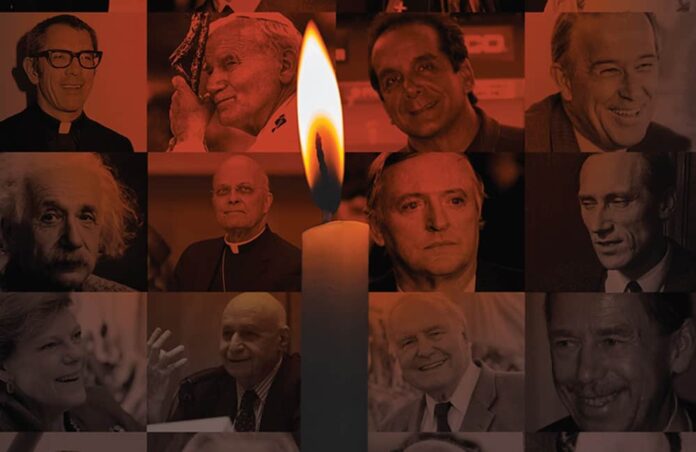 All lives are consequential, for every human being is an idea of God’s, and everyone is a someone for whom the Son of God, the second Person of the Blessed Trinity, entered history, suffered, died – and was raised from the dead to display within history a new, glorified humanity. Thus to every life, as Mrs. Loman noted in Death of a Salesman, “attention must be paid.” Or as C.S. Lewis reminded us in The Weight of Glory, “there are no ordinary people,” for everyone you meet has an eternal destiny.

Still, while every life is fascinating, some lives leave a deeper impress on history than others, and they’re all the more fascinating for it. Over seven decades, it’s been my privilege to know many such men and women. Some, I’ve worked with closely; others, including more casual acquaintances, I’ve admired from a greater distance. During my early years as a practitioner of the weekly newspaper column, I’d occasionally recollect a consequential life by way of obituary tributes (or laments). Time moves far more rapidly as life goes on, however. And as time seems to accelerate, so do the number of deaths in one’s circle of acquaintances, colleagues, and friends.

In any event, earlier this year it occurred to me that I’d been writing rather a lot of obituary columns in recent years and that a collection of them, suitably edited, might make an interesting book when combined with similar pieces written in the more distant past. My friends at Ignatius Press agreed, and the result has just been published: Not Forgotten: Elegies for, and Reminiscences, of, a Diverse Cast of Characters, Most of Them Admirable.

The 68 small essays in the book cover a lot of territory, geographically and in terms of human personalities. There are saints I’ve known (John Paul II) and martyrs whose beatification causes I’ve tried to help advance (Franz Jägerstätter and Francis X. Ford, M.M.). There are politicians and statesmen who bent the course of history in one direction or another (Lindy Boggs, Václav Havel, Henry Hyde, Scoop Jackson, Max Kampelman, Pat Moynihan, Anwar Sadat, and Sargent Shriver). There are men whose books I once read in college and graduate school who later became friends and colleagues (Peter Berger, James Billington, Avery Dulles, SJ, Leszek Kołakowski, Richard John Neuhaus, Michael Novak, and James Schall, SJ). There are rock’n’roll legends (Denny Doherty and Cass Elliott of The Mamas and The Papas), one longtime communist and master of the five-string banjo (Pete Seeger), and three heroes in the National Baseball Hall of Fame (Frank Robinson, Jackie Robinson, and Earl Weaver). There are princes of the Church (Bernardin Gantin, Francis George, OMI, Lubomyr Husar, MSU, and Aaron Jean-Marie Lustiger). There is a man I once loathed and then came to love (Chuck Colson). There are fellow scribblers, far more talented than I (Fouad Ajami, Bill Buckley, Charles Krauthammer, Tom Wolfe, and Herman Wouk). And then there are my parents and my late son-in-law.

I deliberately chose the word “diverse” in my subtitle because “diversity” is getting a lot of attention these days. And I must confess that much of the “diversity” talk I hear strikes me as ideologically intoxicated: “diversity” means the preemptive and presumptuous categorization – better, pigeon-holing – of people by race, sex, nature of desire, or that fanciful and dangerous chimera, “gender.”  By contrast, virtually all the consequential lives remembered (and in most instances celebrated) in Not Forgotten manifest “diversity” in a far nobler way. For most of those in my cast of characters embody, quite diversely, the creative, purposeful, vocational living that is possible for everyone, irrespective of what boxes we happen to tick on a census form.

We are not pre-programmed creatures, like the artificially fabricated humans of Brave New World whose earthly destiny is pre-determined in a test tube. No: in the biblical view of things, anyone can live the virtues with the help of grace, and wickedness is an ever-present temptation to us all. That is the human condition and to suggest otherwise is to demean human dignity.

For all their differences, the men and women in my album of elegies and reminiscences all teach important lessons about what it means to live a worthy life. Some, admittedly, teach it along the old via negativa, the road we ought not travel. But that is another reason why they, like those who are Lewis’s “immortal splendors,” should not be forgotten.