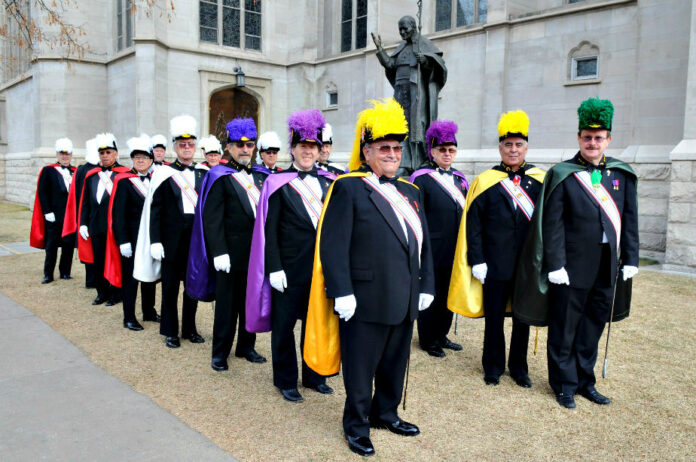 The chivalric knights of medieval times are not all dead. The patriotism and guardianship of old is what the Knights of Columbus strive to live in their service to the Church today.

The Catholic fraternal benefit organization prides itself on exemplifying charity, unity, fraternity and patriotism, all in the name of honoring Christ.

“We are what we call ‘the right hand of the Catholic Church,’” Trujillo said. “If we go in our fourth-degree regalia you are going to recognize us. We’re trying to be a visible hand of the Church.”

Trujillo said their regalia raises dignity and shows pride in their service.

Each officer in the Knights’ fourth-degree wears a certain color to signify his office. Over each Knight’s black tuxedo, members will don a cape with an emblem patch on the left shoulder, a baldric or sash, white gloves and a sword.

The members also wear a chapeau that is topped with a plume.

After that, the faithful navigator wears white and the assembly commander wears purple. Members of the color corps office wear red capes with white plumes.

“It’s throughout the order like that. The colors don’t change,” said Trujillo, who attends Holy Name of Mary Parish in Del Norte.

The following is a guide to knowing the rank of a Knights of Columbus dressed in regalia based on the colors of their cape and plume.

KNIGHTS RANK
The following is a guide to knowing the rank of a Knights of Columbus dressed in regalia based on the colors of their cape and plume.