Rediscovering the reality of the Eucharist 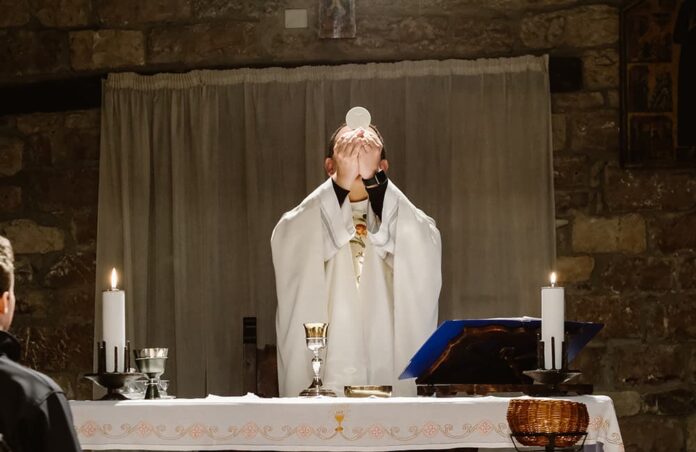 Thinking out loud about a return to “Sunday normal,” a veteran pastor recently told me that he thought it would take one year for each month of lockdown/quarantine/ shelter-at-home for Mass attendance to return to where it was in February 2020. I said I hoped that people’s hunger for the Eucharist would bring them back more quickly, once they concluded that it was reasonably safe, for themselves and others, to do so. But whether “Sunday normal” returns this year or next year, the “Sunday normal” of February 2020 isn’t something for which we should easily settle. Because “Sunday normal” isn’t what it should be. This extended moment of Eucharistic fasting may be a providential moment to do something about that.

“Never let a good crisis go to waste” is a maxim that applies beyond politics. Applied to the Church, it suggests that this in-between time is a privileged time to re-catechize (or in some cases, catechize) the Church in the U.S. on the full, amazing, supernatural meaning of the Eucharist. If bishops and pastors turn their homiletic attention to that over the next weeks and months, re-enforcing with e-mailed catechetical materials what they say from the pulpit to those in church and those participating through live-streaming, crisis may be transformed into opportunity, such that the new “Sunday normal” is something better than the old.

A good way to jolt a diocese or a parish into paying attention on this subject is to cite a marvelous passage from a 1955 letter of Flannery O’Connor’s, describing a New York dinner party at which the aspiring young writer was introduced to the already-successful author Mary McCarthy:

“I was once…taken by some friends to have dinner with Mary McCarthy and her husband, Mr. Broadwater…She departed the Church at the age of 15 and is a Big Intellectual. We went at eight and at one, I hadn’t opened my mouth once, there being nothing for me in such company to say….Well, toward morning the conversation turned to the Eucharist, which I, being the Catholic, was obviously supposed to defend. Mrs. Broadwater said when she was a child and received the Host, she thought of it as the Holy Ghost, He being the ‘most portable’ person of the Trinity; now she thought of it as a symbol and implied that it was a pretty good one. I then said, in a very shaky voice, ‘Well, if it’s a symbol, to hell with it.’ That was all the defense I was capable of, but I realize now that this is all I will ever be able to say about it, except that it is the center of existence for me; all the rest of life is expendable.”

How many Catholics today could make such a dramatic declaration that the Eucharist is what the Lord Jesus said it is: his very body and blood, through which we enter into communion with the Second Person of the Trinity? How many Catholics would be shaken by what an evangelical Protestant once said to a Catholic friend: “If I really believed, like you say you do, that Christ himself is in that tabernacle, I’d be crawling up the aisle on my hands and knees.” How many Catholics would be able to explain to that evangelical brother that, while the Eucharist is indeed what Christ said of it and to believe that is to be awe-struck, the Lord Jesus also invites us at Mass to a personal intimacy with him in which awe is transformed into love?

Modern Catholic theology has done important work on the meaning of symbols, which are not just signs conveying a message (“Stop that car here.”). Rather, symbols are more complex realities that, in various ways, embody what they communicate – like a wedding ring or a national flag. The dumbing down of the theology of symbols has, however, led to the unhappy situation in which perhaps a majority of Catholics do not believe that the Eucharist is what the Lord Jesus said he was giving us: himself, fully and unambiguously.

Believing that, Catholics would attend Sunday Mass in droves. Teaching the truth of the Eucharist is thus a task for this moment, turning plague time into a time of renewed faith in the wonder of what we are offered in holy communion.