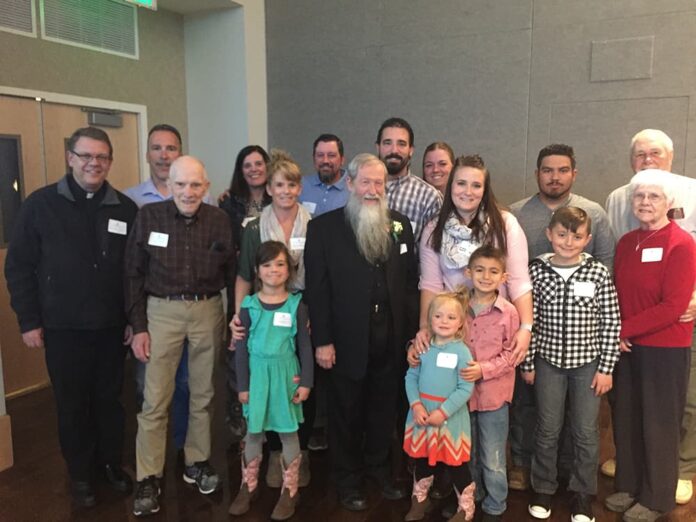 An overflow crowd of more than 150 people gathered in the Lory Center at Colorado State University March 31 to celebrate the launch of the endowment for the Father Don Willette Professor of Theological Studies, fulfilling years of effort by the beloved retired priest who dedicated much of his years of service to campus ministry in northern Colorado.

“Father Willette always made himself available to celebrate Mass for players and coaches when game schedules didn’t allow us to attend at a local parish,” explained Sonny Lubick, famed coach of the CSU Rams football team who attended the celebration. “It is great to be here to see his vision fulfilled for a full-time professor who can engage students on the impact of spirituality and religion on our nation and world.”

Father Rocco Porter, pastor of St. John XXIII Parish in Fort Collins, offered the opening prayer at the celebration. The parish is just off the campus and has launched a campaign to dramatically expand its church and student center, as well as to partner on a student housing complex.

“This program will be a great fit with our vision of engaging students and people in the greater community around the history, philosophy, and social impact of the Catholic Church,” Father Porter told the Denver Catholic. “People involved in campus ministry recognize the impact of having a professor dedicated to theological studies and it is amazing to see that being realized through the hard work and determination of Father Willette.”

Dr. Ben Withers, dean of the College of Liberal Arts at CSU, who is not Catholic, told those gathered for the reception that he was honored to work with Father Willette in creating the program.

“We live in unsettled times and it is important for universities to offer ways for students to engage around important issues on both an academic and personal level,” explained Dr. Withers. “We are in the process of searching for the right professor who will help guide this program – we are hoping to find a younger version of Father Willette,” he joked.

Father Willette, who spoke at the reception, was at St. Thomas Seminary in Denver in the 1960s when he was moved to enroll in the Air Force and served in the Vietnam War, earning multiple decorations for valor. After discharge, he returned to the seminary and was ordained in 1984 while continuing to serve in the reserves, eventually retiring as a Colonel.

Through careful stewardship of his retirement funds, and “a little bit of luck” in real estate, Father Willette was able to provide $1 million towards the $1.5 million endowment for the professorship. A number of his friends and former parishioners who attended the reception also made donations to the endowment.

“Providence rules,” Father Willette told those gathered for the reception. “My dream was to create a program where people of all faiths will have a safe space to explore their relationship with God and one another – I am grateful to Archbishop Aquila and everyone at CSU for their support that helped make this program possible.”

Denise Pfnister, who worked with Father Willette when he was pastor of St. Louis Church in Louisville, attended the reception with her extended family. “Our pastors dedicate their lives in service to us, and all of them plant seeds of hope and renewal, but few have the chance to be there to reap the harvest of their ministry,” she explained. “Father Willette walks in faith and places all his hopes and dreams with God and it is wonderful to be here today to be with him as he sees the fulfillment of his vision for this program.”

For more information on the program, visit https://source.colostate.edu/heavenly-gift-local-priest-creates-new-faculty-position-at-csu/