Ready for the big bishops meeting? Here are 8 things you need to know 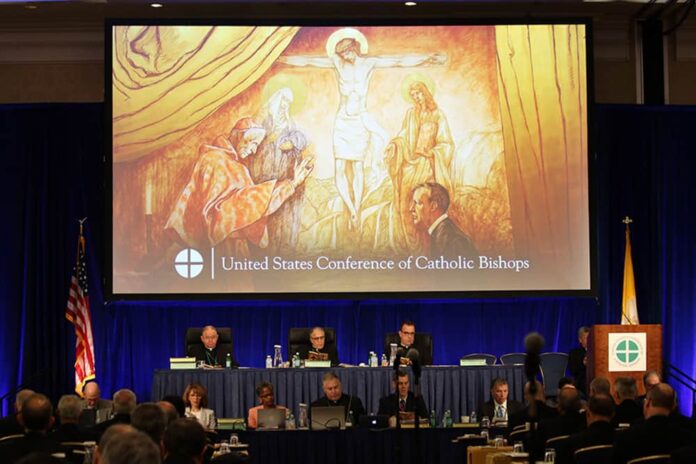 When the U.S. Catholic bishops gather in Baltimore starting today for their annual fall meeting, it will be their first in-person assembly since November 2019.

Much of the focus will be on a controversial document on Eucharistic coherence, and the final document’s possible ramifications for pro-abortion Catholic politicians, most notably President Joe Biden and House Speaker Nancy Pelosi. More on that in a moment.

First, here are eight things to be aware of heading into what promises to be one of the more closely scrutinized bishops’ assemblies in some time:

1. An unorthodox beginning. To start, the first day of the assembly on Monday is entirely closed to the media as an “executive session” — something that is typically reserved for the last day. The expectation is for a frank exchange on the Eucharistic coherence document, which is expected to pass in the end, but perhaps not before some spirited exchanges.

2. Getting reacquainted. Moving back to in-person meetings will almost certainly be an adjustment for the bishops, as it has been for everyone else. As the entire world knows by now, people tend to behave differently over Zoom than they do in real life. For one thing, it is certainly easier to hang out in one’s own office than in a stuffy ballroom while wearing a mask. The mere setting of the meeting has the potential to impact the pace and speed of the assembly.

3. Elections to watch. In addition to the Eucharistic coherence document, there will be committee chairman elections to take care of, as well as the election for treasurer and, presumably, a new USCCB general secretary, to replace Msgr. Jeffrey Burrill, who resigned in July after the disclosure of his alleged use of the gay hookup app Grindr.

While this is an off-year of sorts for elections, as the president, vice president, and secretary will be elected at the 2022 meeting, the committee elections are seen as a bellwether as for the ideological sway of the conference.

Of note, there’s the elections for treasurer of the conference, as well as for chairman-elect of the Committee on Divine Worship. The election for treasurer pits Archbishop Paul Etienne of Seattle, who is viewed as one of the more “liberal” archbishops, against Bishop James Checchio of Metuchen, who is solidly in the moderate camp. For divine worship, it’s Archbishop Mitchell Rozanski of St. Louis against Bishop Steven Lopes of the Personal Ordinariate of the Chair of Saint Peter.

Rozanski was rebuked by the committee he’s now seeking to lead back in March 2020, after he briefly attempted to permit non-priests to anoint someone who was dying. Lopes, a Latin rite priest, is the bishop of the Anglican Ordinariate, a community with its own set of liturgical traditions.

Further, the chairman of this committee will be tasked with overseeing the implementation of Pope Francis’ motu proprio Traditionis custodes restricting the use of the Traditional Latin Mass. With extremely limited exceptions, most of the USCCB has not done much to restrict the celebration of the Extraordinary Form within their dioceses. Some have said that they will “study” the matter before making a decision about what to do.

It is not beyond the realm of possibility that whoever is elected chairman-elect of this committee will move to swiftly end those “study” sessions, and force the bishops to do something tangible. Stay tuned.

4. Tie-breaker, anyone? USCCB elections for leadership positions have a history of being quite close. The election for vice president in 2019 went into several rounds of runoffs, and in a particularly amusing moment at the same assembly, a tiebreaker of “who is older” was used to elect Bishop George Murry, S.J., as head of the religious liberty committee.

For those of you keeping score at home, should that tiebreaker need to be utilized during the 2021 meeting, the winners would be Etienne for treasurer; Archbishop Thomas Wenski of Miami over Bishop Mark J. Seitz of El Paso for the migration committee, and Rozanski over Lopes for divine worship, to cite a few key races.

5. Enough is enough? Not all the action for this assembly will be taking place inside the Baltimore Marriott Waterfront, where the bishops will gather.

St. Michael’s Media, Inc., the parent company of the website Church Militant, has organized a prayer rally on Tuesday, Nov. 16, calling for the bishops to repentance for sexual abuse coverups and other offenses, at the nearby MECU Pavilion. Titled “Bishops: Enough is Enough,” the rally is scheduled to include speeches by former Donald Trump strategist Steve Bannon and political commentator Milo Yiannopolous, among others.

6. Standing up in defense of the unborn. In addition to the aforementioned prayer rally, “The Men’s March,” in opposition to abortion, will take place Monday from 11 a.m. to 2 p.m., starting outside the Planned Parenthood clinic at 330 N. Howard St. and ending outside the bishops’ hotel. The call to action on the event’s website captures the intended spirit of the march: “There is a man connected to every abortion. Men are a big part of the problem, IT’S TIME for all men to take responsibility and be a big part of the solution.” (Note to participants: Suits are required.)

7. The elephant (or is it a donkey?) in the room. Following the June 2021 assembly, one could be forgiven if they came away with the idea that the bishops had told Biden he could never enter a church again.

Of course, none of those headlines were an entirely accurate telling of what actually happened in June over Zoom. The USCCB has no power to excommunicate Biden. That’s not what a conference of bishops does, it’s not what it’s intended for, and it’s not something they would do even if they could.

That being said, back in June the bishops did vote overwhelmingly in favor of drafting a document on Eucharistic coherence. Now that they’ve done so, in preparation for the bishops to vote on it at this assembly, it’s certain to dominate media coverage of the event.

In mid-October, the draft text of the document, titled “The Mystery of the Eucharist in the Life of the Church,” leaked. An analysis of its 26 pages reveals that it doesn’t contain anything that could even remotely be considered a “rebuke” of Biden, or any politician of any political persuasion.

The only reference to politicians came in the form of a restatement of the USCCB’s 2006 statement about Catholics in public life. Further, there was no criteria whatsoever in the draft about what would prohibit a person from reception of the Eucharist. The document mainly centered on the real presence, and the Eucharist as a tool for conversion.

Of course, it’s still possible for the bishops to amend the document before it comes to a full vote. A two-thirds majority is needed for passage, and it would still need the Vatican’s approval before it could become a teaching document.

8. Tuning in. The parts of the assembly that are open to the media — Nov. 16 and 17 — will be livestreamed on the USCCB website, which will publish a full schedule of meetings and speeches.

‘Catholics Got Talent?’: Competition invites musicians to promote zeal for the Eucharist