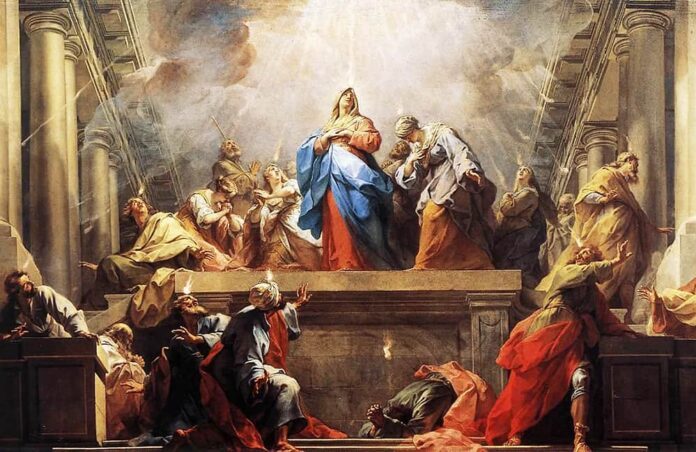 This commentary was written by Father John Nepil, a priest of the Archdiocese of Denver currently studying in Rome.

Henri de Lubac once noted a correspondence between the Reformation’s criticism of Mary and those of the Church. And it is in some sense logical – you can’t have Mary without the Church, nor the Church without Mary. They exist in such an intimate and mutual relationship, that one cannot be fully understood without the other. And we see clearly enough in our present day what happens when they are separated: Mary, elevated in excess, loses her humanity and appears as a quasi-fourth-person of the Trinity; and the Church, reduced in excess, loses her divine foundation and appears as an exclusively male-run institution.

This is far from the vision of the early Church, where Mary and the Church were viewed together as a single reality — the New Eve. Jesus Christ, the New Adam and the true spiritual father of mankind, fittingly chose a New Eve to be his helpmate and the true spiritual mother of mankind. This New Eve has two forms: the personal form of Mary and the collective form of the Church. But Mary precedes, being the Church in seed-form before Pentecost. She alone was given the singular grace of her Immaculate Conception in order take on the unique role as the Mother of God. She stands at the foot of the Cross, as the Church but also more than the Church; for she personally participates in her Son’s redemption and his foundation of the Church. At Pentecost, Mary’s mediating maternity becomes the heart of the Church, permeating it with an all-encompassing Marian character. Mary is the Church’s mother, and in her, the Church is mother. For this reason, we can marvelously say — through Mary’s divine motherhood, the Church gives birth to Christ sacramentally in the Eucharist and spiritually in souls!

This beautiful vision of Mary and the Church was lost to modern man until the Second Vatican Council (1962-1965). There, the treatise of Mary was placed within that of the Church, restoring the ancient relationship (cf. Lume Gentium, Ch. 8). But with that came a tragic turn. After the council, Mary was dissolved into the Church, and Mariology went into a post-conciliar winter. The modern Catholic sentiment towards Mary changed – now we were “rid” of the shame of our bizarre medieval fixation. Now she was finally “one of us” – relatable, authentic, truly in the Church. But Pope Paul VI, with prophetic intuition, saw through this theological illusion and countered it by declaring that “the Blessed Virgin Mary is the Mother of the Church” (Paul VI, Address, 21 November 1965). If Mary is the Mother of Christ, and the Church is the Body of Christ, then Mary is the Mother of the Church. He knew, as did his successors, that the defense of Mary’s dignity is intimately tied to the preservation of the faith’s integrity.

On March 3, the Vatican announced that Pope Francis had decreed a new liturgical memorial. Beginning this year, on the Monday after Pentecost (May 21 this year), the Church will universally celebrate Mary as the Mother of the Church. By this, the Church is not merely encouraging Marian piety, but inviting us to see more deeply the Marian character of the Church’s maternity.

St. Leo the Great formulated this 15 centuries ago on Christmas: the birthday of the Head is the birthday of the body (Sermon 26, De Nativitate). Meditating on the unique Christian mystery of the Incarnation reveals the pattern of all divinization – re-birth in the order of grace. And birth always requires a mother. To celebrate liturgically Mary as the Mother of the Church is to weave into an organic unity the cross, the Eucharist and maternity. Only through them does one “quit the old paths of his original nature and pass into a new man” (St. Leo). And in our age of self-reliance and neo-pelagianism, perhaps we would do well to quit another old path, that of Marian minimalism, and pass into the newness of this feast, celebrating with joy and filial love, Mary, Mother of the Church.