His Church. Our Experience.
Subscribe
HomeLocalQ&A: St. Joseph is the secret weapon the Church and society needs
LocalQ&AYear of St. Joseph

Q&A: St. Joseph is the secret weapon the Church and society needs 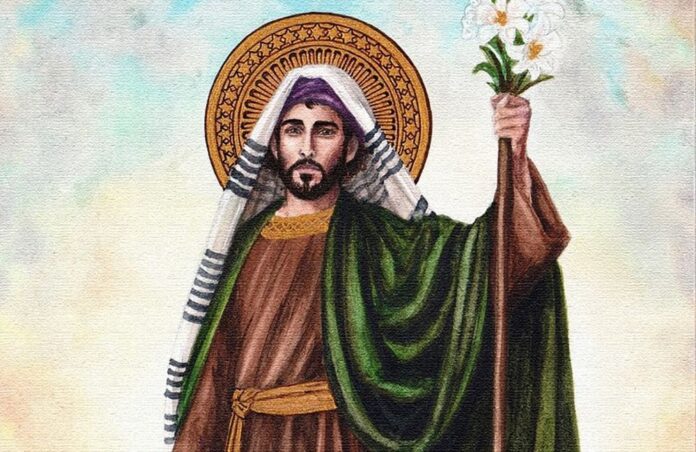 Ever heard of a Consecration to St. Joseph? Neither did Father Donald Calloway, MIC. So, he decided to do something about it.

In his groundbreaking new book, Consecration to St. Joseph: The Wonders of Our Spiritual Father (Marian Press), Father Calloway dives into some of the lesser-known and extraordinary qualities of the oft-underrated father of Jesus. It culminates in a consecration to St. Joseph, who, whether we realize it or not, is our spiritual father. This year especially marks an opportune time to renew and strengthen our devotion to St. Joseph, considering that March 19 marks the 150th anniversary of St. Joseph being declared the Patron of the Universal Church. For the book, Father Calloway also commissioned several artists to create beautiful, updated depictions of St. Joseph.

We chatted with Father Calloway about his new book and why a consecration St. Joseph might just be exactly what our society and Church needs in this time of crisis.

Denver Catholic: Why did you want to write this book?

Fr. Donald Calloway:  Right now in the world, we’ve got what I call an anthropological crisis. People are confused about their sexuality, about what it means to be a man, what it means to be a woman. Marriage has been redefined in many countries. People don’t even know what it means to be a family anymore. You know, we’ve got modern families and we’ve got people identifying as cats. It’s crazy. So, I thought to myself about three years ago, what are we doing here as Christians? We belong to Jesus Christ by our baptism and many of us have done a Marian consecration, which is phenomenal. It’s one of the best things you can do. Still, we don’t seem to be making much ground when it comes to this crisis today. Sister Lucia dos Santos of Fatima said that the final battle between good and evil would be over marriage and the family. So I thought to myself, I wonder if there’s anything about St. Joseph, like a Saint Louis de Montfort-type consecration program, because when a house is in disorder, and by that I mean society and even the Church, it takes a father to restore order in a house. I thought, does this thing exist out there? Is there some gem hiding in Poland or Croatia or something that nobody knows about that we can get out there? I know a lot of people around the world, so I contacted them. I said, hey, have you guys got anything like this in your country, like a Saint Louis Montfort-type consecration, not to Our Lady, but to St. Joseph? Everybody said no, and everybody also said, ‘Father, that’s brilliant.’ They said this is exactly what the Church needs right now in the midst of this crisis and confusion. We need St. Joseph as a good, loving father. And so I said, ‘you know what, I’m gonna do it then.’ So I’ve spent the last three years doing all the research and writing and putting it together. DC: Very little is known about St. Joseph. How did you conduct research and learn more about who he was?

FDC: That’s a great point. First, I wanted to clear up a whole bunch of misconceptions about St. Joseph, since we don’t have much about him — we don’t even have one word in the New Testament. Most people over the centuries have just thought that he was some old geezer who God used and basically was a nobody and really is not that important. And even in art, he’s shown as old and almost headed for the nursing home. So I asked, ‘was this guy old? What is the reality here?’ I did a lot of digging, a lot of research. I went to the Fathers of the Church. I went to St. Jerome and St. Augustine, and I went to all these scholars and saints and then also writings of mystics and popes. And lo and behold, none of this stuff is true. The church has no teaching on his age whatsoever. In all likelihood, he couldn’t have been old because of the rigors demanded by him with all the walking they did back then. I did the math: for the 30 years that they walked to Jerusalem three times a year, which they were required to do from Nazareth, Joseph and Jesus basically walked around the planet. There’s no way an old man could do that. There’s just no way. And so I just explored all these writings and things from the time of Jewish culture and customs and everything to really get a fuller picture of who he is.

DC: What are some qualities of St. Joseph that you uncovered in writing this book?

FDC: That he’s the greatest saint after the Blessed Virgin Mary! A lot of people don’t realize that. They think it’s Saint Francis of Assisi or the Little Flower or something. And look, they’re awesome, but they’ve got nothing on this dude. I mean, he is so holy that only he and Our Lady have the privilege of referring to God as their son. You and I can’t invoke Jesus and say a prayer and say, ‘Jesus, my lord and son.’ That’s weird, right? But Mary and Joseph can. Joseph has a paternal relationship with Jesus. And he has power. He has intercessory ability that is unparalleled after Our Lady. That, to me, is extraordinary. And that’s why one of his titles in particular that I talk about in the book is Terror of Demons, because that’s the money title. That’s the big gun title. A lot of people would not think of him like that because they see images where he’s old, got a cane and he’s about to die. If you know who he is and the power and the authority and the influence that he has with God, it’s unbelievable. He is the untapped treasure, the secret mega weapon that the Catholic Church has had in the background for 2,000 years. And now, in light of the crisis, we need to bring out the big guns. This is the man.

DC: Why does St. Joseph make a good patron of the Universal Church? Why is his intercession so important right now?

FDC: It goes basically to the roots of what that patronage means. The root word of patron is pater, which means father. That was declared in 1870, and since that time we have consistently seen divorce rates go up as well as fatherless families. Right now, statistics are saying something like 52 percent of all modern families do not have a father — that’s more than half. We’ve known about the spiritual motherhood of Mary for a very long time. And it’s wonderful. But in order to close the gap and to help with this crisis in families, we need to look to THE family, and especially the head of the Holy Family and his patronage and ability to help us. That’s why I think ever since that declaration was made in 1870, we have seen a nonstop increase in emphasizing the importance of St. Joseph. DC: Why should people read this book and engage in this consecration?

FDC: Ultimately, it’s to lead them closer to Jesus. Just like Marian consecration, ultimately it’s to lead us closer to Christ. That’s the same with this. And it’s really to imitate our Lord himself. In the New Testament, we read that Jesus increased in wisdom and stature before God and man under the watchful care of his parents in his human nature, of course. We need to do the same. We’re not members of a single-parent spiritual family. We need to recognize that Mary is our spiritual mother and St. Joseph is our spiritual father. And it’s time now for St. Joseph. It’s his time.