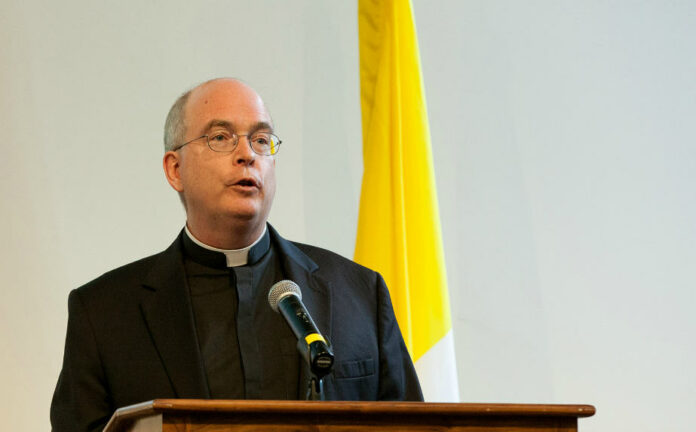 The November release of the film Spotlight brought the 2002 sex abuse scandal in the Archdiocese of Boston back to the, well, spotlight. Though the film does a good job of focusing on the efforts of the Boston Globe journalists to bring the scandal to light, it fails to address the many steps the Church has taken since then to combat sex abuse.

In March 2014, Pope Francis established the Pontifical Commission for the Protection of Minors, a special commission tasked with implementing policies and changes which will better protect minors from all forms of sex abuse. In September 2014, the Holy Father appointed Monsignor Robert Oliver of the Archdiocese of Boston as the new secretary of the commission.

Monsignor Oliver served in the Archdiocese of Boston during the 2002 scandal, so he knows how to deal with this pressing issue firsthand and brings invaluable experience to the Vatican. Monsignor Oliver is serving as the keynote speaker for this week’s National Safe Environment Coordinator’s Conference taking place in Denver.

Denver Catholic contacted Monsignor Oliver for an email interview ahead of his visit to Denver regarding what the Church is accomplishing in the way of combating sex abuse of minors.

Denver Catholic: You’ve been in the new position of the secretary of the Pontifical Commission for the Protection of Minors for over a year now. Why was this position created, and what new policies and changes have you implemented to combat child sex abuse?

Monsignor Robert Oliver: Pope Francis instituted the commission with the goal of assisting the Holy Father and local churches to make the Church a safe place, by promoting local responsibility for the protection of all minors and vulnerable adults. The role of the secretary is to assist the president and the members in this important work. We are currently focusing our efforts on three primary areas: assisting conferences of bishops and conferences of religious with their guidelines for child protection, developing educational resources for local Churches, and providing resources to areas with particular need.

DC: What are your goals in this new position?

RO: The Guidelines Project is especially important. Each conference of bishops around the world is working with the Congregation for the Doctrine of the Faith on developing their policies and programs for child protection and providing for the healing and care of victim/survivors of abuse. The members of the commission and our collaborators are able to offer their assistance to bishops and religious superiors as these guidelines are developed and updated. We are also able to promote the sharing of best practices in these fields and particularly to help countries with fewer resources.

The second area we are currently developing is the training, education, and formation programs. Over the past year, we have provided programs to bishops’ conferences in the Philippines, Scotland, Great Britain, Ireland, Poland, New Zealand, Oceania and Central America, and in the coming year we plan to begin working with the Symposium of Episcopal Conferences of Africa and Madagascar (SECAM), the Consejo Episcopal Latinoamericano (CELAM), and the Federation of Asian Bishops’ Conferences (FABC).

Our third primary goal is to establish a foundation to provide resources for developing churches, especially in Asia, Africa and Latin America. In addition to soliciting private donations, we will be applying for qualifying grants from child protection institutes and programs.

DC: What can other organizations learn from the Church’s approach to preventing sex abuse?

RO: The work of our commission extends to all children, not just those in Catholic families. As is becoming well known, the rate of the sexual abuse of children around the world is devastating, perhaps as many as 1 in 4 girls and 1 in 9 boys.

Over the past 30 years, the Catholic Church has learned a great deal about child protection, and we have successfully implemented policies and programs that make a real difference. Around the world, we are now cooperating with a wide variety of religious, government, and non-governmental organizations. We are able to learn from them and to share with them the things that we have been doing which do indeed work, as well as the things we tried in good faith but which were less successful. There is much to be learned together and in cooperation with one another.