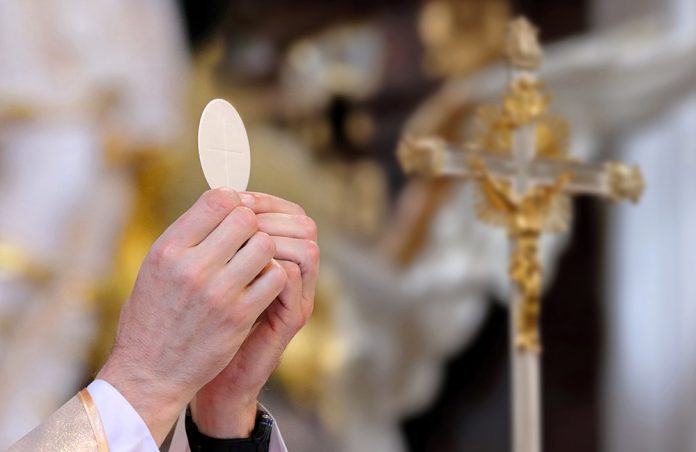 In many ways, the Catholic Church is at an inflection point in America. Amid the shifting bedrock that is American society, the Church is an unwavering symbol of hope — or at least, that’s what it’s supposed to be. As recent years have shown, even the Church is not immune to controversy or scandal.

Most Catholics can agree that the Church is in many ways not what Christ intended it to be. This is no different than at any point in her history — it is a perfect institution entrusted to imperfect people. Yet, grace abounds, and the Church is never beyond saving. What most Catholics may disagree on is how to redirect the Church to truly be the symbol of hope that she and all those who count themselves among the body of Christ ought to be.

Is it any coincidence that the Church has lost her moral ground in the eyes of many during a period of time where belief in the Real Presence of Jesus in the Eucharist — which the catechism distinctly calls the “source and summit of the Catholic faith” — is at an all-time low? The U.S. bishops don’t seem to think so, which is why they have called for a Eucharistic Revival in the American Church. This national movement will culminate in a Eucharistic Congress in Indianapolis, Ind. In 2024 — the first in 48 years.

Tim Glemkowski, who has worked under Archbishop Samuel J. Aquila as the Director of Strategy for the Archdiocese of Denver over the past several years, recently left his role at the archdiocese to spearhead the upcoming Eucharistic Congress as its executive director. He remains in Denver, but will be involved in every aspect of this important and even essential initiative whose sole focus is to revitalize an encounter with Christ in the Eucharist among the faithful.

We sat down with Tim to learn more about the Eucharistic Revival, why it’s happening now, and how Catholics can get involved. Rest assured, there will be much more to come!

Recent polls show that many Catholics do not believe in The Real Presence of Christ in the Eucharist. What do you think has led to this “suspension of belief”?

Tim Glemkowski: I think there are a variety of factors. One obvious one is that, generally speaking, the Church’s teaching in this area has not been presented in a systematic and convincing manner! My first ministry position was teaching theology in a Catholic high school. In my Sacraments class, I would unpack the clear and significant Scriptural basis that underscores the doctrine of Jesus’ Real Presence, body, blood, soul and divinity in the Eucharist. For many of my students, sophomores who had grown up in Catholic homes and attended Catholic grade schools, it was their first time ever seeing this connection. ⊲

Another factor is the overall loss of faith and a sacramental imagination of reality in our increasingly secular world. Jesus’ substantial presence in the Eucharist is hidden under the appearance of bread and wine; his Real Presence is apprehended only through the eyes of faith. That is just a hard thing for many today who feel that “if I cannot see it, I cannot believe it, so it must just be a symbol.”

For me, this is why one of the keys of this Revival has to be to propose what Archbishop Aquila has called here the “re-acquiring of a biblical worldview” that sees all of reality through the story of what God has done for us in Jesus Christ. We have to help folks see that faith is not opposed to reason; that belief does not mean “made-up” or “fairy tales.” It means God himself has told us, in the “words and deeds” (Dei Verbum 2) of Jesus Christ who he is, how he wants us to live, and how he wants to be with us “until the end of the age.”

The decision of faith then, is to trust that he is not deceiving us, that what he says is true, in the same way we trust the testimony of anyone on matters we cannot come to an awareness of simply through our senses. Without verifying it myself, I believe Australia is where it is because I trust that Rand McNally is not lying to me; in the same way, I trust and believe that Jesus is really present in the Eucharist because I trust that he is telling the truth. This is what Peter means at the end of the John 6’s Bread of Life Discourse, after so many walk away, when Jesus asks if the apostles will leave him too, because of this teaching. Peter responds, “Lord, to whom else will we go, you alone have the words of eternal life”; Basically, “I trust what you are saying because I trust you as the witness.” We have to recover this sense of faith today.

What is the idea behind the Eucharistic Revival, and why have it now?

Tim Glemkowski: The Eucharistic Revival is a grassroots three-year movement, undertaken by every member of the entire U.S. Church and inaugurated by the bishops, responding themselves to what I believe is a clear invitation of the Holy Spirit to be “healed, converted, unified, formed, and sent” by a renewed encounter with Jesus present in the Eucharist.

Over the next three years, dioceses, parishes, apostolates, movements, orders and more will link arms in order to invite the Church to a deeper relationship with Jesus, who is present in the Eucharist. That includes catechetical, devotional, evangelistic and service elements. Each diocese and parish will be invited to pray and discern God’s plan for how he wants to bring Revival to their local church and everyone is invited to participate however God is calling them to do so.

To me, Revival is something that God does. In certain times in the history of the Church, he has sent seasons of renewed fervor and missionary dynamism that reinvigorates the faithful and brings many to initial faith. I hear, in the bishops’ invitation to a Eucharistic Revival, an openness to respond to the initiative of God in our Church today, and his own plan and desire for Revival through a greater awareness and love for the Eucharist.

We know that Pope Francis has called the Church, in our new apostolic age, to a fundamental missionary stance, flowing from an initial encounter with the person of Jesus Christ. What better place for that encounter to come than with Jesus present in the Eucharist?

What can Catholics do to re-acquire and reinforce their own belief in the Real Presence?

Tim Glemkowski: My personal growth in love and belief in the Real Presence of Jesus in the Eucharist has largely come from two things: (1) attendance at daily Mass and regular adoration and (2) regular study of the teachings of the Church on the Mass and the Real Presence. I think we can take this invitation to a Eucharistic Revival over the next three years as a challenge to pursue a more regular and refreshed encounter with Jesus in a quiet holy hour or an early Mass at our parish.

I remember reading Scott Hahn’s Lamb’s Supper after my conversion at age 18 and it changing my perspective so much of what is really happening at the Mass. Another book that had a significant impact on my belief in the Real Presence of Jesus in the Eucharist is Brant Pitre’s Jesus and the Jewish Roots of the Eucharist. I recommend that people visit eucharisticrevival.org in order to learn more about the “source and summit” of our faith as Catholics.

This revival will culminate in a Eucharistic Congress in 2024. What will that event entail?

Tim Glemkowski: I am very honored and excited to lead this initiative in my new role as executive director of the National Eucharistic Congress. We used to regularly, as a Church, have these Congresses in the United States, and our last one was 48 years ago in Philadelphia. The keynote speakers that week were Pope St. John Paul II and Mother Teresa. I think it is past time to revive today this important part of how the Church in the United States glorifies God and is transformed as a people. ⊲

The National Eucharistic Congress will be a milestone moment in the three-year Revival. Two years of pilgrimage as a body will lead to this significant experience and then the third year of the Revival, the Year of Mission, will flow from it. This will be a uniquely transformative and unifying event where the Church from across the United States will gather together in order to worship and glorify God. We know here in Denver, through the experience of WYD ’93, the kind of lasting impact these big gatherings and moments can have.

Upwards of 80,000 Catholics will gather in Indianapolis from July 17-21, 2024, to pray together, hear dynamic preaching and rich formation, experience healing and be sent on mission “for the life of the world.” As I take on this new role, I have a sense that God is going to do something very big and important over those five days in Indianapolis. I hope to see many attendees from my home archdiocese of Denver there!

What do the bishops hope results from this long process of the American Church embarking on this Eucharistic journey over the next several years?

Tim Glemkowski: We talk here in the Archdiocese of Denver about an “apostolic mindset” — the recognition that it is through the lives of individual missionary disciples who see everything differently that the world is changed. My hope in the fact that this movement will have a lasting impact comes from my belief that God will change many lives and heal many hearts through it, and it will be these modern-day apostles, Eucharistic Missionaries, that will be the first fruits of the Eucharistic Revival.

Ultimately, what is the goal of anything we do as a Church? Increased love of God and love of neighbor. Our world is desperately in need of saints, Catholics whose lives have been given over entirely for God in a way that goes out to the margins and provides a compelling witness of the fact that Jesus Christ rose from the dead and moves in the world still today.

I think, overall, the bishops hope to address some of the fundamental catechetical crisis of belief in the Real Presence and help the whole Church to come to a deeper unity and healing through the grace present in the sacraments. It is hard to imagine how we can proclaim Christ to the world if the fundamental doctrine of our faith is only really understood and believed in by about a third of our membership. Part of our task at the National Eucharistic Congress organization will be to capture and perpetuate all of the fruits of the three-year Eucharistic Revival and continue to carry out that work of the Revival in an ongoing way. I think there was a brilliance on the part of the bishops in setting up this organization that can continue to do just that.

Archbishop Aquila has talked a lot here in the archdiocese about the notion that “God has a plan.” I think, if we open ourselves to his working, God is going to move powerfully in ways that we do not even anticipate over the next three years, and I am excited to watch it happen.

LEARN MORE
Visit eucharisticrevival.org and stay tuned to Denver Catholic for the latest!