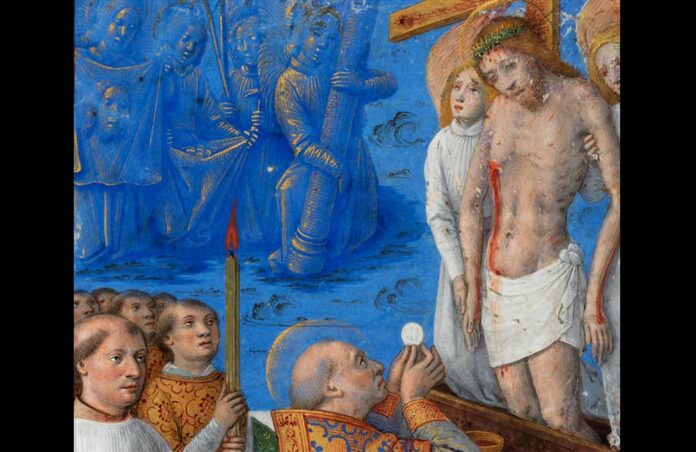 Father Daniel Cardó, S.C.V., pastor at Holy Name Parish and professor at St. John Vianney Seminary, shared with the Denver Catholic his experience of publishing his most recent book The Cross and the Eucharist in Early Christianity: A Theological and Liturgical Investigation with Cambridge University Press, and his contributions to current debates regarding the liturgy, some of which include the view of the Mass primarily as a meal, the Sign of the Cross in the Roman Canon and the use of an altar Cross. Holy Name Parish will host a book signing event March 5 at 7 p.m. with Father Cardó and Dr. Sean Innerst from the St. John Vianney Seminary, in which discounted copies will be available.

The interview has been edited for conciseness.

Denver Catholic: What was the seed of this book, what led you to research the Cross and the Eucharist in Early Christianity?

Father Daniel Cardó: After I finished my master’s thesis, which allowed me to work on the theology of Joseph Ratzinger, I continued reading some of Ratzinger’s books, particularly those on the liturgy, when I was still the chaplain at Camp St. Malo in Allensapark.

In doing that, I had a very profound personal experience. I had a moment of finding my vocation within my vocation, something reading Mother Teresa’s life helped me understand – but with immense differences, of course. With this experience I understood that what Pope Benedict said was absolutely true, and that I needed to take it seriously. One of the phrases that impacted me the most was: “The Church stands or falls with the liturgy.” There’s nothing more important than the liturgy. And I thought, “If this is true, I need to spend my energies as a priest mostly in trying to offer contribution for the sacred liturgy.”

It was not a just an intellectual experience, but a very personal one. And the consequence was that maybe I needed to continue more technical studies in the liturgy. So, I found a distance program at the Maryvale Institute in Birmingham, where I obtained my doctorate, and wrote my dissertation on the presence of the Cross in the Eucharist from the 4th to the 8th centuries, which was a decisive period of dogmatic and liturgical development. This book was completed after three more years of rethinking and updating my dissertation, so they’re ideas that have developed over a period of eight years.

DC: You argue that the patristic and liturgical writings form the 4th to the 8th centuries show that we need the Cross in order to understanding the Eucharist. What were some of the most revealing aspects that you found in your research?

FDC: I found that for the Early Church there were things that were not only common but self-evident that are not part of our formation, catechesis or preaching anymore. Things like “the Eucharist comes from the Cross,” “I am fed from the Cross,” “I should approach the chalice as if I were drinking from the very open side of Jesus,” “see in the bread what hung from the Cross,” etc. It’s very strong, very beautiful, but somewhat of an emphasis that I think we’ve lost today.

Part of what motivated me to start this research is also the fact that for the most part people understand the Eucharist as a community, getting together and celebrating our faith. But that’s a very foreign idea for the Early Church. They saw the Eucharist mostly as the sacrifice of Christ to which we’re invited and in which we partake – and that’s what builds the Church. But the emphasis was that, first and foremost, in the sacrifice of Jesus that is renewed in a mysterious way, and form which we are fed. That was very evident as I started reading all the Church Fathers and liturgical texts from the period.

DC: What are some of the contributions to current debates regarding the Eucharist and the Cross that you make in your book?

FDC: I offer three contributions because I realized that in these many texts, you could say the Cross was present in three ways in the context of the Eucharist. The first way, is the Cross as an idea – in homilies, catechesis, etc. Then I realized this idea of the Cross could offer contribution to a common current debate, mainly whether the Mass is primarily a meal or a sacrifice. My solution is that the idea of the Cross present in the Eucharist brings a solution to that apparent contradiction. Because the Eucharist is the sacrifice of the Cross renewed for us, then we are fed from the Cross. There is a mention of a meal, but the priority is the sacrifice.

The second contribution is related to the second way in which the Cross is present in the Eucharist: as a gesture. It’s very, very ancient. But it really puzzled me: Who says that when we think about a blessing, we need to make the sign of the Cross? No one explains that in one sense, but we have always done it. So, after doing much research, I realized that for the Early Church, the gesture of signing with the Cross the bread and wine – just as the foreheads of those going to be baptized and the oil, etc. – was not just a “symbolic action” that reminds us of the passion, but an effective action. That made me think about a common discussion that happened in the 20th century regarding the epiclesis, when the priest imposes his hands on the bread and wine, invoking the Holy Spirit. Many theologians were concerned because in the Roman Canon, which is the most ancient and traditional, there is not really an epiclesis that invokes the Holy Spirit, so, many thought it was a defect. But my proposal is that, actually, the sign for the cross that has always been done in the Roman Rite is the equivalent of the epiclesis, in so far as it sanctifies the bread and the wine invoking God, in an action that will be concluded with the words of the institution.

The third one is related to the third way of presence of the Cross in the Eucharist, which is in the form of a visible object, on or around the altar. Should we place a Cross on the altar or not? Historically, many people have said that it was a very late development around the 12th century, but I was able to find texts from the fourth, fifth, sixth centuries that in all probability do speak about a Cross on the altar, and I think that is relevant. But going into the more theological aspect of the problem, I was able to see that those who reject the practice of placing a Cross on the altar emphasize that the presence of Jesus is in the community and in the priest. And that’s very implicit in their critiques. Whereas, those who think that it is good to do what we have done for many centuries, and that is to have a Cross visible next to the altar, understand the Eucharist more as the renewal of the sacrifice of Christ, and that we are fed from the Cross. And therefore, it only makes sense that we do have a Cross at the Altar as a reminder of what happens here. This finally, is also important in the common setting of the Churches after the Second Vatican Council, in which the Mass is celebrating facing the people. Of course, the risk is that the gazes of people and priests are facing each other and therefore we become a closed circle, rather than facing together towards the Lord.

DC: Cambridge University Press is a very prestigious publishing house in academia, how is someone published there, and what was that process like for you?

FDC: I know someone who was in the process of publishing a book with Cambridge, so I asked her about the experience, and she said they were very kind and open from the beginning. I emailed the editor for humanities, and a few days she said she wanted to take a look at it, so we started the process.

It’s very lengthy but very detailed-oriented. The editor has to find it interesting, you present a formal proposal, and then you send the text. If the editor approves, they send it to two independent, anonymous peer reviewers – which is the standard for academic press – who write a review and give their opinion. They have to approve, but you still get good feedback from experts who probably have more experience than you. If they are favorable, then the final step is the approval of the syndicate of the press, which meets at Cambridge. Thank God they liked it and approved the book for publication.

DC: You mention that even though your book is primarily academic, it can also help people in prayer and preaching. How so?

FDC: The book clearly comes from academic research, but I think it’s understandable. I think that one of the more important contributions is the presentation of a lot of beautiful wonderful texts from the Early Church, some of which have never been translated into English and that are present in the book for the first time in English. And I think that it will be for great benefit for any committed Catholic who wants to learn more about the Eucharist, to read what our Fathers said. It’s very beautiful and very healthy to gain greater familiarity with what the Early Church said about the Eucharist – how they saw the it, how they celebrated it – so that we can learn those lessons for today. There are a lot of beautiful texts that I’m sure will be very beneficial for any Catholic who wants to pray and also for priests and deacons who will find jewels in what the great saints and ancient books of liturgy contain.