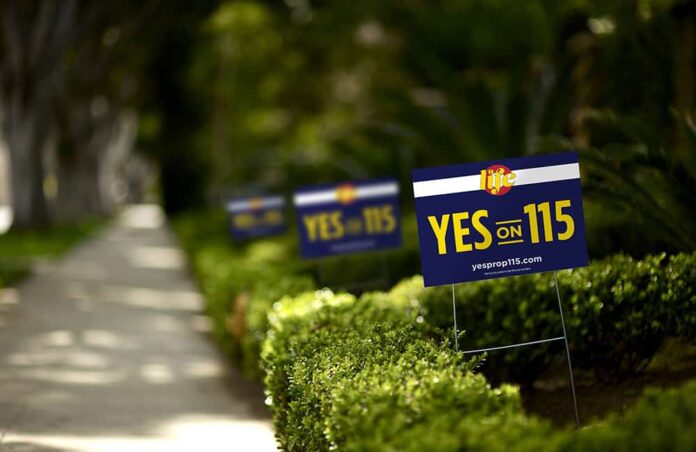 In a tough loss for Colorado’s pro-life community, Proposition 115, a proposed ban on late-term abortion in Colorado, failed on election night.

Proposition 115 would have banned abortion after 22 weeks of pregnancy, changing the current Colorado law that allows babies to be aborted for any reason up to birth. The proposition would have allowed for an exception if the mother’s life is at risk. Under the proposed statutory change, a physician performing a prohibited abortion would have been subject to a three-year license suspension, but it would not have imposed any penalty on a woman receiving an abortion.

“Despite the disappointing result, the campaign to pass Proposition 115 has demonstrated that support for human life at every stage is widespread across our state,” Archbishop Samuel J. Aquila told the Denver Catholic. “I am deeply grateful to the thousands of people who worked tirelessly to pass this measure, and for all those who care for mothers, fathers and children in need, including many Catholic institutions and individuals. I pray that we will soon see the day when Colorado embraces a culture of life and recognizes the dignity of every human life at every stage of life, from conception to natural death.”

Propelled by an enthusiastic grassroots campaign that was carried out largely in the middle of a global pandemic, Prop 115 would have been a huge pro-life victory in the state that was the first to liberalize its abortion laws in 1967. Today, it remains a destination for late-term abortions. Colorado is one of only seven states that currently has no restrictions on abortion.

In order to get Proposition 115 on the ballot, petitioners had to gather a minimum of 124,632 signatures over a period of six months, beginning in December 2019. All told, they ended up delivering upwards of 150,000 signatures to the Secretary of State, securing its place on the ballot.

“Volunteers gathering petition signatures were utterly heroic in spite of the pandemic” Lynn Grandon, Program Director for Respect Life Denver, told the Denver Catholic earlier this year. “We were charged with gathering 10,000 more signatures during the stay at home orders from the Colorado governor in only a two-week time frame. The totals were nothing short of miraculous – 48,000 signatures were added.”

Prop 115 marks the fourth time petitioners were successful at getting a pro-life initiative on the ballot. In 2008, 2010 and 2014, Colorado voters rejected attempts to introduce a personhood amendment into the Colorado state constitution. There were also various efforts to enact similar laws before 2000.

Despite the loss, the Colorado pro-life community wants women to know that abortion is not the only option, and that they will continue to advocate for the dignity of both moms and babies.

“While Proposition 115 was defeated at the ballot, we’re grateful that more than 1.1 million Coloradans voted to end late-term abortion,” Grandon said. “Most important is that women vulnerable to abortion know that there are life-giving options available. The ongoing need to educate and advocate continues. Every day that passes means more lives are lost. The mobilization to help moms and save babies will continue to be our top priority.”

For those women who are experiencing an unwanted or crisis pregnancy, you are not alone. Marisol Health and Bella Health + Wellness are two women’s clinics that work to uphold the dignity inherent in every human person with a sincere compassion for life, and they can help you. Contact Marisol Health at 303-320-8352 (Denver) or 303-665-2341 (Lafayette), and contact Bella Health + Wellness at 303-789-4968.