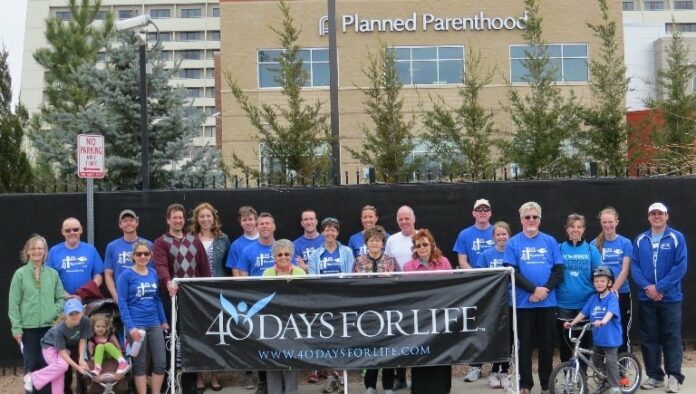 The west coast arm of the LIFE Runners’ A-Cross America Relay, pictured here, reached Denver March 30 after starting at the Golden Gate Bridge on Ash Wednesday, March 5. While in town, members of the relay team stopped at Planned Parenthood of the Rocky Mountains headquarters at 7155 E. 38th Ave., the abortion provider’s second largest facility nationwide, where Father Chris Uhl, pastor of Holy Ghost Church, celebrated Mass to pray for an end to abortion.

LIFE Runners, the world’s largest pro-life running and walking team, also ran “prayer-filled” laps around the facility, according to Scott Casmer, Colorado Springs LIFE Runners Chapter Lead. They concluded by praying the LIFE Runners Creed before sending the next relay runners towards Wyoming.

The relay will continue through Palm Sunday, April 13, when the finale will be celebrated in Sioux Falls, S.D. There the west coast arm will join with the the east coast arm that started on the Brooklyn Bridge the same day. Over the 40-day relay, coinciding with the latest 40 Days for Life campaign, nearly 1,103 legs and 4,089 miles will be covered by 2,400 LIFE Runners across the country. For more information, visit http://relay.liferunners.org.