Priesthood and the renewal of the Church 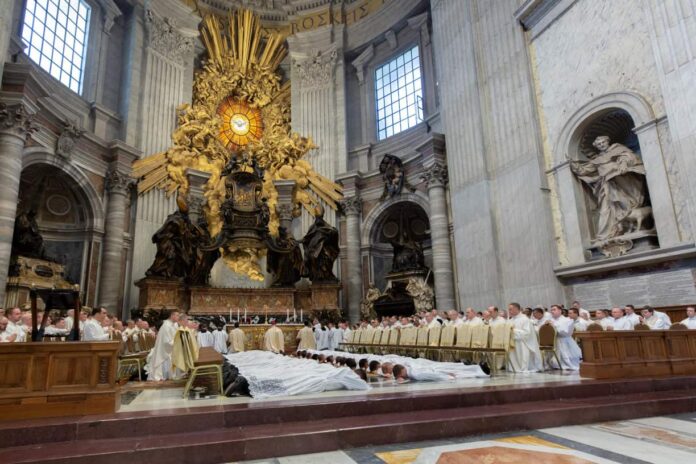 Debates about celibacy have recently been in the forefront of conversations regarding the Church, given the ongoing fallout of the abuse crisis and the meeting of the Synod of Bishops for the Pan-Amazon region in the fall of 2019. Although the synod sought to confront the general pastoral difficulties of the Amazon region, stretched over many South American nations, European prelates focused excessively on changes to the priesthood and ecological problems. The final synod document, for instance, recommended the ordination of vir probati (mature married men) to the priesthood to overcome a shortage of priests in the Amazon mission territory. Pope Francis, however, decided not to address the issue of celibacy in his own summary of the synod within the Apostolic Exhortation, Queridia Amazonia, released this last February.

Many people have wondered if a married priesthood could benefit the Church in terms of enabling more men to pursue the priesthood and by bringing family life experience into ministry. One case for this change, drawing on the experience of the Eastern rites of the Church, which do have married priests, can be found in Adam A.J. Deville’s Everything Hidden Shall Be Revealed: Ridding the Church of Abuses of Sex and Power (Angelico, 2019). Deville, a professor and subdeacon in the Ukrainian Catholic Church, proposes renewal by returning to older structures of synodal governance within the Latin rite, by far the largest rite of the Church. Looking back to St. Paul’s Pastoral Epistles, Deville argues that married life provides a strong foundation for leadership within the Church, the household of God, as “the daily demands of raising children … strips a man of self-centeredness faster than just about anything” (107). The book seeks to provoke a discussion on reform of Church leadership and the role of the laity, attempting to foster greater openness and transparency, as well as collegial approaches to governance.

Cardinal Robert Sarah and Pope Emeritus Benedict XVI strongly disagree, however, that any practical benefit of a married priesthood would outweigh the intrinsic spiritual reasons for celibacy. Together, they wrote an appeal to the Church in light of the Amazon synod, From the Depths of Our Hearts: Priesthood, Celibacy, and the Crisis of the Catholic Church (Ignatius Press, 2020). They link the priesthood to the complete gift of self expressed in the Church’s worship and Christ’s offering within the Eucharist. In the first part of the book, Benedict argues that “the cultic act proceeds by way of an offering of the totality of one’s life in love. The priesthood of Jesus Christ causes us to enter into a life that consists of becoming one with him and renouncing all that belongs to us” (26). In the Old Testament, ritual purity required abstinence during priestly service. “But because of the regular and often even daily celebration of the Eucharist,” he continues, the entire of life of priests “is in contact with the divine mystery. This requires on their part exclusivity in relation to God” (41). There is an ontological conformity of the priest to Christ, so that the priest must “continually be purified and overcome by Christ so that he is the one who speaks and acts” through him (59).

In Cardinal Sarah’s longer section of the book, he offers an appeal for renewal: “Dear priest, dear seminarians, let us not allow ourselves [to] get caught up in haste, activism, and the superficiality of a life that gives priority to social or ecological commitment, as though time dedicated to Christ in silence were lost time. It is precisely in prayer and adoration in front of the tabernacle that we find the indispensable support for our virginity and our priestly celibacy” (130). He contends that a greater emphasis on evangelization and prayer will bear more vocations to the priesthood and will bolster the Church’s mission in this difficult time (120). He specifically responds to the married priesthood of the East, seeing it more as a later historical concession than a norm, and contends that even within the Eastern rites, a celibate monasticism and episcopacy retain a spiritual preeminence (81). Sarah argues that celibacy provides a necessary sign for all people, including those of Amazonia, calling not only priests but all the faithful to greater fidelity to Christ.

The Church certainly needs renewal. As the world changes and the Church faces new challenges, she must remain faithful to the faith and mission given her directly by Christ. The laity and clergy must work together in this mission, although our priests bear the special grace of representing Christ sacramentally. As we seek renewal, Pope Benedict and Cardinal Sarah give us a strong defense of the importance of celibacy and its enduring relevance for the life of the Church.