His Church. Our Experience.
Subscribe
HomeLocalPriest thankful for second chance at vocation
Local 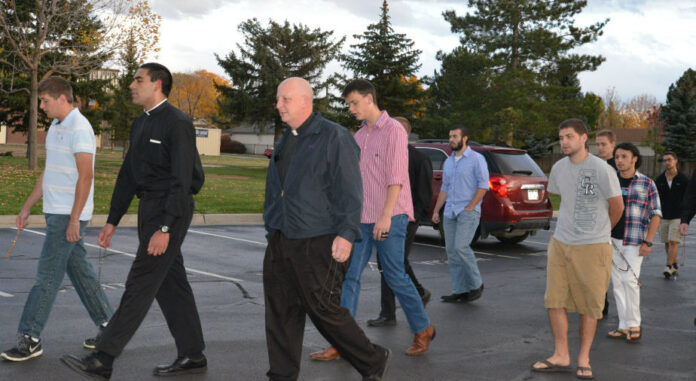 The U.S. Conference of Catholic Bishops is holding National Vocation Awareness Week Nov. 2-8 to raise awareness and encourage prayers for vocations to the priesthood and consecrated life.

“Looking back I realize it came very close to passing me by,” he said.

In reflecting on his own calling to the priesthood and journey to becoming the director of the spirituality year for St. John Vianney Theological Seminary, Father Thermos, 52, shared how God gave him a second chance.

When he was a young boy in Illinois, Father Thermos said he aspired to the priesthood.

“I used to take little missalettes from church and have Mass with stuffed animals,” he said. “I went through young life anticipating and wanting to be a priest.”

His family moved to Lakewood when he was 10 years old and they became regulars at St. Jude Parish. A visit to Mother Cabrini Shrine in Golden introduced him to a devotion to the Sacred Heart of Jesus.

“I became really close to the Sacred Heart of Jesus and really felt a call to be his priest,” he said.

He explored this calling by visiting the Priests of the Sacred Heart and Divine Word Missionaries (or the Society of the Divine Word). After graduating high school, Father Thermos entered the SVD’s seminary college in Epworth, Iowa.

He was sent to the Caribbean Islands to do mission work, but became unsure of his vocation. He left seminary and attended the University of Colorado at Denver to earn a degree in real estate and finance.

“I worked for a little while and decided to do mission work. I went to Houston to work for children with AIDs,” he said. “I came back from there and I worked for nearly 10 years doing social services for children.”

While a volunteer at a soup kitchen, Father Thermos said another volunteer urged him to read two pages of the Catechism of the Catholic Church daily.

“I read two pages a day but very quickly was reading five to 10 pages a day because I found life there,” he shared.

He became inspired after reading about the Trinity. He read sections on the sacraments and the priesthood—it was what he had envisioned as a child.

“I rediscovered my vocation,” he said.

He got in touch with St. John Vianney’s then-vocations director, Msgr. Michael Glenn, who invited him to a “come and see weekend” at the seminary.

“I met with him and he told me about the spirituality year that was starting. It sounded like something I very much wanted to do,” Father Thermos said.

The spirituality year promised a time for seminarians to deepen their faith and commit to a life of prayer. And they got to read the catechism.

“I remember saying during the year, ‘This is a nice year, Lord. I could do this year again’ because I really enjoyed it.”

He continued in the seminary and was ordained May 13, 2006 at the Cathedral Basilica of the Immaculate Conception.

After his first assignments at the Cathedral Basilica and Mother of God parishes, he was asked to return to the seminary. He spent three years as a “house father” for seminarians and is in his fifth year of directing the spirituality year for first-year seminarians.

It’s a year he enjoys leading over and over again. The priesthood, he said, is “everything to me.”

“Being able to pray the Mass and hear confessions is a privilege and joy like no other,” he said. “What I’m most grateful for is I feel like I’ve had a second chance.”

He added, “It’s just very fulfilling because I’m allowed to be close to people and be in communion with people on the most important part of life, which is our life with God.”

Annual Seminary Appeal
Seminarians will visit parishes across the archdiocese starting Nov. 1-2 to appeal for donations to the seminary appeal, which support the operating funds of the two seminaries. The appeal is crucial to forming seminarians and ensuring there are priests in the Church to provide the sacraments for future generations.

Donate: By cash, check or credit card through a brochure or online
Visit: http://sjvdenver.edu/support-sjv-today/annual-parish-appeal/
Questions: Call 303-282-3441