Pride, envy, and sloth: The enemies of charity 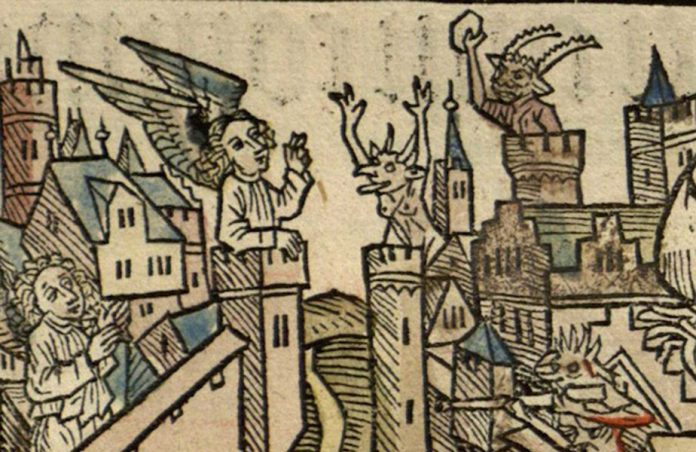 We long to go to the city of God, heaven, and we can already live in its antechamber by living in charity, which, according to St. Thomas, is friendship between God and man. More concretely, charity is a created reality, a supernatural habit infused by God on the soul and, even more specifically, a theological virtue infused by God on the will by which we love God for his own sake above all things and ourselves and neighbor out of love for God.2

The earthly city, opposed to the city of God, is the city we do not want to live in, because it is reigned by a tyrant king called self-love. Such an evil king has seven perverse and monstrous daughters who make our lives miserable. In order of wickedness and hideousness, these wretches are arranged as follows: pride, envy, anger, sloth, greed, gluttony, and lust.3

The ones that fight directly against charity, which is our friendship with God, are the hideous eldest daughter pride, followed by its two perverse sisters, envy and sloth. We must denounce them and their tyranny, because when we give room to sin in our lives, it blackens our souls in such a way that, as St. Theresa describes it, “no night can be so dark, no gloom nor blackness can compare to its obscurity.”4

St. Augustine describes the sin of pride as curvatus in se, literally “curved into oneself,” as an ingrown toenail bends inwards and causes an infection. Pride is the example par excellence of being “bent inward,” because it is nothing more than being constantly preoccupied with oneself, seeing oneself as the center of the world, thinking only of oneself and one’s own wellbeing. He who thinks only of himself can love no one.

The antidote to pride is humility, a fundamental virtue in the spiritual life. Without humility there can be no authentic spiritual life. St. Thomas describes it as the virtue that moderates the pursuit of one’s own excellence. Even more vividly, St. Theresa describes it as “walking in truth.”5  There is also yet another fundamental aspect that complements humility: God is our Father, and we are his children. This is the core intuition on which St. Theresa bases her life and doctrine of spiritual childhood: if God is Father, and we are his children, then we must abandon ourselves completely and live in the joy of his love.

Humility enables us to remain at peace in the experience of being infinitely loved by our heavenly Father, as we constantly acknowledge our sins and trust that we will be forgiven by his infinite mercy.

The second evil daughter that destroys friendship with God is envy. The novelist Gore Vidal gives sinister voice to envy when he says: “Every time a friend succeeds, something dies inside me.”6  This perverse envy is present even in the family of Adam and Eve, where the first murderer in history was the man full of envy against his brother chosen by God: Cain and the fratricide of Abel.

How can we banish envy from us? Through the virtue of gratitude, by calmly observing the many gifts and talents that God has given us and thanking him for each one, knowing that he has given them to us not because we deserve them, but simply because he loves us. We must engrave this revealed truth in our hearts: “What have you that you did not receive? If then you have received it, why do you boast as if it were not a gift?” (1 Cor 4:7).

It is also necessary to notice the gifts and talents of others and to thank God for them, because in true love, the gifts of others make us happy, since in some way they are ours, as we are in communion with God and with others. As our gratitude grows, so will our joy in seeing the talents of others.

The other evil daughter that separates us from charity is sloth, which is not primarily the laziness of a useless person who does nothing, but fundamentally the paralyzing sadness in the face of true good. Dorothy Sayers describes it as the “whole poisoning of the will which, beginning with indifference and attitude of ‘I couldn’t care less,’ extends to the deliberate refusal of joy and culminates in morbid introspection and despair.”7

How can we combat sloth? Through the virtue of diligence, which belongs to charity. In Latin, diligere means to love and care. Particularly, it means the attentive care of one’s actions, seeking the true good, both of oneself and of others. An effective way of growing in diligence is to practice concrete and simple ways of procuring the good of our neighbor, as well as generously fulfilling our obligations to God. As the sacred author says: “Show the same diligence in realizing the full assurance of hope until the end” (Heb 6:11).

St. Catherine of Siena tells us that “all the way to heaven is already part of heaven.” If we live in charity, we are already entering the city of God by enjoying his friendship. Let us have the courage to overthrow the tyrant of self-love and banish from our hearts his evil daughters, the deadly sins!

To coincide with the archdiocesan Advent preaching series, this article is part of a series about The Eucharist as the Sacrament of Charity.