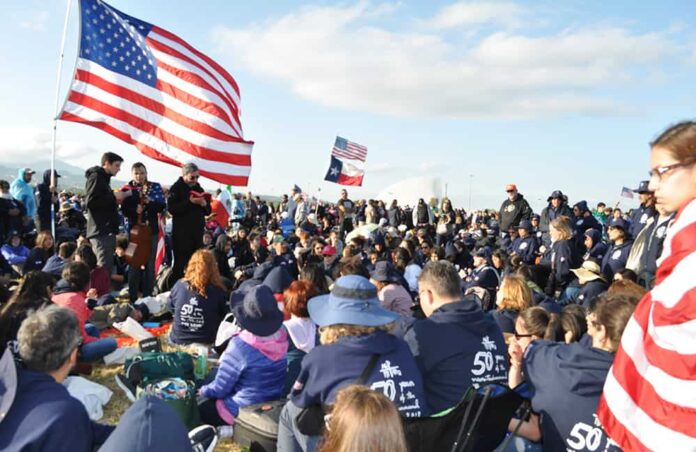 On May 5, at the grounds of Tor Vergata University, Pope Francis met with 150,000 members of the Neocatechumenal Way from across the globe to mark the 50th anniversary of the charism in Rome. Among the 7,700 American pilgrims were nearly 300 Way members from the Archdiocese of Denver.

“The occasion is to give thanks to the Lord for helping us to rediscover our baptism through this Christian initiation,” Father Giuseppe Fedele, responsible for the Way in Colorado, told the Denver Catholic as the group waited for the Holy Father’s arrival. “It’s an opportunity for us to sing the Te Deum [hymn of praise to God] for this anniversary. The Lord is helping us to rediscover the beauty of living our faith in the context of community.”

The Way is a parish-based faith formation process centered on Scripture, Eucharist and community. The catechumenate strives to bring Catholics to mature Christian faith. It was founded in 1964 in Madrid by Spanish artist Kiko Arguello, a layman, and arrived to Rome in 1968.

Missionary in spirit and found on every continent, the Way has 1 million members and has helped to open some 125 seminaries, all called Redemptoris Mater, including one in Denver.

At the meeting, Arguello, 79, led songs and drew applause and flag-waving from the multitude as he introduced the faithful from 135 nations, and the cardinals and bishops seated on the stage who accompanied them, to the pontiff.

In addition to addressing the crowd, Pope Francis sent out 34 new missio ad gentes groups (mission to the nations), comprised of a priest and up to five families, to different parts of the world to evangelize as an “itinerant Church.” He also sent 25 veteran communities of Rome on mission to parishes in the outskirts of the city.

“Go. The mission demands that we leave,” Pope Francis exhorted. “[Jesus] says to his disciples, to all his disciples one word only: Go! Go: a powerful call that resonates in every corner of Christian life; a clear invitation always to be outbound, pilgrims in the world in search for the brother who still does not know the joy of God’s love.”

On the day of the pope’s meeting, on Twitter, Denver Archbishop Samuel J. Aquila affirmed the Holy Father’s words and expressed his own gratitude.

“Pope Francis gives thanks for the 50 years of the Neocatechumenal Way and calls them to evangelize — to go out into all the world!” he tweeted. “Blessings on the Way and all of their missionary activity! They are a blessing for ArchDen!”

The Colorado contingent of pilgrims included some 20 Way members from Pueblo, Wyoming and Utah. The pilgrimage included sites in Madrid and Rome important to the history of the Way and of the Church, including the family home of Arguello; the tomb of Way co-founder Carmen Hernandez, a Spanish lay catechist who died in 2016; the first Redemptoris Mater Seminary; the Shrine of Our Lady of the Rosary in Pompeii, patroness of the Way; the Colosseum and Circus Maximus where early Christians were martyred; St. Paul Outside the Walls Basilica, and St. Peter’s Basilica in Vatican City.

The pilgrims went singing through the streets of the cities they visited spreading Christian joy, and gave missions in prominent squares that included sharing testimonies of sin and brokenness and finding new life in Christ.

Grecia Sanchez, 28, of a Way community at Queen of Peace Church in Aurora, Colo., was among those who shared her testimony.

Way members of St. Joan of Arc Parish in Arvada, Colo., Eric Hilz, 47, and his wife Christy, 43, took their four children, ranging in age from 3 years to 7 years, on the pilgrimage.

“Because of the Way, I’ve been blessed with a community, catechists and priests that have been instrumental in supporting me as a husband and father,” Eric Hilz said. “With all this, I needed to celebrate this 50th anniversary celebration of this charism that has been so instrumental in my life.”

Christy Hilz said she, too, went to give thanks and to receive the graces of catechesis she knew would be forthcoming to deepen her relationship with Christ.

“The pilgrimage confirmed for me that God knows me deeply and that he hears me,” she said. “Each day, God blessed me with something special that showed me he was present.

“This pilgrimage brought to light the gift of the family and of the youth and how they are both essential to the evangelization of the world.”

In his closing remarks, Pope Francis urged the Way to continue its mission of formation and evangelization.

“Your charism is a great gift from God for the Church of our time,” he said. “I accompany you and encourage you: go ahead!”