Pope Francis on feast of Saints Peter and Paul: ‘Only prayer unlocks chains’ 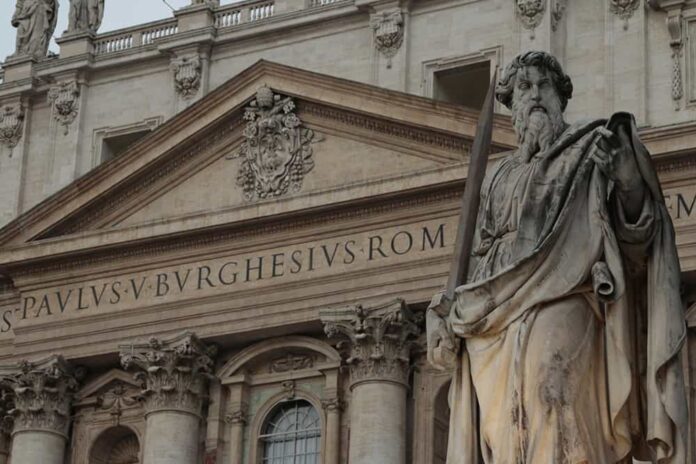 On the Solemnity of Saints Peter and Paul on Monday, Pope Francis urged Christians to pray for one another and for unity, saying “only prayer unlocks chains.”

“What would happen if we prayed more and complained less?” Pope Francis asked in his homily in St. Peter’s Basilica on June 29.

“The same thing that happened to Peter in prison: now as then, so many closed doors would be opened, so many chains that bind would be broken. … Let us ask for the grace to be able to pray for one another,” he said.

Pope Francis said that Peter and Paul were two very different people, yet God gave them the grace to be closely united in Christ.

“We celebrate together two very different individuals: Peter, a fisherman who spent his days amid boats and nets, and Paul, a learned Pharisee who taught in synagogues. When they went forth on mission, Peter spoke to Jews, and Paul to pagans. And when their paths crossed, they could argue heatedly, as Paul is unashamed to admit in one of his letters,” he said.

“The closeness that joined Peter and Paul did not come from natural inclinations, but from the Lord,” the pope said.

The Lord “did not command us to like one another, but to love one another,” he said. “He is the one who unites us, without making us all alike.”

St. Paul urged Christians to pray for everyone, Pope Francis said, “especially those who govern.” The pope underlined that this is “a task that the Lord has entrusted to us.”

“Are we carrying it out? Or do we simply talk … and do nothing?” he asked.

Pointing to the account of St. Peter’s imprisonment in the Acts of the Apostles, Pope Francis said that the early Church responded to persecution by joining in prayer. Chapter 12 of the Book of Acts describes Peter as imprisoned “by double chains” when an angel appeared to him to facilitate his escape.

“The text says that, ‘while Peter was kept in prison, the Church prayed fervently to God for him,’” Pope Francis said. “Unity is the fruit of prayer, for prayer allows the Holy Spirit to intervene, opening our hearts to hope, shortening distances and holding us together at times of difficulty.”

The pope said that none of the early Christians described in Acts “complained about Herod’s evil and his persecution” as they faced martyrdom.

“It is pointless, even tedious, for Christians to waste their time complaining about the world, about society, about everything that is not right. Complaints change nothing,” he said. “Those Christians did not cast blame; they prayed.”

“Only prayer unlocks chains, only prayer paves the way to unity,” the pope said.

Pope Francis said that both St. Peter and St. Paul were prophets who looked to the future.

He said: “Peter is the first to proclaim that Jesus is ‘the Christ, the Son of the living God’. Paul, who considers his impending death, said, ‘From now on there is laid up for me the crown of righteousness, which the Lord will award to me.”

“Peter and Paul preached Jesus, as men in love with God,” he said. “At his crucifixion, Peter did not think about himself but about his Lord, and, considering himself unworthy of dying like Jesus, asked to be crucified upside down. Before his beheading, Paul thought only of offering his life; he wrote that he wanted to be ‘poured out like a libation.’”

Pope Francis offered Mass at the Altar of the Chair, which is located behind the main altar that is built upon St. Peter’s tomb. The pope also prayed before the basilica’s bronze statue of St. Peter, which was adorned for the feast with a papal tiara and a red cope.

During this Mass, the pope blessed the “pallium,” the white woolen vestments to be given to each new metropolitan archbishop. These were made with wool woven by the Benedictine Sisters of St. Cecilia in Trastevere, and are adorned with six black silk crosses.

“Today we bless the pallia to be bestowed on the dean of the College of Cardinals and the metropolitan archbishops named in the last year. The pallium is a sign of the unity between the sheep and the Shepherd who, like Jesus, carries the sheep on his shoulders, so as never to be separated from it,” Pope Francis said.

The pope, who himself was also wearing a pallium during the Mass, bestowed a pallium on Cardinal Giovanni Battista Re, who was elected as the dean of the College of Cardinals in January.

The recently appointed metropolitan archbishops will receive their blessed pallia from their local apostolic nuncio.

After the Mass, Pope Francis prayed the Angelus from the window of the Vatican’s Apostolic Palace with a small crowd spread throughout St. Peter’s Square for the feast.

“It is a gift to find ourselves praying here, near the place where Peter died a martyr and is buried,” the pope said.

“Visiting the tombs of the Apostles will strengthen your faith and testimony.”

Pope Francis said that only in giving can one become great, and said that God desires to help each Christian grow in their capacity to give life.

“The most important thing in life is to make life a gift,” he said, saying this is true for parents as well as consecrated.

“Let us look to Saint Peter: he did not become a hero because he was freed from prison, but because he gave his life here. His gift transformed a place of execution into the beautiful place of hope in which we find ourselves,” he said.

“Today, before the Apostles, we can ask ourselves: ‘And I, how do I arrange my life? Do I think only of the needs of the moment or do I believe that my real need is Jesus, who makes me a gift? And how do I build life, on my capacities or on the living God?,’” he said. “May Our Lady, who entrusted everything to God, help us to put Him at the foundation of every day.”