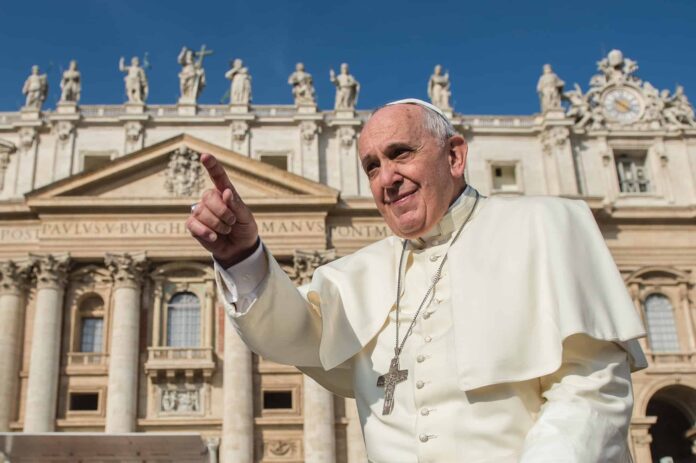 So the Pope has a friend — a rather colorful friend — with whom he likes to chat periodically.  This friend, unfortunately, is also a journalist.  A 94-year-old journalist who prides himself on never recording conversations or taking notes, and instead “reconstructs” conversations after the fact.  Which all may have been well and good when he was in his 40’s.  But half a century later, it’s probably time for him to hang up this particular parlor trick.

Lest he get someone in trouble.

I don’t know what the Holy Father actually said in his most recent conversation with Eugenio Scalfari.  But Scalfari’s reconstruction has the Supreme Roman Pontiff strongly implying that hell does not in fact exist — that the souls of the damned simply cease to exist at the moment of death.

This, as one might imagine, is causing quite a few headaches at the Vatican. I have no idea what the Holy Father said in this particular conversation, and I have no interest in trying to figure it out.  I would much rather stick with what I know, based on multiple on-the-record, actual, verifiable, don’t-need-to-be-walked-back-by-the-Vatican statements that Pope Francis has made over the years.

And that is this:  The Holy Father does indeed believe what the Church teaches about death, judgment, heaven and hell.  What’s more, he has made some pretty profound statements on the subject.

I was particularly struck by his answer, a few years ago, to a young woman who asked him how Hell could exist if God forgives everyone.  He acknowledged it was a good question, told her about the fall of Satan, and then said, “He wanted God’s place.  And God wanted to forgive him, but he said, ‘I don’t need your forgiveness. I am good enough!'”

He went on to say “This is hell.  It is telling God, ‘You take care of yourself because I’ll take care of myself.’ They don’t send you to hell, you go there because you choose to be there. Hell is wanting to be distant from God because I do not want God’s love. This is hell.”

This is the Church’s teaching, beautifully stated.  The Catechism of the Catholic Church says that hell is the “state of definitive self-exclusion from communion with God and the blessed.” (CCC 1033)

God created us for Himself.  But we need to freely choose him, or our union with him would be meaningless — a form of captivity.  If we are free, our options must be meaningful, not just illusions.  And in this life, we can choose to follow him or not.

Hell is quite simply the consequence of choosing “not God” in this life.  It’s not a “place” we can locate on a map, any more than Heaven is.  It is a state of being. I have no idea what it is like, except that it is utterly separated from God.  God is the source of all good.  God is compassion.  God is love. God is beauty. That lack of beauty, love and compassion and every other good, is Hell.

It couldn’t be pleasant.

God doesn’t “send” us to Hell.  We choose it, by the way we live our lives.  I don’t know what that final scene looks like, but I have often heard speculation that, to the condemned soul, the possibility of spending eternity beholding the face of the God they rejected is so painful that they themselves, in that moment, choose exclusion from His presence. God didn’t choose it for them.  They did.

I find that oddly comforting.

I have sometimes been amused to find that some of the same people who condemn the “everybody gets a trophy” mentality in youth sports, also subscribe to an “everybody goes to Heaven” theology of the afterlife.  Do we really believe that God is the “everybody gets a trophy”-guy?  That he put us here on this earth with no goal beyond doing whatever we like for the better part of a century or so?  And that, at the end, it makes no difference how we have behaved, or whether we lived his love or not?    That our “reward” is actually meaningless?  That all — good and evil and in-between — are equally rewarded for how we used our time here?

I don’t believe that.  I believe he placed us here with a goal, and that goal is him.  And we either make it or we don’t.

Fortunately, I have it on pretty good authority that Pope Francis believes the same thing.