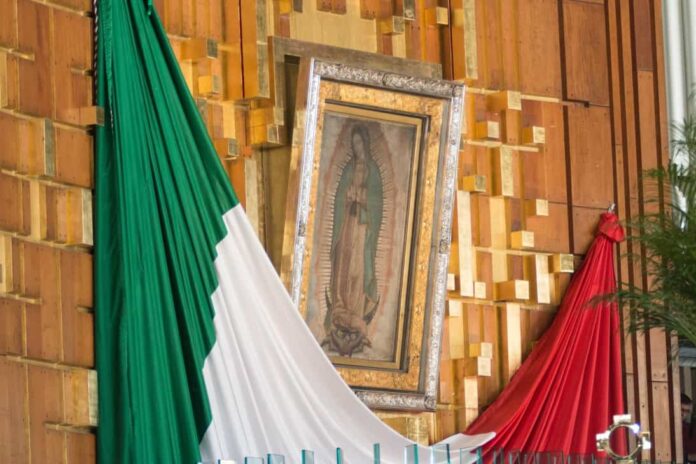 Pope Francis has granted a plenary indulgence to Catholics celebrating the Feast of Our Lady of Guadalupe at home this Saturday.

“The situation of the pandemic forced us, for the sake of everyone’s life, to keep the Guadalupe complex closed from Dec. 10 to Dec. 13, and therefore the celebrations of Our Mother, instead of coming here to her house, she wants to go to your house,” he said.

The Primate of Mexico offered further details in a letter dated Dec. 7.

He explained that in order to receive the indulgence — which the Catechism of the Catholic Church defines as “a remission before God of the temporal punishment due to sins whose guilt has already been forgiven” — Catholics must fulfill certain conditions.

First, they must prepare a home altar or other place of prayer in honor of Our Lady of Guadalupe.

Second, they must view a livestreamed or televised Mass from the Basilica of Our Lady of Guadalupe in Mexico City on Dec. 12 “with devotion and with exclusive attention to the Eucharist.”

Third, they must meet the three usual conditions for receiving a plenary indulgence — sacramental confession, the reception of Holy Communion, and prayer for the pope’s intentions — once it is possible to do so.

Plenary indulgences remit all temporal punishment due to sin and must be accompanied by full detachment from sin.

The cardinal emphasized that the indulgence was available to Catholics the world over.

“Aware of the fact that the devotion to the Virgen Morena goes beyond our borders, the Holy Father thought it appropriate to offer this indulgence to all the Catholic faithful of the world to join in our celebration by adhering to the requirements of the indulgence,” he wrote.

According to Vatican News, the cardinal’s letter was accompanied by a formal proclamation by Cardinal Mauro Piacenza, head of the Apostolic Penitentiary, the dicastery of the Roman Curia that oversees indulgences.

Up 15 million pilgrims normally visit the Basilica of Our Lady of Guadalupe during the first two weeks of December. But Church authorities decided to cancel this year’s pilgrimage because of the pandemic.

More than 1.2 million people have tested positive for the coronavirus in Mexico and 111,655 have died, according to the Johns Hopkins Coronavirus Resource Center.

Pope Francis is expected to mark the Feast of Our Lady of Guadalupe Dec. 12 by celebrating Mass in St. Peter’s Basilica.

The feast day commemorates the apparition of Our Lady of Guadalupe to Juan Diego, an Aztec convert to Catholicism, in 1531. The apparition and its miraculous Marian image led to mass conversions of native American communities to Catholicism.

Devotion to Our Lady of Guadalupe has continued for native communities, Mexicans, and across the Americas and the world.

Concluding his letter, Aguiar said: “Let us allow Our Lady to visit us in our homes this year. Let us open our doors to her and lift up our hearts so that she may bless us and cover us with her mantle.”

“May Our Lord Jesus Christ and His Most Holy Mother, St. Mary of Guadalupe, continue to accompany us and bless us on this painful journey for all the people of God who wander in our archdiocese and throughout the world.”

Share
Facebook
Twitter
Linkedin
Pinterest
Email
Print
Previous articleNo mall? No problem! Virtual Santa visits bring the jolliness to your home
Next articleWhat the Year of St. Joseph means, and how to gain the indulgences