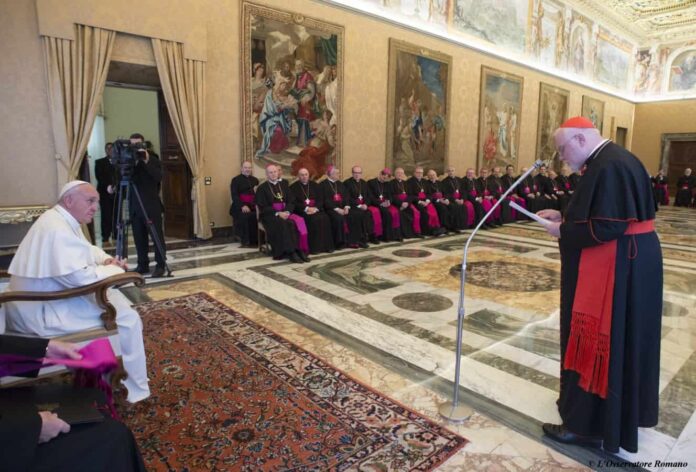 As he was approaching his death, Jesus prayed that the Church would be one, that it would be unified. Looking back in history and at the present times of tumult within society and the Church, it is vitally important that we remember our unity comes from remaining in relationship with the Father, Jesus and Holy Spirit, not from adopting the values of the world.

Speaking to God the Father, Jesus said in John 17, “I ask not only on behalf of these, but also on behalf of those who will believe in me through their word, that they may all be one.” We are those who believe in Jesus through the word of the Apostles, as generations of Christians born before us have. The unity of the Church is not just for our own sake, it’s also for the world, so that it will believe that the Father sent Jesus.

Those who read Catholic-related news know that Pope Francis recently spoke about the danger of schism within the Church. He told a reporter that he prays that a schism doesn’t happen, but he also acknowledged that one is possible. “It’s a choice that the Lord leaves to human freedom,” the Pope said, adding, “I pray for them not to happen, as the spiritual health of many people is at stake.” Human freedom has been the cause of schisms throughout the history of the Church, and before the Church, among the people of Israel. Yet, as we know from Christ’s words, it is essential for believers to remain united.

Unfortunately, recent developments in the Church in Germany, led by Cardinal Marx and most of the German bishops, risk damaging the unity of the Church universal. These bishops and a sizeable group of lay people plan to hold a synod that takes binding votes on whether to change doctrinal matters like the ordination of women, blessings of same-sex unions and sexuality-related topics. In his June letter to the German Catholics, Pope Francis warned, “Every time an ecclesial community tried to resolve its problems alone, trusting and focusing exclusively on its forces or its methods, its intelligence, its will or prestige, it ended up increasing and perpetuating the evils it tried to solve.” This is because in schisms there is a failure to listen to the voice of God and the authentic voice of the Holy Spirit, who always keep our eyes fixed on Jesus Christ.

It is disappointing that the German bishops have pledged in recent days to forge ahead with their plans, despite the intervention of Pope Francis and a letter from Cardinal Marc Ouellet that called their proposal “not ecclesiologically valid.”

The antidote to this potential wound to the Body of Christ is seeking union with the three Persons of the Holy Trinity, who are the source of the Church’s unity. Those who remain in love with each person of the Trinity, do not seek out their own path. For this reason, the Catechism teaches:

One only need look at the history of those Protestant communities that are constantly splitting from each other over doctrine to see the impact of replacing the faith with societally acceptable beliefs.

Jesus teaches us, “I am the vine, you are the branches. Whoever remains in me and I in him will bear much fruit, because without me you can do nothing. Anyone who does not remain in me will be thrown out like a branch and wither…” (Jn 15: 5-6). One can easily observe in history that changing teaching to remain in step with the modern morality does not fill churches. Only encountering Jesus Christ, remaining faithful to him no matter what the cost, and staying attached to the vine bears fruit and fills churches.

A perfect demonstration of how love for the Holy Trinity yields unity comes from the life of St. Maximilian Kolbe. When he experienced the cold, love-shattering existence of Auschwitz concentration camp, the Nazi creed held that Jews, some Protestants and the Church must be dismantled to make way for the values of the Reich. But instead of withering in these conditions, St. Maximilian was a conduit of love, a branch who stayed connected to the vine of Jesus. He was on fire with love for Christ and his Church, which he often reminded others “has nothing to do with sweet tears and sentiments but is a matter of a free will which holds fast to love even despite our aversion and hesitancy.”

For the Church to remain united, we must all strive to love and remain connected to Jesus Christ and his teachings and not those of the world. We must put our faith in Jesus Christ and be confident that he is faithful to his promises. Look at how often in the Gospels Jesus compliments the faith of the person he has healed. Contrast this with when the apostles showed little faith as they were tossed about in their boat by a raging storm. Jesus did not urge them to have less faith but rather to stop cowering in fear and cease worrying. A strong faith, confident in Jesus and his power and authority, brings about the strength to live the Gospel. It is truly the work of God, as Jesus reminds us, “For human beings this is impossible, but for God all things are possible” (Mt 19:26).