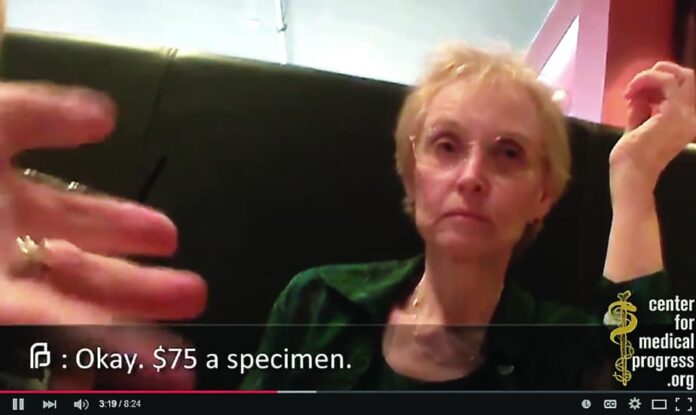 An undercover video released July 21 allegedly shows a senior official at Planned Parenthood flippantly discussing monetary compensation for aborted baby organs, and the alteration of abortion procedures to ensure that the organs are intact.

“It’s been years since I talked about compensation, so let me just figure out what others [Planned Parenthood affiliates] are getting. If this [price] is in the ballpark, it’s fine, if it’s still low then we can bump it up,” Dr. Mary Gatter appears to tell actors posing as representatives of a fetal tissue procurement company, before joking, “I want a Lamborghini.”

The eight-minute video was released by the citizen journalist group Center for Medical Progress, which reports on medical ethics. It is the second video released as part of their report, “Human Capital,” the result of a three-year investigative study of Planned Parenthood and its transfer of body parts of aborted babies for money.

The first undercover video was made public July 14, showing the organization’s senior director of medical services discussing the “donation” of body parts of aborted babies for “reasonable” compensation. The Planned Parenthood official estimated the price for the body parts from $30 to $100 per “specimen.”

Planned Parenthood has defended the practice, saying that it is not making significant or illegal profits from the process, and that it receives appropriate consent from mothers.

The new video purports to show Gatter saying that “we’re not in it for the money, and we don’t want to be in a position of being accused of selling tissue, and stuff like that. On the other hand, there are costs associated with the use of our space, and that kind of stuff … it has to be big enough that it is worthwhile.”

Gatter appears to suggest “$75 a specimen,” as a price that would “work” for fetal tissue of aborted babies.

Federal law generally prohibits the selling of human tissue but allows for the donation of tissue with “reasonable payments” for the “transportation, implantation, processing, preservation, quality control, or storage of human fetal tissue.” It explicitly prohibits the sale of tissue for “valuable consideration.”

The video also includes a discussion of possibly adjusting the abortion procedure of certain babies to better deliver an “intact specimen” to the organ harvesters.

“(I)f our usual technique is suction, at 10 to 12 weeks, and we switch to using an IPAS or something with less suction, and increase the odds that it will come out as an intact specimen, then we’re kind of violating the protocol that says to the patient, ‘We’re not doing anything different in our care of you,’” Gatter appears to say.

“Now to me, that’s kind of a specious little argument,” she appears to continue, saying that she “wouldn’t object” to asking the abortion doctor “to use an IPAS at that gestational age, in order to increase the odds that he’s going to get an intact specimen, but I do need to throw it out there as a concern. Because the patient is signing something and we’re signing something saying that we’re not changing anything with the way we’re managing you, just because we agree to give tissue.”

“I think they’re both totally appropriate techniques. There’s no difference in pain involved. I don’t think the patients would care one iota. So yeah, I’m not making a fuss about that.”

At the end of the video, she appears to instruct one of the “buyers” to send her a business proposal. “And then, if we want to pursue this, mutually, I’ll mention this to Ian [the surgeon] and see how he feels in terms of how he feels about using a ‘less crunchy’ technique to get more whole specimens.”

More undercover videos could be released in coming weeks. A lawyer from Planned Parenthood sent a letter to U.S. Rep. Fred Upton, chair of the House Energy and Commerce Committee, which is launching an investigation into the organization after the release of the first video.

“We don’t know what the Center will release next, but we know enough to be deeply concerned about the infiltration of Planned Parenthood and its affiliates,” the letter states.

It said that Planned Parenthood had at least 65 meetings with the Center for Medical Progress, and suggested that future videos could include racial questions and footage of an area used to process the tissue of aborted babies.

This article by Adelaide Mena and Matt Hadro was originally published on CatholicNewsAgency.com.

Members of Congress held a press conference on Capitol Hill July 15 in reaction to the videos released by the Center for Medical Progress, a group of citizen journalists that cover medical ethics.

“Congress is right to use its oversight,” said U.S. Rep. Martha Roby, R-Ala., with tears in her eyes, “to get to the bottom of this and hold this organization accountable.”

In the first video, actors presented themselves as members of a “fetal tissue procurement company” and asked Planned Parenthood’s senior director of medical services, Dr. Deborah Nucatola, how they could work with Planned Parenthood clinics to obtain body parts of aborted babies for research.

U.S. Rep. Tim Murphy, R-Pa., who chairs the Oversight and Investigations subcommittee of the House Energy and Commerce Committee, announced an investigation into Planned Parenthood over the report. He was joined at the press conference by other pro-life members of Congress, both Republican and Democrat.

While the sale of human body parts is generally illegal, federal law does permit donation of fetal tissue for research purposes with the consent of the mother.

State laws governing the donation of organ tissue, however, vary by state.

Planned Parenthood has defended the practice, saying that it is not making significant or illegal profits from the process.
Source: CatholicNewsAgency.org