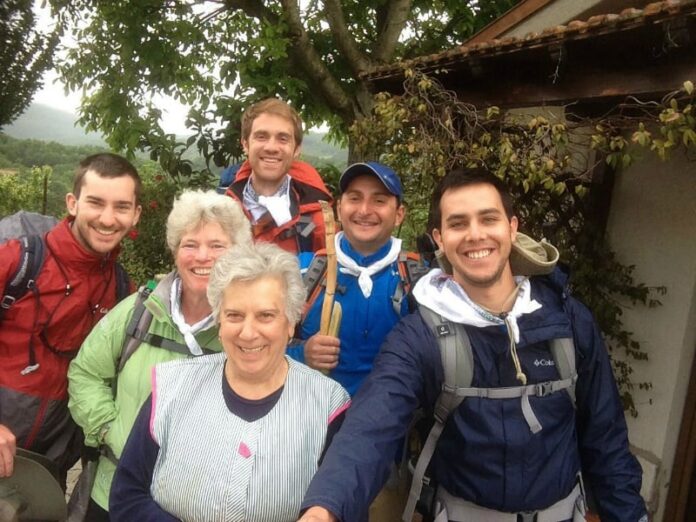 Mendicant pilgrim Ann Sieben is leading four men across Europe on foot for World Youth Day. Every week, we are updating you on their progress via their pictures and journal entries, which they are sending us throughout their journey. You can read the introductory post here.

25 May
Piedi Luco
“A pilgrim never goes back”

Walking out of Rome–motivated, a little scared–Rome wasn’t the destination now. We would not return on this trip. Kraków pulls us forward.

A pilgrim never goes back.

Both humble and remarkable, our send-off pilgrim Mass in the Chapel of Our Lady of Czestochowa, opposite the bones of St. Peter himself in his basilica, set our pilgrimage in motion.

It was to be a day of crypts. Spontaneously, we visited the tomb of St. Agnes in the crypt beneath a 5th-century church, built on the catacombs of the earliest of the Christian presence in Rome.

Equally unanticipated, we spent the night in the crypt of the Papal Basilica of Santa Maria Maddelena in Montorotondo. “Cold as a crypt” is a useful quote.

The city became the countryside, the royal became a trail–Sabina, Umbria–the walk has progressed. We’ve not always eaten particularly well, or slept well, or been fully embraced, but we have received what we needed when we needed it: A lesson of trust in God’s providence.

And this is only day five. People are good, in fact goodness overflows.

We ascended into ancient hilltop villages–the figs not yet ripe, but the cherries bursting–and found our way to the ancient Benedictine abbey of Farfa–where pilgrims are well-received.

Our journey progressed but we stepped back in time to a fortress town, still with a breath of life, Montenero, stoic and silent.

The sun was setting and we reached San Sebastiano–unnanounced–yet we knocked, the door was opened, the town embraced us fully. A stone lean-to on the wall of a 12th century church was our home for the night, a corner fireplace warmed us, pizza, wine, fruit tart came to us by the populous and priests. We were fed equally by an Italian nonna, who stood on watch as we ate breakfast in her kitchen, all the food hand-prepared.

Through the forests into Franciscan paths, we went where he went, sat here he sat, we walked where he walked.

“I understand now, standing in his cave, what St. Francis did, what he meant, when I walk in his footsteps,” said Ricardo when he emerged from the cave where “Laudato Si” was written.*

The discipline of the pilgrim routine pulls on our patience, the habits are not yet fully formed, yet the insistence of our pace moves us ever forward.

*The song written by St. Francis, not Pope Francis’ encyclical.

A homiletic phrase shared last week in reference to us during Mass, has now come to life. Long distances over consecutive days, complicated by afternoon thunderstorms, have all been “worth the effort.”

Our trail varies greatly. Some days we’re on bike paths, other times on back roads. Our extremes range from bush-whacking to walking along the highway. Some days we walk separately and alone, others in pairs or as a group.

We have experienced a range of accommodations and have learned that having a bed, hot water, and kitchen access is the ideal pilgrim situation.

No two days are the same.

We are continuing to form our pilgrim habits and are settling into the routine, allowing us more freedom to speak with those we encounter along the way, accept their hospitality and participate in their traditions, as we did on the occasion of Corpus Christi: A Eucharistic procession in Terni and a festival of flowers in Spelco.

We’ve encountered more pilgrims this week, particularly concentrated in and around Assisi. From different origins, with different methods and different comfort-levels we have enough in common to recognize each other. “Salve” is the pilgrim greeting. It seems we gain a common inspiration from the saints Assisi has raised. The way this town draws people to itself from all walks of life, not just pilgrims, is a strong testament to the power of Francis’ simple but profound witness–more by action than by words, and those of his followers and companions. St. Francis was a pilgrim!

Indeed, not just in Assisi by throughout our journey so far, we have walked in the footsteps of Heaven’s greatests, both those widely known, such as St. Valentine in Terni, and those lesser known, such as St. Margaret in Cortona, whose eerily in corrupt body lies behind the altar of the Basilica adjoined to the convent where we’re spending this night.

Each saintly encounter reinforces the transcendent meaning of little lesson, “Vale La Pena” as earthly struggles have earned them eternal joy. The pilgrim trusts that it is all worth the effort.