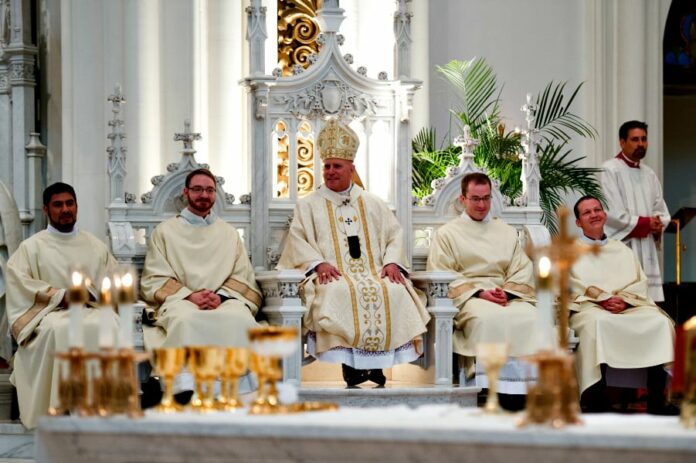 During last week’s deacon ordination, Archbishop Samuel Aquila told ordinands their new ministry must be “rooted in humility” and they should strive to serve with “the heart of Christ the Servant.”

“You will be configured to Christ the Servant,” he said during his homily Feb. 14 at the Mass of holy orders at the Cathedral Basilica of the Immaculate Conception. “Pray for the grace of humility to receive that gift.”  > Story continues below photo album

The four men ordained—Brother James Claver, S.C.J.; Mason Fraley, Salvador Sánchez Gasca and Matthew Magee—are studying for the priesthood at St. John Vianney Theological Seminary. Ordination to the diaconate is a step in their formation to ultimately being ordained to the priesthood.

Drawing on the liturgy’s Gospel (Mt 20: 25-28), Archbishop Aquila reminded the men that they have been called by the Lord to serve, not to be served

“You are saying, ‘I am not choosing what I want, but what God wants because it will bring me the greatest joy and happiness,’” the archbishop said. “Pray for the heart of Christ, you must desire it and cooperate with it. Pray to be like Jesus and make yourself a total self-gift.”

Below are profiles of the men that were ordained.

Deacon James Claver, S.C.J.
Age: 30
Hometown: Austin, Texas
Most inspirational saint: St. Ignatius Loyola
Deacon James Claver once doubted his faith as a child. He was sent to a Protestant middle school where he had a difficult time. But after a freshman-year retreat at a Catholic high school, Claver said, “I met the Lord in a really profound way, and as a result, I started to get really active in my parish and my youth group.” Immediately, a vocation to the priesthood was suggested to Claver, but he was opposed to the idea. Over time, he opened himself to God’s will. “I said, ‘OK, Lord, even my calculus teacher in high school can recognize that I have a vocation, and I don’t quite see this, but I will be open to your will.” He discerned his vocation while studying at Franciscan University of Steubenville and while doing missionary work in Honduras. Deacon Claver is a professed member of the Servants of Christ Jesus community.

Deacon Mason Donald Fraley
Age: 25
Home parish: St. Francis de Sales, Denver
Most inspirational saint: Sts. Josemaria Escriva and Luigi Giussani
Growing up in Denver, Deacon Mason Fraley didn’t really have any interest in the priesthood. “I was really resistant to it, because it struck me as such a radical lifestyle that was scary,” he said. But as his relationship with Christ grew, in part due to his experience attending Bishop Machebeuf High School, he began to appreciate the unique role priests have in sharing Christ with others. “(Because of) the happiness I had in relationship with Christ,” he said, “I wanted an opportunity to spend my whole life sharing him with others. Then I applied to seminary my senior year.” Prior to his ordination, the word foremost of his mind, he said, was “joyful.”

Deacon Salvador Sánchez Gasca
Age: 31
Hometown: León, Guanajuato, Mexico
Most inspirational saint: St. John Bosco
Deacon Salvador Sanchez said he had always thought about being a priest. One of his pastors encouraged him as a child, but he forgot until years later when he was prompted by God. “One day, I received the call again and then I said, ‘Yes.’” He was further inspired when he arrived in the United States. “I saw the necessity of the people, the Spanish-speaking people—they didn’t have a lot of priests who speak Spanish,” he shared. He applied to the seminary and was accepted 10 years ago. In anticipation of his ordination, Deacon Gasca said he was feeling “hopeful.”

Deacon Matthew David Magee
Age: 25
Home parish: Our Lady of Loreto, Foxfield
Most inspirational saint: St. John Paul II
The diaconate will be family affair for the Magees, as Deacon Matt Magee’s father, Michael Magee, is also an ordained deacon, serving at Our Lady of Loreto. “[My dad] started formation when I was in my sophomore year of high school,” he said. “He was ordained my first year of seminary.” Priesthood was always in the back of Deacon Matt Magee’s mind, but he didn’t take it seriously until high school. “My pastor growing up was always really influential, but I always put priesthood in the back,” he said. After discerning the last two years of high school and his first year in college, he felt God call him to enter seminary and “just had this great peace come over me,” he said.