A personal tour of Catholicism 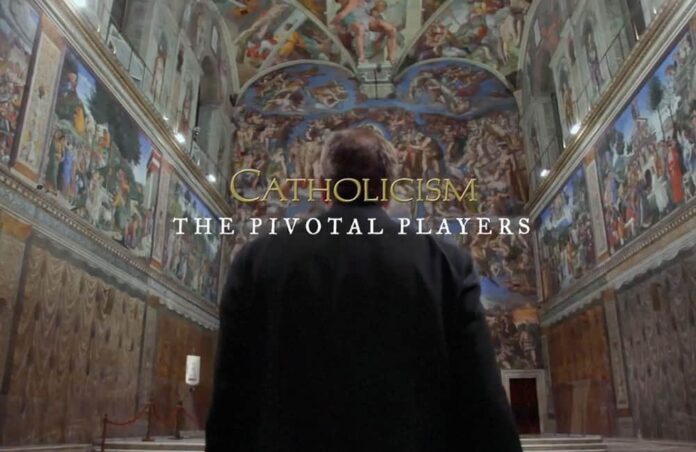 In his monumental video series, Catholicism, Bishop Robert Barron took us on a guided tour of the major themes of the Catholic faith. He did so by visiting the key places that shaped our faith and culture throughout the centuries: The Holy Land, Rome, the great churches of Christendom, and sites frequented by the saints. In the accompanying book, he told us, “Catholicism is a celebration, in words and imagery, of the God who takes infinite delight in bringing human beings to the fullness of life” (5).

In his new series, Catholicism: The Pivotal Players, Barron continues his tour, but with a more personal bent. This personal touch, combined with the artistic style of the first series, fits the vision of Pope Benedict XVI, who emphasized the crucial witness of the saints and beauty:

“I have often affirmed my conviction that the true apology of Christian faith, the most convincing demonstration of its truth against every denial, are the saints, and the beauty that the faith has generated. Today, for faith to grow, we must lead ourselves and the persons we meet to encounter the saints and to enter into contact with the Beautiful.”

The Pivotal Players series enables us to follow the path pointed out by Benedict, entering into the beauty of the faith, both in the art it has inspired and most especially in the lives it has shaped from the inside.

Bishop Barron has chosen six figures for this first series: two laymen, both of whom were artists, a lay woman-mystic, two medieval friars, and a Cardinal convert. He provides an overview of their lives and the major elements of their contribution to the tradition.

Francis would be on just about anyone’s short list of key Catholic figures. Francis embodies Catholic reform not simply for the founding of an institution, but mainly in his imitation of Christ. Barron takes us beyond the common sentimental portrait, leading us into Francis’ radical Christian discipleship.

Thomas stands as one of the great intellectual giants of human history. Bishop Barron emphasizes his sanctity, which undergirds his writing, and even his philosophical thinking. Barron also demonstrates his enduring relevance, especially in overcoming the common flaws in atheistic critiques of our understanding of God.

Newman is the convert, because he moved from an anti-Catholic position to embrace the Church through careful study of the Church Fathers. He ended up taking many other converts with him, especially through the personal account of his conversion in Apologia pro vita sua and his articulation of how doctrine develops through time.

The Mystic: St. Catherine of Siena

Catherine testifies to the power of grace, as God raised up an uneducated young woman to move the fate of the Church and Christendom. God spoke to Catherine in a familiar way, drawing her deeply into the spiritual realm, which she relayed to us in her writing. Her witness exercised such great power that she succeeded in drawing the Pope back to Rome from the Avignon captivity.

Only Chesterton, the master of paradox, could champion both common sense and fairy tales. A convert like Newman, the wildly entertaining Chesterton became one of the great apologist of the twentieth century, writing fiction, essays, biographies of saints, and major works such as Orthodoxy. He perceived the descent of the modern world into insanity and sought to counter it even by proposing a new economic model.

Barron’s presentation of Michelangelo shows forth the beauty of the faith most of all, taking us through his great masterpieces, such as the Pietà and the Sistine Chapel. Michelangelo displays the Catholic imagination and artistic genius at its highest point. He personifies the ability to signify the divine through physical signs—the foundation for the Christian artistic tradition.

Each of these figures captures something essential about the Catholic thing and provide models for living the faith today. They can help us to deepen our own adventure through the sublime tradition of Catholicism.

Jared Staudt
R. Jared Staudt, PhD, is a husband and father of six, the Associate Superintendent for Mission and Formation for the Archdiocese of Denver, a Benedictine oblate, prolific writer, and insatiable reader.
RELATED ARTICLES
Opinion