Paul, Apollos, and Cephas, all over again 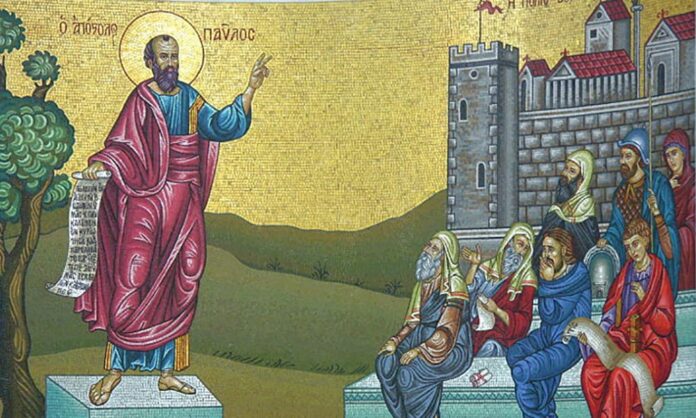 In April 2016, Bishop Philip Egan of Portsmouth, England, issued a pastoral letter on the interpretation of Amoris Laetitia (the Pope’s apostolic exhortation on marriage) and re-affirmed the Church’s long-settled teaching: the divorced and civilly remarried, while members of the Christian community, are not living in full communion with that community, and thus should not present themselves for Holy Communion until their manner of life changes or their irregular marriage has been regularized under Church law. Last month, Archbishop Charles Scicluna and Bishop Mario Grech of Malta also issued a pastoral letter on Amoris Laetitia and invited divorced and civilly remarried couples to present themselves for Holy Communion if they were, in conscience, at peace with God.

It happens that a woman in the Portsmouth diocese has vacation property on Malta. She’s divorced and civilly remarried and seems to understand the Church’s longstanding teaching about what her situation means for the worthy reception of Holy Communion. Shortly after the Malta bishops’ statement, she ran into the local priest on his village rounds and asked, “When it comes to Communion, do I follow Bishop Egan or Archbishop Scicluna?” As the priest in question put it in an e-mail, “What could I say, ‘Egan when you’re here, Scicluna when you’re there…’?”

At the very beginning of the First Letter to the Corinthians, St. Paul lamented that his fractious converts in rowdy Corinth were divided: “For it has been reported to me…that there is quarreling among you, my brethren. What I mean is that each of you says, ‘I belong to Paul,’ or ‘I belong to Apollos,’ or ‘I belong to Cephas’….” These divisions were not simply a matter of who-got-converted-by-whom, Paul insisted. They were misunderstandings fracturing the body of Christ: “Is Christ divided?” [1 Cor. 1.11-13].

Such Corinthian-type divisions once seemed far removed from our contemporary Catholic situation. But as that brief conversation in a Hampshire village suggests, we are living, today, the crisis of division that caused St. Paul such grief.

And as the Church is universal, so is the crisis. Cardinal Wilfred Napier of South Africa is one of Catholicism’s more robust practitioners of the tweet. After the Malta bishops’ directive, Napier tweeted, “If Westerners in irregular situations can receive Communion, are we to tell our polygamists….that they, too, are allowed?” The archbishop of Durban was not being glib or snarky; Cardinal Napier was describing a real pastoral problem in Africa that has now been made worse.

Media stereotypes notwithstanding, Catholicism is not monolithic; there’s ample room for legitimate diversity in the Catholic Church. The Vatican yearbook lists almost two dozen liturgical rites recognized in the Catholic Church. (For extra credit, identify the principle differences between the Malankarese Rite of the Antiochene tradition and the Malabarese Rite of the Syro-Oriental tradition.) That same yearbook catalogues hundreds of men’s religious institutes and even more women’s religious orders. The Church’s governance structures include dioceses and archdioceses, territorial prelatures and territorial abbacies, vicariates and prefectures apostolic, patriarchal exarchates, archiepiscopal exarchates, and one personal prelature. Catholicism is a luxuriantly and colorfully diverse communion, and that rich spiritual and human plurality is one of the Church’s glories, a reflection of the abundance of divine grace poured into the world by the Holy Spirit.

Yet as St. Paul explained to his paleo-Christians in Corinth two millennia ago, legitimate diversity does not and cannot touch on fundamental questions of Christian truth. Whether they claimed spiritual descent from Paul, Cephas, or Apollos, that human connection was subordinate to the truth that they had been baptized into Christ, who is indivisible. And as Christ is one, so must the Church, his mystical body, be.

Writing during Synod-2015, I was but one of many who made what seemed to us an obvious point: it cannot be the case that a grave sin in Poland is a source of grace two kilometers across the border in Germany. None of us then had thought of Portsmouth and Malta, but the same principle applies: Christ is not divisible and neither is his truth. We do not “belong to Egan” nor do we “belong to Scicluna.” We belong to Christ. And authentic pastoral accompaniment must always be along “the way” of the One who is also “the truth and the life” [John 14.6].