His Church. Our Experience.
Subscribe
HomeLocalFaith is making a comeback in politics, pastor says
Local

Faith is making a comeback in politics, pastor says 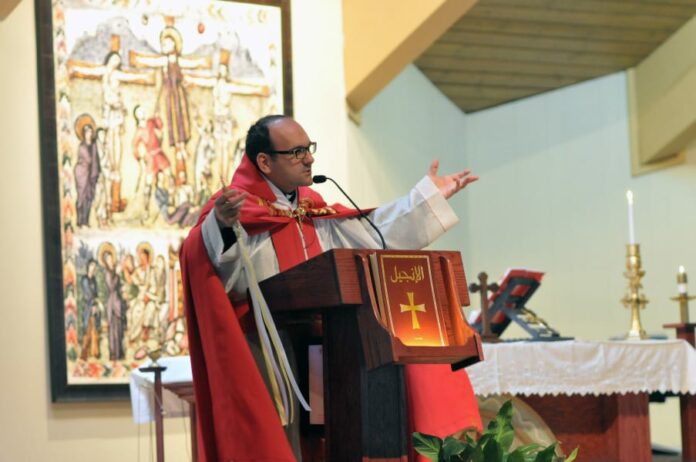 A spirit of faith is making a return to the political scene, according to Father Andre Y-Sebastian Mahanna, pastor of St. Rafka Maronite Catholic Church in Lakewood.

The pastor spoke about “a rebirth of American courage” at a meeting of the Equestrian Order of the Holy Sepulchre of Jerusalem, held earlier this month at St. Thomas More Parish in Centennial.

He used as an example of the three-day In Defense of Christians (IDC) summit held last September in Washington, D.C., which he called “a foundational cornerstone for the new 21st-century world.” The event gathered Orthodox Christians, evangelicals, Roman Catholics and others for prayer, speeches and a lobbying push on Capitol Hill.

“Practicing politics without the Spirit could be deadly,” Father Mahanna noted. “What we have witnessed in the last few decades is that politics were practiced without spirit—the thing that left us today with deadly consequences, for it sows seeds of hatred and reaps death. It goes blind and burns everyone: those who are good and those who are bad.”

“My personal feeling and assessment,” he added, “is that the spirit has returned to politics.”

Father Andre, who also serves as the director of the Office of Ecumenism and Interfaith Relations of the Maronite Eparchy of Our Lady of Lebanon in the United States, said the summit was noteworthy for the 18 politicians who “proclaimed the Bible and assured the Judeo-Christian foundation of our Country of the United States of America.”

“At the same time,” he continued, “they knew how to address, with maturity and in a positive way, the problem of ISIS without attacking Islam, and without hurting the integrity of their vision for peace and the will to live with Jews, Christians and all other ethnic and cultural groups in the area.”

“This is a change in Congress’ diplomacy and speech strategy,” the pastor asserted. “It was a profession of faith first of all in God, then in always assuring the safety and the opportunity of all people, whether religious or not, to exist, to live and to be protected by the government.”

The ecumenical and bipartisan event drew 1,200 people from 24 states and 14 countries and included a meeting of Christian patriarchs with President Barack Obama.

The Equestrian Order of the Holy Sepulchre of Jerusalem is a Vatican-approved lay order of knights and ladies charged with protecting Christianity in the Holy Land.