His Church. Our Experience.
Subscribe
HomeLocalOpening the tomb of Christ
Local

Opening the tomb of Christ 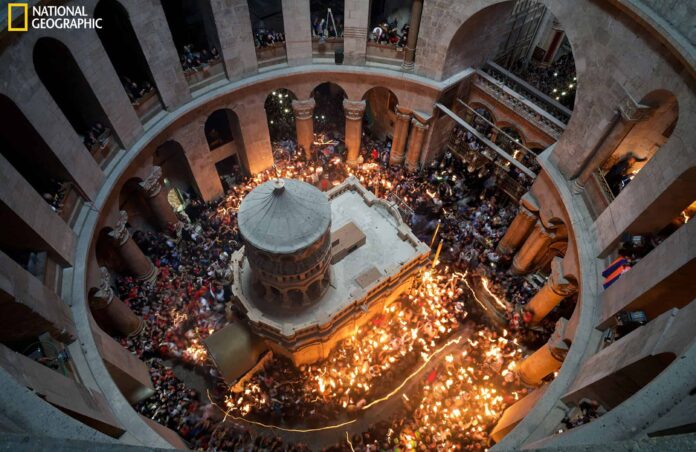 The life, death and resurrection of Jesus Christ came alive for a group of researchers who opened the tomb where millions believe he was buried over 2,000 years ago.

As they looked upon the holy bed — which they later discovered hadn’t seen light in 1,673 years — they were captivated.

“I was overwhelmed by that sense of seeing something so sacred to Christians around the world,” said Dr. Fredrik Hiebert, archaeologist-in-residence for National Geographic.

The tomb, which resides inside the Church of the Holy Sepulchre in Jerusalem, was opened for just 60 hours on the evening of Oct. 26, 2016. National Geographic’s exclusive coverage can be seen here.

According to historical accounts, Emperor Constantine, Rome’s first Christian emperor, sent representatives to Jerusalem to locate Jesus’ tomb around 325 A.D. The site they were directed to and where they built a shrine currently lies within the Church of the Holy Sepulchre.

But the Holy Edicule — the shrine that encloses the tomb — has needed significant renovations for years.

“It was a project that was long overdue,” said Dr. Hiebert.

The Church of the Holy Sepulchre had actually agreed to do the Edicule restoration in 1959, but it took cooperation from each patriarch from the three Christian communities responsible for the tomb (Greek Orthodox Patriarchate of Jerusalem, the Franciscan order of the Catholic Church and the Armenian Patriarchate) to finally make it happen in 2016.

An interdisciplinary team from the National Technical University of Athens (NTUA) was tasked with the restoration, and Dr. Hiebert and a team from National Geographic documented the project.

The restoration was captured on film and publicized in “Secrets of Christ’s Tomb,” an explorer special that premiered on the National Geographic Channel Dec. 3, 2017.

“It really is a project about preserving and conserving one of the world’s greatest historic and sacred sites in the entire world,” said Dr. Hiebert. “And it was literally falling apart.”

Antonia Moropoulou, a professor at NTUA, served as the chief scientific supervisor of the Holy Edicule rehabilitation project.

“It was a great technical, scientific, cultural, political and religious challenge,” she said.

Professor Moropoulou and her team not only convinced the three patriarchs to agree to the renovation of the tomb itself, but they also completed the entire project in just nine months, she said.

The research team hadn’t initially planned on opening the actual tomb until they realized they needed to complete work inside the site to prevent later damage. The patriarchs agreed it needed to be done.

On the evening of Oct. 26, the work began. The doors to the church were locked and team members went inside to lift a slab that covers the holy bed.

I don’t think in my life I will ever encounter something that had such a personal resonance. It’s changed me a lot.”

The patriarchs were the first to go inside.

“It was amazing to see their smiles when they came out,” said Dr. Hiebert.

When it was the National Geographic team’s turn, they were simply overwhelmed.

“As we said in the film, my knees were shaking,” said Dr. Hiebert. “It was an amazing moment.”

It’s one that had a resounding impact on the archaeologist’s life.

“I continue to be an archaeologist in residence at National Geographic and I continue to go on my digs,” said Dr. Hiebert. “But I don’t think in my life I will ever encounter something that had such a personal resonance.

Professor Moropoulou felt a sense of connection when the tomb was opened.

“The message of the Resurrection unites all of humanity,” she said. “People of all religions and all ethnicities all kneel at the tomb of Christ.”

Manolis Alexakis, Maria Apostolopoulou, Dr. Ekaterini Delegou, Dr. Kyriakos Lampropoulos and Elisavet Tsilimantou — members of Professor Moropoulou’s team — explained that although they had seen photos and video footage of the tomb, entering it “overwhelms the senses.”

“The architecture, the chanting, the scents take you back in time,” they said. “When entering the Holy Edicule, you bend to enter the holy tomb chamber and realize that everything is different than what you had imagined, yet familiar through the accounts given in the Gospels.”

The team added that visiting the holy site felt like “a visit through the timeline of history.”

While the tomb was opened, the NTUA team experienced technological problems that seemed to be inexplicable.

“On October 26, 2016, the instruments presented several discontinuities in their signals, something that we have not yet explained,” they said.

But Dr. Hiebert has seen technology malfunctions on a daily basis, so he wasn’t surprised by the glitches and noted that the rest of the project went smoothly.

“The conservators were able to put a moisture barrier in to protect the holy bed, the holy rock,” he said, “so that once it was covered again, it would basically be preserved for the next 2,000 years.”

Those on-site were more surprised by other findings, including the discovery that the original walls of the cave surrounding the tomb were still intact.

Professor Moropoulou explained that her team had actually seen the non-visible internal layers of the structure through the ground penetrating radar prospection they used before they started their work.

“Of course, when the work started and the holy rock (the original walls of the cave) was actually brought to light, we felt overwhelmed that it had survived throughout almost 20 centuries, embedded within the Edicule,” she said.

The most significant discovery of all came after samples of the mortar between the original limestone surface of the tomb and the marble slab that covers it were taken for dating.

Until the mortar was tested, researchers believed the tomb complex dated to the Crusader period (approximately between 1096-1291) because of the earliest architectural evidence that had been found up until the restoration.

That would have made the tomb no older than 1,000 years old. It would have also meant that it wasn’t the site Emperor Constantine’s delegates had identified as Christ’s burial place.

The results instead dated the mortar to around 345 A.D.

For Dr. Hiebert, the discovery was “mind blowing. It was a total surprise.”

The reason it was shocking, he said, was because the church had been extremely vulnerable over the years, undergoing several invasions and natural disasters.

“Our amazement of being there on October 26, 2016 was even more amplified when we got that information back,” said Dr. Hiebert.

For Dr. Hiebert, the experience proved that faith and science go hand-in-hand.

“I consider it as important of a faith-based project as it was a scientific project,” said Dr. Hiebert. “I think in today’s world where there’s this sort of tendency to think about a dichotomy between science and faith, this is a really excellent example of how science and faith coexist perfectly.

“There’s no choice,” he continued. “If you think about the great scientists of Western civilization — Galileo, Isaac Newton, even Albert Einstein — they were all scientists of great faith.

“That’s an important message that I want to tell kids and adults … is that faith and science coexist intractably and perfectly well.”

National Geographic is hosting a 3-D exhibit at its headquarters in Washington, D.C. that allows visitors to virtually visit the Church of the Holy Sepulchre.

“You actually walk into our museum that we have here in Washington, D.C. and you can experience basically what I experienced — walking the streets of Jerusalem, seeing the church for the first time, and then fast forwarding through time in an amazing 3D experience where you are brought right into the Holy Edicule,” said Dr. Hiebert.

“You don’t have to go all the way to Jerusalem to experience what I did,” he added. “You can come right here to Washington, D.C.