Open Wide Our Hearts: Lessons in racism from a pilgrimage to Montgomery 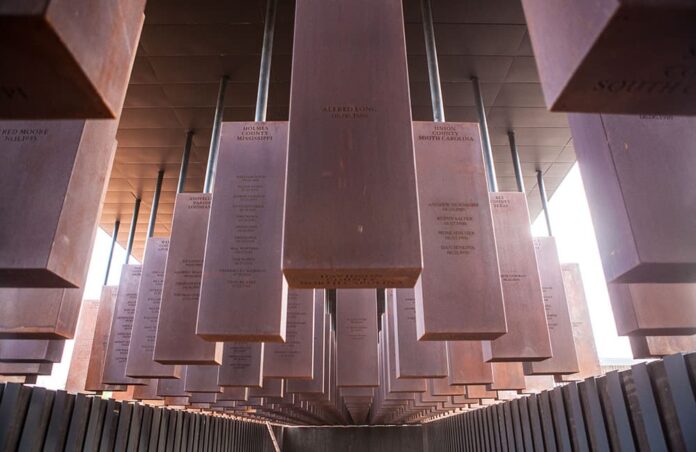 Just why would a group composed of Denver’s Auxiliary Bishop Jorge H. Rodriguez, a parish priest, a deacon and his wife, several religious women and their associates, and members of the Social Justice Ministry of a parish want to visit the Capital of the Confederacy in the heat of August?
The USCCB (U.S. Conference of Catholic Bishops) in its pastoral, “Open Wide Our Hearts: a pastoral letter on racism” tells us:

We love our country and we knew we’d enjoy the southern food but, more seriously, we wanted to peel back the cover on the tragic stories the bishops asked us to hear and to prepare ourselves for truth.

And that we did. Everywhere we went — Birmingham’s 16th Avenue Baptist Church, where four little girls died in a Ku Klux Klan bombing; the Kelly Ingram Park where marchers, including hundreds of children, grouped only to be fire-hosed and attacked by police dogs; and the city’s Civil Rights Institute paying homage to Dr. King’s Letter from a Birmingham Jail. We saw the lovely plaque to outstanding activists like Georgia’s Representative, John Lewis, who was bloodied in the “Bloody Sunday” Selma March in 1965; and now, still serving in the U.S. House of Representatives 59 years later, still endures insults.

In Montgomery, the Southern Poverty Law Center guide recited the stories of the 40 persons killed in the line of moral duty for the civil rights Cause in the 1950’s and 60’s. He shared the well-known story of Emmet Till and many other heroes and heroines we had never heard of.

Later, we stood outside with our hands in the water tracing their names memorialized in granite by Maya Lin. Not long before, one in our group asked us to pray over our young guide who daily brings these stories of brutal killings to life with passion and conviction. At the Rosa Parks Museum, we heard that the enactment of Rosa Parks’ action that precipitated the Bus Boycott happened for more than the fact that she was just “tired.” Rather, as the leader of the NAACP in her community, she and Dr. King’s civil rights activists strategized, organized and committed to endure what became a 381-day ordeal that gave birth to the civil rights movement in this country.

The most stunning stop on our pilgrimage, the Legacy Museum, challenged us to connect the dots between slavery, racial terror-lynching, segregation/Jim Crow, and today’s mass incarceration that began with Nixon’s War on Drugs in the 1980s. The mantra we came away with, “Slavery did not end; it evolved,” will never leave us. At the National Memorial for Peace and Justice, we listened to a lawyer affiliated with the Equal Justice Initiative tell stories of answering the pleas of innocents and over-sentenced persons on death row, many held in Alabama prisons. To date, Attorney Bryan Stevenson, the visionary force behind the Equal Justice Initiative, has initiated and successfully argued five cases at the U.S. Supreme Court level, winning reversal, release, or relief for 115 wrongly sentenced death row inmates. And, he has won the Supreme Court affirmation that it is now unconstitutional to deliver life-without-parole sentences to children 17 and under.

With the dots connected, we see the truth of the inequality and injustice that exists today. It disproportionately impacts persons of color. Now, we believe the statement: “Slavery did not end; it evolved.”

Visiting the forest of the hanging columns at the National Memorial, we read the names of 186 counties documenting 4,400 lynchings. It opened wide our hearts. We each wrote down a name and prayed aloud, “We remember you.”

Kamau Allen, one of the pilgrims, shared: “Most of my mother’s family were enslaved and later worked as sharecroppers in Caddo Parish, La. I grew up hearing stories about our history there and how many of my family members were abused, disappeared, or were lynched by mobs of white people. One ancestor in particular was named Charles Bell. We didn’t know what happened to him. Family legend says he suddenly went missing. He was my mother’s great uncle….on our pilgrimage, while standing under one of the hanging columns at the memorial, I saw his name: ‘Charles Bell lynched on Feb. 15, 1913.’ It was the same year he disappeared. I called my mother and she confirmed that it was him. As painful as it was to see my recent ancestor’s name on a memorial dedicated to the victims of lynchings, it answered a century-old question that existed in my family.”

Then, we celebrated — more good food — with Father Manuel Williams and the Church family at Resurrection Catholic Mission, where we stayed and sang and prayed. We heard from other civil rights activists who had known and worked with Rosa Parks. Father Williams’ own father had been a driver helping with some of the car pools during the Bus Boycott. The following morning, Bishop Rodriguez led Mass for the group before leaving Montgomery for home.

We set out on this pilgrimage with a purpose: to know more deeply the reality at the root of U.S. racial history. Now, transformed and grounded, we can better study and act to dismantle this evil.

So, the work of carrying this truth forward begins. What we have seen and heard compels us to tell the stories and to help our institutions. This falsehood of white supremacy can inadvertently determine our policies and actions. We must know what we do and correct this attack on human life. We re-open Genesis 1:26 and let God speak to us: “Then God said: Let us make human beings in our image, after our likeness.” All of us are made in the image of God. Let us grow into that likeness.

Featured image: The National Memorial in Montgomery, Al., features 800 weathered steel columns hanging from a roof. Each column features the name of an American county and are etched with the names of people who were lynched there. (Photo by Soniakapadia | Wikipedia)