On Fathers and Christian Masculinity 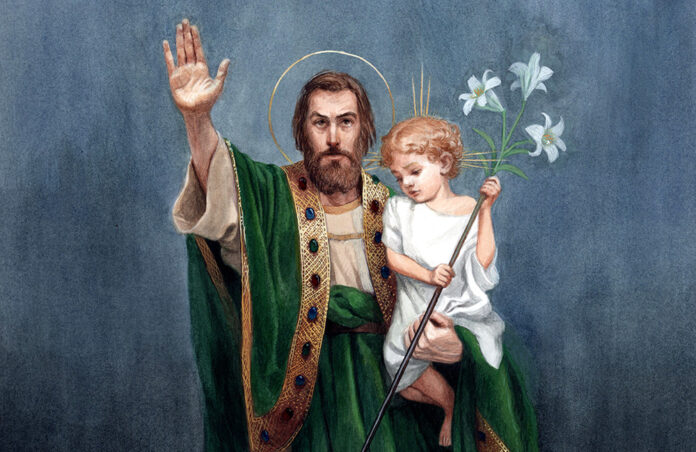 The Year of St. Joseph points us to Jesus’ adoptive father, Joseph, as the essential model for fathers. Joseph not only manifests genuine masculinity, he also images God’s own fatherhood, as Pope Francis makes clear in his apostolic letter, Patris Corde: “In his relationship to Jesus, Joseph was the earthly shadow of the heavenly Father: he watched over him and protected him, never leaving him to go his own way.” Jesus, though the Son of God, obeyed Joseph, learned from him, and worked with him, acknowledging Joseph as a true expression of God’s own fatherhood.

God does not just use fatherhood as an image of himself, because he himself is Father, even within his own triune life. Earthly fatherhood comes forth from him and should manifest his life and love. St. Paul speaks of honoring the “Father, from whom all fatherhood in heaven and on earth is named” (Eph 3:15). God wants everyone to be able to see his own fatherly love and called certain men to share in his own paternal gift of bringing forth life and caring for others. Every father is called to be liked Joseph, “an earthly shadow of the heavenly Father” for his own family.

Our culture, however, often denigrates masculinity, sometimes viewing even its proper expressions as toxic. We too often see maleness in its fallenness — dominating and selfish — rather than showing self-sacrificial service. In fact, later in Ephesians, Paul speaks of the true vocation of the husband and father: “Husbands, love your wives, as Christ loved the church and gave himself up for her” (Eph 5:25). He also speaks of the role of fatherhood: “Do not provoke your children to anger, but bring them up in the discipline and instruction of the Lord” (Eph 6:4). Paul shows us the goal of fatherhood — sacrificing himself for the flourishing of the family by putting the good of his wife and children before his own desires.

No matter what the contrary voices of our culture say, we need strong men and fathers. God created man and woman in complementarity, and they need each other to thrive, helping the other in relation to their own strengths and weaknesses. Children need the strong presence of a father to discipline and teach, as Paul reminds us. Study after study has shown that fathers have the largest impact on the faith of their children. Christian Smith explains in his sociological study, Young Catholic America, that “the faith of Catholic fathers is powerfully determinative of the future faith of their children (125). The same can be said for general wellbeing and success. When fathers are absent or refuse to exercise their role, a moral and spiritual vacuum appears. A strong majority of felons, for instance, grew up without fathers in the home.

St. Joseph helps us to understand the strength of Christian fatherhood. First, like any good husband, Joseph listened — not just to his wife but also to God. Woken up frequently by angels, he demonstrated obedience and trust, quickly leaving everything behind to follow God’s instructions and to protect his family. We also know Joseph for his work as a carpenter and builder, content to live simply and to work hard. Importantly, he also taught Jesus how to work, showing that fathers model and teach by drawing their children into their life and work. And we can also learn from Joseph’s humility, serving the Incarnate God and his Mother without even a single recorded word in the Gospels.

This humility points us to the essence of Christian fatherhood. Although living with two perfect people, Joseph was still called to lead. He quietly and humbly did what was needed for his family and taught his own maker how to share in his work. Fathers do not lead in order to be in charge or to get their own way. They lead because God asks them to care for and protect their families. Fathers and mothers share in the great and beautiful partnership of family life, although fathers cannot simply sit back and let mom take the lead in the spiritual life, as they are often tempted to do. Like Joseph, fathers should act firmly and lovingly to put God and the family before self, obeying God and leading the family in the right direction. They are called to model faith, work, and sacrifice to their children.

On Father’s Day we can affirm that masculinity and fatherhood are not just good — they are essential to understanding God and his plan for human flourishing. If our culture turns around, it will be because, in large part, Christian men stand up and fight. As Christians, we cannot give in to the culture’s attempt to denigrate masculinity and fatherhood or to pit men and women against each other. We can use this celebration to affirm the essential role that our fathers play, leading their families like St. Joseph.