On Earth Day, Pope Francis urges solidarity with most vulnerable 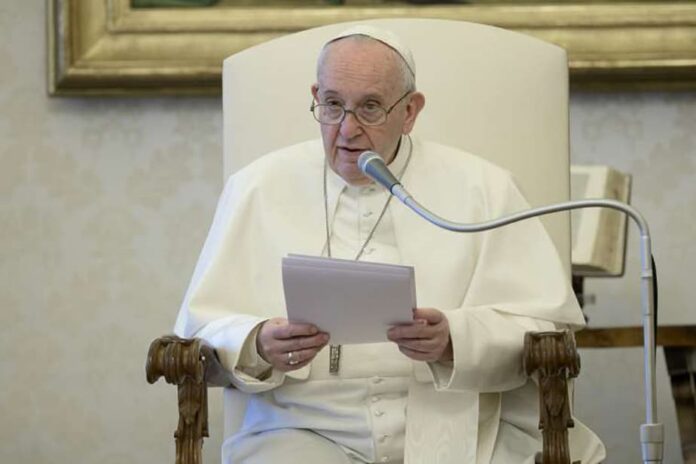 Commenting on the celebration of Earth Day during his general audience Wednesday, Pope Francis urged people to show solidarity with the weak and vulnerable and to protect humanity’s common home.

According to Pope Francis, Earth Day “is an occasion for renewing our commitment to love and care for our common home and for the weaker members of our human family.”

“As the tragic coronavirus pandemic has taught us, we can overcome global challenges only by showing solidarity with one another and embracing the most vulnerable in our midst,” the pope said April 22.

He called for a renewed sense “of sacred respect for the earth, for it is not just our home but also God’s home,” adding that “this should make us all the more aware that we stand on holy ground.”

“In this Easter season of renewal, let us pledge to love and esteem the beautiful gift of the earth, our common home, and to care for all members of our human family,” Francis urged.

“Like the brothers and sisters that we are, let us together implore our heavenly Father: ‘Send forth your Spirit, O Lord, and renew the face of the earth.’”

Pope Francis delivered his weekly catechesis via livestream from the Vatican’s apostolic library, saying selfishness had led people to fail in their responsibility “to be guardians and stewards of the earth.”

“We have sinned against the earth, against our neighbours, and ultimately against the Creator, the benevolent Father who provides for everyone, and desires us to live in communion and flourish together,” he stated.

Being made in the image of God, he said, means “we are called to have care and respect for all creatures, and to offer love and compassion to our brothers and sisters, especially the most vulnerable among us, in imitation of God’s love for us, manifested in his Son Jesus, who made Himself man to share this situation with us and to save us.”

Francis said there was a Spanish saying that “God forgives always; we men forgive sometimes; the earth never forgives.”

“The earth never forgives: if we have despoiled the earth, the response will be very bad,” the pope commented.

Pope Francis also noted his appreciation for national and local environmental movements which “appeal to our consciences,” though he said it will still “be necessary for our children to take to the streets to teach us the obvious: we have no future if we destroy the very environment that sustains us.”

“We can each contribute in our own small way,” he encouraged.

The pope also urged awareness and cooperation on the international level, calling on leaders to guide preparations for the upcoming conferences COP15 on Biodiversity in Kunming, China, and COP26 on Climate Change in Glasgow, Scotland.

“These two meetings are very important,” he said.