His Church. Our Experience.
Subscribe
HomeBack-to-SchoolCatholic schools office gets to work on new vision
Back-to-SchoolLocalSchool News

Catholic schools office gets to work on new vision 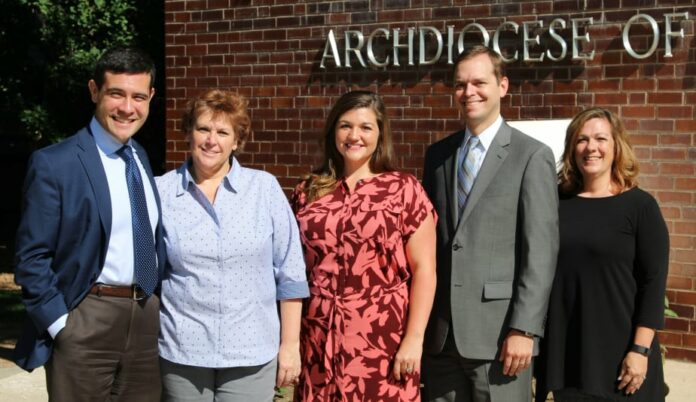 Several months after the Officeof Catholic Schools released a vision document outlining ways in which they plan to continue to provide quality education to its students and form intentional disciples of Jesus
Christ, the office has announced five new additions to their staff.

The positions filled include Associate Superintendent, Director of Latino Enrollment and Engagement, Director
of Curriculum and Instruction, Instructional Effectiveness Specialist, and Administrative Assistant.

All of these positions will be key to implementing the vision.

Adam Dufault replaces longtime Associate Superintendent of Catholic schools Mary Cohen, who retired at the beginning of July. He will work closely with Superintendent of Catholic Schools Kevin Kijewski to monitor, coordinate and supervise all archdiocesan school system operations. Dufault has previous experience as an elementary principal in the Archdiocese of Chicago, and holds a Bachelor’s of Science in Foreign Science from Georgetown University in Washington D.C. and a Master’s of Arts in both Teaching and Educational Administration from Dominican University in Illinois.

Carlos Hernandez will serve as he newly appointed Director of Latino Enrollment and Engagement. This is a new position within the Office of Catholic Schools whose role was deemed necessary due to the rapidly-growing Latino demographic in the Archdiocese of Denver. Hernandez’s responsibilities will be to provide support to Catholic school principals and pastors with outreach and marketing efforts designed to increase Latino enrollment in Catholic schools. Hernandez has previously held positions in marketing, Latino outreach and alumni relations at the Daniels Fund and ACE Scholarships, and holds a Bachelor of Arts from CU-Denver.

Denise Campbell will serve as the new Director of Curriculum and Instruction. Her responsibilities will involve the planning, development, implementation and evaluation of the curricular and instructional programs of the archdiocesan school system. Campbell has previous experience as an elementary principal in the Diocese of Phoenix and an administrator in public education. She holds a Bachelor of Arts in Elementary Education from the University of Missouri and a Master of Education in Educational Leadership from Northwest Missouri State University.

Abriana Chilelli will serve as the newly appointed Instructional Effectiveness Specialist. She will work to coach classroom teachers in schools within the district to support student learning and teacher practice. She previously worked as a teacher who did instructional coaching at Denver School of Science and Technology and holds a Bachelor of Arts in English from Franciscan University of Steubenville and a Master of Education in Curriculum and Instruction from CU-Boulder.

Patty Lunder will serve as an administrative assistant in the Office of Catholic Schools. She will work directly with Dufault and Campbell to support their efforts. She has previous experience as a school secretary at St. Louis Catholic School in Englewood. She holds a Bachelor of Arts in Communications from Regis University.