Of St. Nick and Christmas trees 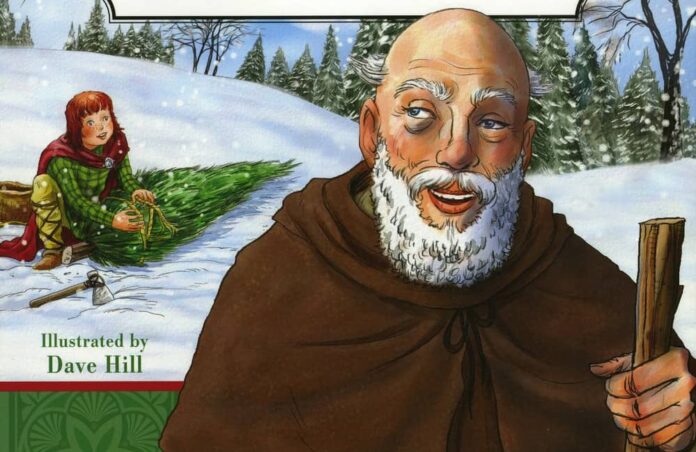 On Dec. 6, the Church celebrated the patron saint of children, St. Nicholas (270 – 343 A.D.), bishop of Myra in Asia Minor (present day Turkey). This saint became associated with giving gifts to children, because he saved three young girls from destitution and servitude by dropping bags of gold through the window (or perhaps through the chimney). His feast day constituted a major celebration in Europe and gave occasion for young boys to dress up as bishops. The Dutch, even after abandoning the Catholic faith, continued to celebrate the feast of children and brought it to the new world, and the celebration continued into the newly formed United States.

From the celebration of St. Nicholas came the invention of Santa Claus, first from a sketchbook by Washington Irving and then in 1822 within Clement Clarke Moore’s “Twas the Night Before Christmas” (originally titled “An Account of a Visit from St. Nicholas”). Moore added fantastical elements to the saint, such as reindeer and his sleigh, and connected him with giving gifts down the chimney. Later in 1881, cartoonist Thomas Nast gave Santa Claus the classic look we now expect, with the long white beard, red suit, and thick belt. Through these steps, a Catholic saint became a secular, cultural icon.

Another saint, Boniface, became linked to the tradition of the Christmas tree. A Benedictine monk from England, Boniface set out on a number of missionary journeys to Germany. He miraculously cut down a tree associated with pagan worship and appropriated it for Christian use. The connection of trees to Christmas grew stronger with their use in medieval mystery plays to represent the tree of paradise on Christmas Eve, using apples as decorations. In early modern Germany, the trees represented the new life of Christ, coming fresh and anew each Christmas even in the midst of winter, with red ornaments symbolizing his blood and candles representing the light of faith. With these traditional signs everywhere, Catholics can recover their religious meaning and reconnect them to Christ and the saints.

In this vein, local author Claudia McAdam offers a retelling of the origins of the Christmas tree in a children’s book, Kristoph and the First Christmas Tree: A Legend of St. Boniface (Paraclete, 2015). Set in Germany on Christmas Eve in the year 722, the missionary Boniface journeys through the snow with an orphan, Kristoph, as they come upon a pagan sacrifice before an oak tree. When Boniface challenges their worship of the oak, the chieftain asks him to prove he has more power than the tree. With one blow of the axe, Boniface toppled the large oak, as a smaller evergreen appeared on its stump. The saint uses the tree to teach the pagans about the gift of Christ:

“Boniface drew his fingers along a branch of the evergreen. ‘This child of the forest is the wood of peace. See how it points toward heaven?’ The men’s eyes lifted skyward. ‘It is the sign of endless life, for its branches are ever green. Let this be called the tree of the Christ Child. Gather around it, not in the wild woods, but in your homes. It shall not shelter evil deeds, but loving gifts and lights of kindness.”

Kristoph cuts down another tree, bringing it home to adorn the celebration. “A sharp, sweet scent of evergreen wrapped them like a quilt as they trudged onward toward hearth and home, happiness and hope — and a joyous celebration lit by a beeswax candle atop a Christmas tree.”

McAdam ends the book with a prayer of blessing for Christmas trees, helping families to recover the trees as a sign of Christ’s “endless life.” Although Santa Claus and Christmas trees both stem from the lives of saints, Catholics have to connect them to their origins. Telling the stories of these saints and saying prayers during the celebration can provide opportunities for evangelization and a deepening of the traditions we love by drawing them back to Christ.