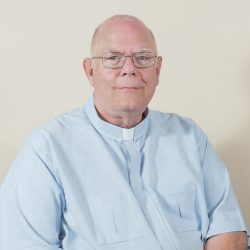 Br. Thomas (Tom) Wright, C.Ss.R., an exceptional administrator who served as Treasurer of both Liguori Publications and the Denver Province, died while in the initial stages of treatment for pancreatic cancer in Whittier, CA on April 25, 2022. Known for his financial expertise and strict adherence to proper protocols, he served his confreres with efficiency and generosity for 51 years. Thomas Fredrick Wright was born on April 5, 1946 in Chicago, IL. He grew up in the shadows of St. Michael Parish and attended St. Michael School. As a young man, he worked as an assistant to Br. Columban at the parish and was inspired to enter the Redemptorist Brothers School at Pine City. His attention to detail paid off when he was assigned to assist in the kitchen. He became an accomplished cook, much to the delight of his confreres. After making his first profession of vows on August 2, 1966, he served as Assistant to the Registrar at Immaculate Conception College in Oconomowoc, WI, and then at Holy Redeemer College in Waterford, WI. He professed perpetual vows on March 15, 1971, and began a lengthy ministry in the financial arena. Br. Tom served as a financial administrator at St. Joseph’s Preparatory College in Edgerton, WI from 1972 until 1977, and then was assigned to a similar position at St. Alphonsus Parish in Chicago for two years. After a brief stint as Director of Food Services at Mount St. Alphonsus Theologate in Esopus, NY in 1980, he returned to Holy Redeemer College as Director of Financial Aid and Vice President of Plant Operations, positions he held until 1984. Recognized for his financial acumen, Br. Tom was appointed Treasurer of Liguori Publications at Liguori Mission House in Liguori, MO, a position he held from 1984 until 1995. Leadership delegated responsibility for supervising construction of St. Clement’s Health Care Center to him in 1987. Upon completion of the new facility, he assisted with the transfer of elderly, infirm confreres from Oconomowoc. Br. Tom was appointed Assistant Treasurer of the former St. Louis Province in Glenview, IL in 1995. When the Denver Province was formed in 1996, he remained in the Office of Financial Services and relocated to Denver, where he was named administrator of the local community. He was appointed Treasurer of the Denver Province in 2002, a position he retained until 2007. Br. Tom served briefly as Administrator of Health Services at St. Clement’s before returning to Denver as Assistant Treasurer in 2008. He was 65 years old when he joined the staff of St. Alphonsus Parish in New Orleans in 2011. Four years later, he joined the Evangelization Community at St. Mary of the Assumption Parish in Whittier, where he served as Business Manager until September of 2021. Donations in Br. Tom’s memory to continue the work of the Redemptorists may be sent to: Redemptorists of the Denver Province 1633 North Cleveland Ave. Chicago, IL 60614 Eternal rest grant unto him, O Lord, and may perpetual light shine upon him. May he rest in peace.