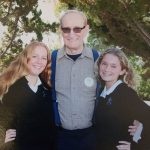 Thomas A. Hine died on September 17, 2022 in San Diego, California. Tom was born March 9, 1940 in Queens, New York to Henry Hine and Anne Margaret Canning Hine. The second of four siblings, Tom spent his childhood in Rockville Centre, New York on Long Island and attended grade school at St. Agnes. He loved sports and was on every team. He engaged in high jinks, including with a missing cement mixing tub as a youngster. Tom’s mom died of rheumatic fever when he was 14.  Hence, he was very nervous when his granddaughters Alanna and Michaela caught strep throat, since his mom died of complications of it. Tom’s dad remarried Grace Carlow and the family moved to Denver in 1954. Tom tried hard to lose his New York accent (successfully) because the kids in Colorado made fun of it. He loved skiing and being outdoors. Tom was passionate about camping, experiencing nature and the mountains. At Mount Carmel High School in Denver he excelled in high school debate, a fantastic skill for his eventual careers as teacher and lawyer. While in high school, he also served in the Marine Reserves, doing his basic training at Camp Pendleton, a military path his son also chose. Tom was a proud American serviceman, descended from a union soldier who was shot and killed by a confederate sniper in New York– the only American to die on duty in the Civil War in New York. Tom earned a B.A. in English Literature and obtained his teaching certificate. While teaching grade school, he earned a Master of Arts in History, and then taught at North High in Denver. Tom met Irene Kress while at Regis College at a dance for Loretto Heights College girls. Tom and Irene married in 1965. Their daughter, Cassandra, was born in 1968. Tom (while teaching) graduated from the University of Denver Law School and began work as an attorney with the United States Department of the Interior at the Solicitor’s Office in 1973. This program chose five attorneys every year from the top law graduates in the country. That same year, Tom’s son Stephen was born and the family moved to Falls Church, Virginia. The following year, he became an attorney advisor at the Department of Energy in Washington D.C. In 1978, he was promoted to the position of General Counsel for the Western Area Power Administration in Colorado. In 1983, he became the Boulder City, Nevada area manager for Western Area Power, a job that involved overseeing power distribution at Hoover Dam, and marketing the power produced by federal facilities in Nevada, Arizona and California. In that position he negotiated the 50-year power contracts for the dam. When Tom retired from public service he began working with the firm of Martinez and Curtis in Phoenix, Arizona. He helped negotiate the Multi Species Conservation Act of the Lower Colorado River Basin, which protects endangered species while maintaining water rights for irrigation districts in the West. After his divorce from Irene in 1985, Tom remarried. His second wife, Faith Saunders died shortly after their wedding in 2006. Tom was proud of his grandchildren John and Ali Ferrannini. He reveled in John’s commencement speech at Christian Brothers High School in Sacramento. He boasted about John’s newspaper career in college and his news editing at KRON in San Francisco. Tom attended his granddaughter Ali’s graduation at the University of Oregon and delighted in her major—Biology, and of her travels to Japan and Egypt. Tom moved to San Diego in 2002 shortly after Alanna (Stephen’s daughter) was born. He fell in love with her when he held her in his arms. He stopped smoking to be a dynamic influence in her life and to help care for her.  When Alanna’s sister Michaela was born, he continued the loving grandfathering that was key to her self-confidence and empathy. He was the perfect history geek/teacher/lawyer as he traveled the world with the Hine family, learning the story of Native Hawaii, indigenous Alaska and classic Western European civilization. Tom is survived by his children Cassandra Ferrannini (Andy Ferrannini) of Sacramento and Stephen Hine (Mrs. Michon Hinz Hine) of San Diego, by his grandchildren Alexandra Ferrannini of Washington, John Ferrannini of San Francisco, and Alanna and Michaela Hine of San Diego. He is also survived by his 3 siblings, Marie Martin (Roger) of New York, Kathy Kindblade of Denver and Phil Hine of Seattle. Funeral mass is Thursday, November 10 at 10 am at St. Mary Magdalene Church, 1945 Illion St., San Diego. Lunch will be provided afterwards.