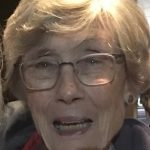 Funeral for former Loretto President Sister Marian (formerly Sister Marian Joseph) McAvoy SL celebrated July 7; served two terms; resided in Denver area for more than 15 years    A funeral for Sister Marian (formerly Sister Marian Joseph) McAvoy SL was celebrated July 7 in the Church of the Seven Dolors on the grounds of Loretto Motherhouse in Nerinx, Ky. Sister Marian, who served eight years as Loretto’s president, died June 30 at Loretto Motherhouse.  She was 94 and in the 71st year of her Loretto commitment. Born July 15, 1927, in Kansas City, Mo., to Edith K (Nilges) and Bernard F. McAvoy, Sister Marian was baptized Lucille Marie McAvoy. She was received into the Sisters of Loretto at the Foot of the Cross on Dec. 8, 1951. She earned a bachelor’s degree in English, with minors in history and philosophy, in 1949 from Webster College (now University) in St. Louis, a master’s in English in 1963 from St. Louis University and a master’s in pastoral theology in 1969 from Loyola University, Chicago. Sister Marian lived much of her life in the service of the Loretto Community, including as Loretto’s president, serving for two terms from 1978 to 1986 at the Denver Loretto Center. In 1970, she had been asked to serve on the first staff for the newly reorganized government of Loretto as Director of Work Development, remaining in that position until she was elected Loretto’s second president. Sister Marian was interested in international matters and promoted learning in this area throughout her life, encouraging a movement from national independence to global interdependence. As Loretto’s president, she designed a project in which a number of Sisters of Loretto had the opportunity to live and work in what was then known as Third World areas. Her emphasis in broadening Loretto’s vision continued through her retirement years at Loretto Motherhouse. From 1994-1997, Sister Marian served as adjunct faculty at Webster University, where she particularly enjoyed teaching a seminar on women with a global focus. She was  both a member of the national board and executive committee of LCWR (Leadership Conference of Women Religious). With Barron Hilton, Sister Marian initiated the Hilton Fund for Sisters and served as charter member and vice chair of its Board of Directors. For 10 years, she directed the Loretto Leadership Workshop, an annual week-long event for elected and appointed leaders from Loretto high schools. Among her earlier ministries, Sister Marian taught in elementary and secondary schools in St. Louis, Illinois and Kentucky, served in pastoral ministry in Iowa, and was Loretto’s Community Group Coordinator from 1997-2001. Preceding her in death were her parents and five siblings. Among survivors are her brother Louis (Lou) McAvoy of Kansas City, Mo., and several nieces and nephews. Burial was in Our Lady of Sorrows Cemetery on Motherhouse grounds. Memorials may be made to the Sisters of Loretto for our mission, c/o Loretto Motherhouse, 515 Nerinx Road, Nerinx, KY 40049 or as an online gift at www.lorettocommunity.org.