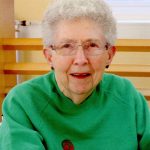 Funeral for Loretto Sister Evelyn Marie Houlihan celebrated July 22; in Denver, she taught, was a real estate associate and longtime manager of Bonnie Brae Ice Cream Store  – A funeral for Sister Evelyn Marie Houlihan SL was celebrated July 22 in the Church of the Seven Dolors on the grounds of Loretto Motherhouse in Nerinx, Ky. Sister Evelyn died July 16 at Loretto Motherhouse.  She was 90 and in the 72nd year of her Loretto commitment. Among her ministries in the Archdiocese of Denver, Sister Evelyn taught, was a real estate associate and managed a local ice cream store for 14 years. She was born June 2, 1932, in Sterling, Ill., to Elizabeth (Schmidt) and Harold Houlihan, and was received into the Sisters of Loretto at the Foot of the Cross on April 25, 1951. Sister Evelyn earned a bachelor’s degree in elementary education, with a minor in English, in 1960 from Webster College (now University) in St. Louis, a master’s in guidance and counseling in 1969 from the University of Notre Dame in South Bend, Ind., and a master’s in religious education in 1976 from Boston College in Chestnut Hill, Mass. Early in her ministry, Sister Evelyn taught primary grades in Kentucky, Illinois and Colorado, serving in the Denver Archdiocese at St. Vincent School (1963-1964), St. John School (a portion of 1966), Blessed Sacrament School (October 1966-1967) and Holy Family School (1968-1969). In 1969, she returned to Blessed Sacrament, where she taught junior high and girls sports until 1972. Sister Evelyn was proud that her girls’ basketball team won the All City Parochial Tournament. While teaching, she also worked a few years with youth as a Denver Court system volunteer. In addition, Sister Evelyn was a counselor with Native Americans from Rosebud Reservation as part of the University of South Dakota’s Upward Bound program and with Head Start in South Bend, Ind. While in Denver, from 1972 to 1976 she was coordinator of high school and adult education at St. James Parish and from 1976 to 1978 was a pastoral assistant at St. Anthony Hospital. Receiving her real estate license in 1978. Sister Evelyn worked for many years as a real estate associate, first with Stone & Buckles Real Estate Co. and then Simon & Co. From 1987 to 2001, she managed the Bonnie Brae Ice Cream Store, Denver. As manager, Sister Evelyn said she “needed every skill I ever used in the classroom.” During her tenure, the store was famous for its homemade ice cream, good service and well-trained employees. Sister Evelyn scaled down her other workload when diagnosed with Multiple Sclerosis in 1998. She served the Loretto Denver Staff Office as bookkeeper from 2001 to 2010. In 2014, she moved to Loretto Motherhouse, where she resided until her death. Sister Evelyn said she “refused to live an ‘unlived life.’” She traveled extensively, including to Europe, Canada, Jamaica, Thailand, Laos, Mexico and Cambodia, and also skied, hiked and rode bikes. Nature, Sister Evelyn said, had “always been my cathedral and house of prayer.” Preceding her in death were her parents, her brother, Robert Ray Houlihan, and her sister, Virginia Ann Wolfe. Among survivors is her nephew Daryl Wolfe of Des Moines, Iowa. Burial was in Our Lady of Sorrows Cemetery on Motherhouse grounds. Memorials may be made to the Sisters of Loretto for our mission, c/o Loretto Motherhouse, 515 Nerinx Road, Nerinx, KY 40049 or as an online gift at www.lorettocommunity.org.