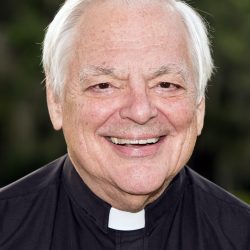 Father Callahan will be remembered in a Mass of Christian Burial in the Loyola Room of Jesuit Hall on Tuesday, Feb. 1, at 4:30 p.m., with a visitation in the same location from 4:00 to 4:30 p.m. Interment will be the following morning, Feb. 2, at 9:00 a.m. at Calvary Cemetery in St. Louis. The Mass will be livestreamed; go to YouTube and search for “Father Jack Callahan Funeral Mass” or use this URL: https://youtu.be/Svy_dUfsoHw.

Father John J. “Jack” Callahan, SJ, died Jan. 21, 2022, in St. Louis. He was 82 years old, a Jesuit for 64 years and a priest for 51 years. Jack Callahan was born in Plymouth, Wisc., on Sept. 25, 1939, to John J. and Anna Agnes Plotz Callahan. In addition to his parents, he was preceded in death by his brother, William J. Callahan, SJ, who was a member of the Wisconsin Province of the Society of Jesus. He is survived by his sister, Teresa Ann Cronin, several cousins and his brothers in the Society of Jesus. He graduated from Campion Jesuit High in Prairie du Chien in 1957 and entered the Jesuit Novitiate of the Wisconsin Province in Oshkosh, Wisc. on August 25, 1957. He pronounced first vows on Sept. 8, 1959. He was ordained to the priesthood on June 10, 1970, in the Gesu Church in Milwaukee, and pronounced final vows on April 19, 1986, at Regis University in Denver, Father Callahan taught Spanish and speech at his alma mater in Prairie du Chien from 1964 to 1967, before going to the Saint Louis University School of Divinity to study theology. From 1977 to 1983, he was missioned to Creighton University in Omaha, first as assistant director of admissions and then as vice-president for university relations. Father Callahan served at Regis University from 1983 until 1997, the first five years as assistant vice-president for development, and then for the remainder of the time as assistant to the president for mission. He also served as rector of the Jesuit community 1991-97. After a year of sabbatical, Fr. Callahan reported to Rockhurst University in Kansas City, Mo. as director of mission and values (1998-2004) and as rector of the Jesuit community. In 2004 he transcribed (transferred) from the Wisconsin to the Missouri Province and was called to St. Louis to be assistant to the president of Saint Louis University for mission and ministry (2004-07) and provincial assistant for pastoral and spiritual ministries (2004-09). He had a year’s sabbatical before moving to Manresa House of Retreats in Grand Coteau, La., where he was a retreat director from 2010 until December 2017, when he was missioned to the Jesuit Spirituality Center in Grand Coteau to do spiritual direction and directed retreats. He moved into the Jesuit care facility in Grand Coteau in April 2020. He transferred to the Jesuit care facility in St. Louis in July 2021. Father Callahan is remembered as a cheerful presence, courteous and fun in community. He had an easy, natural way of connecting with people. He gently guided many colleagues and retreatants into deeper appreciation of Ignatian spirituality. Despite discouragement brought on by failing eyesight, in his brief time at Grand Coteau he delighted in making the novices laugh. Father Callahan earned a bachelor’s degree in philosophy, a licentiate in philosophy and a master’s degree in political science, all from Saint Louis University. We remember with gratitude all that God has done through Fr. Callahan’s life of service to God and God’s people. Memorial gifts may be made to the USA Central and Southern Province of the Society of Jesus at 4511 West Pine Blvd., St. Louis, MO 63108 or through the province website at www.JesuitsCentralSouthern.org.