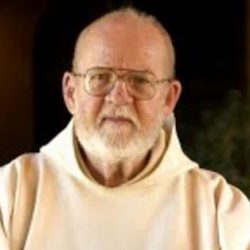 Father William Meninger, O.C.S.O., a Trappist monk of St. Joseph’s Abbey in Spencer, died in the monastery’s infirmary on Sunday morning, February 14, 2021. Born William Austin Meninger in Malden, Massachusetts on August 29, 1932, to John Joseph Meninger and Katherine T. Foley, he graduated from Everett High School in 1950 and St. John’s Seminary in Brighton in 1958. He earned a master’s degree in Sacred Scripture and continued postgraduate work at Seattle University, Harvard Divinity School and Boston University. He served as a secular priest of the Diocese of Yakima, in the State of Washington, where he worked on an Indian reservation and with migrant workers until he entered St. Joseph’s Abbey in 1963. He made temporary profession as a monk in 1965 and pronounced his solemn vows in 1970. At St. Joseph’s Abbey, Father William was the monastery’s guestmaster and retreat master for 15 years. He also served as prior, dean of the junior professed monks and professor of scripture, liturgy, and patristics. In 1974 he initiated a program of studies based on The Cloud of Unknowing, the work of an anonymous 14th century English hermit. Fr William’s efforts to promote the message of this book developed, with the cooperation of Fr. Thomas Keating and Fr. Basil Pennington, fellow monks of the abbey, into an international network of conferences augmented by scores of published books amplifying an approach to contemplative spirituality known as Centering Prayer, with the purpose, in part, of proposing to Christian readers the centuries-long existence of an orthodox and venerable alternative to Eastern forms of meditation. In 1982 Fr. William transferred his monastic stability to the Spencer abbey’s daughter-house of St. Benedict in Snowmass, Colorado where he served as prior, novice master and vocations director as well as professor of theology and scripture. He spent three years in Israel continuing scripture studies at the École Biblique in Jerusalem while living at the Trappist Abbey of Latroun. In 2020, with his health declining, he transferred back to St. Joseph’s Abbey to live in its infirmary where, as his energy allowed, he continued engaging in regular Zoom conferences on contemplative prayer. Fr. William was one of nine siblings. He is survived by his sister Pat Apruzzese and her husband Vincent, his sister-in-law Carol Meninger and numerous nieces and nephews, as well as his valued friend, Dan Dobbins of Tallahassee, Florida, who made possible and facilitated Fr. William’s endeavors at outreach. With gratitude for his venerable presence among us, the brothers commend Father William’s soul to your prayers. Due to the restrictions of COVID-19 protocols, services and burial were private.