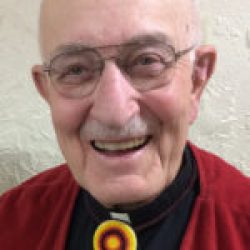 Father Damhorst’s life will be celebrated in a memorial Mass on Wednesday, Aug. 4, 2021, at 7:15 p.m. in the 15th floor chapel of Jesuit Hall in St. Louis. This Mass is private. He donated his body to science, so there will be no burial.

Father Joseph E. Damhorst, SJ, Pastoral Minister, died July 18, 2021 in St. Louis. He was 84 years old, a Jesuit for 65 years and a priest for 53 years. He will be remembered for his wisdom, humor and sensitivity. Joseph Damhorst was born in Quincy, Ill., on Nov. 9, 1936, to Clarence F. and Erma Meyers Damhorst. In addition to his parents, he was predeceased by his brother Clarence E. Damhorst and sisters Shirley Cameron and Elaine Boudreau. He is survived by his brothers in the Society of Jesus. He entered the Jesuit novitiate of the former Missouri Province in Florissant, Mo., on Aug. 17, 1955, and pronounced first vows on Aug. 22, 1957. He was ordained a priest on June 4, 1968, at the Cathedral Basilica of St. Louis. He pronounced his final vows as a Jesuit on Aug. 15, 1973. Father Damhorst’s first assignment following ordination was in vocation promotion, first in Florissant (1969-1970) and then at Rockhurst University in Kansas City, Mo. (1970-1975). From 1975 to 1980, Fr. Damhorst was assigned to St. Francis Xavier Parish in Kansas City. For the last three years of this assignment, he served as pastor. He then returned to St. Stephen’s Mission in Wyoming, where he had served while in formation more than a decade before. There, he devoted himself to mission work and served as superior and pastor from 1981-87. Following a yearlong sabbatical at St. John’s College in Belize, he spent three years in St. Louis directing the province mission office. In 1990, he was missioned to Our Lady of Sorrows Parish in South Dakota, where he did pastoral ministry at the Red Cloud Mission among the Lakota Sioux. From 2002 to 2008 Fr. Damhorst was superior and pastoral minister at St. Patrick’s Church and then at Holy Apostles Church, both in the Diocese of Colorado Springs. He returned to Belize in 2008 and served for three years as pastor of St. Martin de Porres Parish. He then returned to St. Louis, serving as chaplain at Loyola Academy for two years before moving to the Xavier Jesuit Center in Denver. Here, Fr. Damhorst did pastoral ministry, a good portion of which was serving as the chaplain to the Kateri Catholic Community and on the board of trustees of Arrupe Jesuit High School. Father Damhorst had a deep love for nature and the environment. His work on the reservations gave him a deep love and appreciation for Native peoples. He learned some Lakota and liked to decorate his room with arts and crafts of Native peoples. He also had a soft spot for the marginalized and neglected. He was a wise counselor to those in charge and a good community man who was sensitive to his Jesuit brothers’ needs and helpful when they were hurting. He will be missed. He earned a bachelor’s degree in Philosophy & Letters and a Master of Divinity from Saint Louis University. He also earned a master’s degree in zoology from the University of South Dakota. Declining health forced Fr. Damhorst to return to St. Louis just this summer.