His Church. Our Experience.
Subscribe
HomeLocalNotre Dame parish brings Liturgy of the Hours into the home with...
LocalParish News 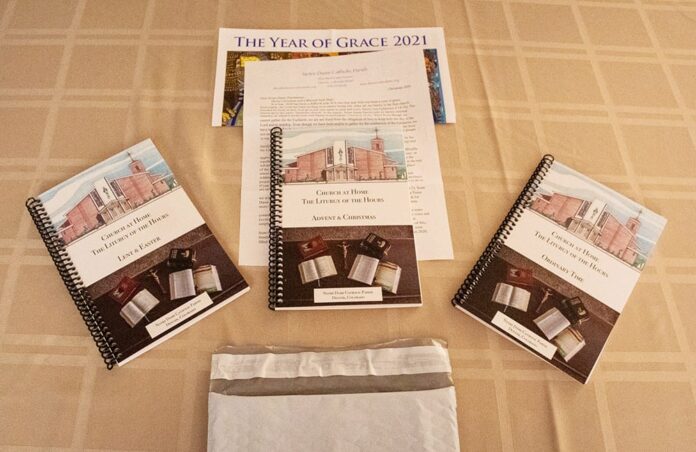 Last spring, while everybody was stuck at home during the height of the pandemic, Notre Dame Parish in Denver saw an opportunity for spiritual renewal among its parishioners.

With Masses shut down for a time and then celebrated with limited attendance capacities in the months that followed, Notre Dame pastor Msgr. Edward Buelt sought to bring the liturgy to his parishioners so they could still feel connected to the Church. More chiefly, he wanted to encourage families to pray together at home and keep the Sabbath holy. Thus, Notre Dame’s Church at Home program was born.

“The real genesis was the pandemic, but then that brought together a lot of liturgical and theological and ecclesiastical strands to weave together into what we’ve developed,” Msgr. Buelt told the Denver Catholic. “Everyone was at home during the pandemic. We were all isolated or quarantined or socially distancing. And one day began to run into another day and people were not able to attend church, especially the Eucharist, and otherwise come together in community. Since they couldn’t come to Sacred Liturgy, we had to take the Sacred Liturgy to them.”

Msgr. Buelt had previously implemented a similar initiative during his tenure as pastor of Our Lady of Loreto Parish in Foxfield. The program is based on the Liturgy of the Hours, the daily prayer of the Church which, contrary to its well-known association with religious life, was actually started by laypeople in the Church as early as the second century.

One of main goals of the Church at Home program, then, is to reinstate the Liturgy of the Hours as a prayer done by laypeople, and more specifically, by the family at home – the domestic church, as it were.

“The family is the first church Christ founds,” Msgr. Buelt said. “If we really believe what Jesus said when Jesus said, ‘when you pray, go home to your rooms, close the door,’ then maybe this is an opportunity. The pandemic’s given us a wonderful opportunity by Christ to get back to the the family, the domestic church.”

The way Msgr. Buelt and ministry and evangelization assistant Andre Escaleira, Jr. did this was by adapting the Liturgy of the Hours to a format that was easier for the average layperson and family to follow and implement as a daily practice within the busyness of their own life.

“We said that the four week, 28 day cycle of Liturgy of the Hours is too complicated for someone who’s got three little babies and her husband home sick or whatever,” Msgr. Buelt explained. “It’s too complicated for priests and nuns who take years to learn it. [So we said] let’s adapt it, let’s just make it the three primary hours: morning, evening and night. Let’s make it a seven day cycle. Let’s go through and choose songs and canticles that might speak to people more than otherwise.”

After establishing the prayers, Psalms and canticles for each day, they put together guides for the three major liturgical seasons: Ordinary Time, Lent/ Easter, and Advent/Christmas. Then they printed copies for all of their registered parishioners and mailed them out. For convenience, the guides are also available in digital formats on their parish website for anyone to download for free.

Throughout the pandemic, Msgr. Buelt said he’s observed three sources of renewal for the Church that he prays become more apparent as life returns to normal: The Scriptures, the Sacred Liturgy and the Sabbath. He hopes that the Church at Home program proves to be useful in helping people to place more emphasis on these three crucial elements of the Church.