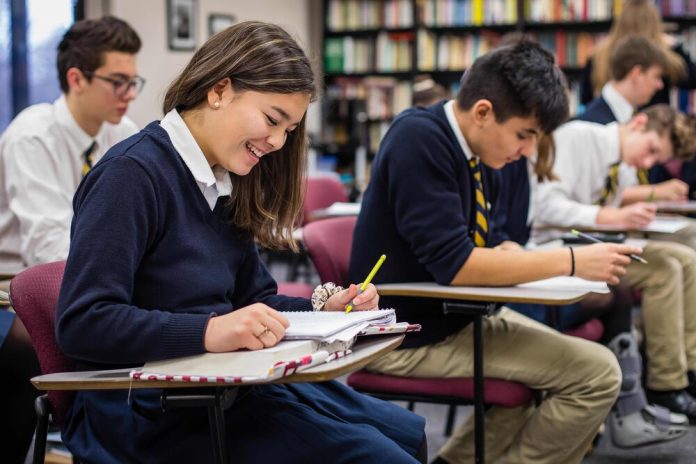 It’s a great time to be a Catholic high school student in Northern Colorado.

St. John Paul II High School in Windsor recently obtained land for the construction of a permanent location. The first Northern Colorado Catholic high school has obtained 50 acres at the corner of Highway 34 and County Road 13 that will be an intermediary of the Northern Colorado communities. The newly-founded high school has been graciously supported by donors to provide affordable tuition and grant many students scholarships.

Headmaster Blaise Hockel wants to encourage those who feel led to help financially with the process of the building project to donate to the capital campaign that will begin in January. The end-of-year appeal which began Nov. 14 and will go to Dec. 31 is the largest fundraiser the school holds, which helps with the upcoming year’s operational costs.

The school recently acquired the land, and thankfully, it was a smooth process with the help of Encore Development in Johnstown. The building process is steadily going and the school will use its due diligence through Integrated Design Group (IDG). The company is also in charge of the design and master plan of the first phase of building.

In a press release, Deacon Rob Lanciotti, Chairman of the school Board of Trustees, mentioned that the location of the land was selected conscientiously for access to the surrounding cities.

“It’s a perfect property for serving our region of the state,” Lanciotti said. “It’s fantastic to see how Catholic families are coming together to rally around the crucial imperative of high-quality, Christian, classical education.”

Currently, the school is renting space graciously provided by Our Lady of the Valley Catholic Church in Windsor. The high school, which has had a successful first year and is nearing the end of its second, has grown in number of students and faculty. Hockel has been ecstatic about the spiritual, academic, and personal growth of the students. Even though many parents look at the curriculum and are daunted by it, Hockel assures that while it is challenging, it is accessible.

“I can say that it’s one of the strongest faculties that I have ever seen. They’re all masters in their subject matter. They are ferociously dedicated to a life of service to the Church and Christ and it’s spilling over into the students,” said Hockel. “Having added another class this year, we have had a large percentage growth in the number of students brought in. It’s nice to see that we have created a culture that is ingratiating to the new students, particularly academically.”

Hockel feels that the guiding hand of God has helped from the beginning of the founding of the school to the appointment of each and every faculty member. He feels that the Holy Spirit has not only been at work through the launch of the past capital campaign but is also the driving force of the school. Hockel wants to encourage people to donate as St. John Paul II High School aims to be another beacon of light to the world and also a point of unification for the northern Colorado community of Catholics.

“Most of the world is in a state of fear or shock and things are just very difficult and we are here to act as a light to the nations to be able to try to give guidance and hope,” expressed Hockel. “Their support does that by helping the school to thrive and shine more brightly. We know that this is something which is going to help unify Northern Colorado and lead to a really strong community of faithful Catholics. The more people are involved, the more unified we can be as the northern Colorado Catholic Church. What we want is a deeply unified community of Catholics just to help one another grow in our relationship with Christ and our own personal holiness.”