No such thing as a vacant prayer 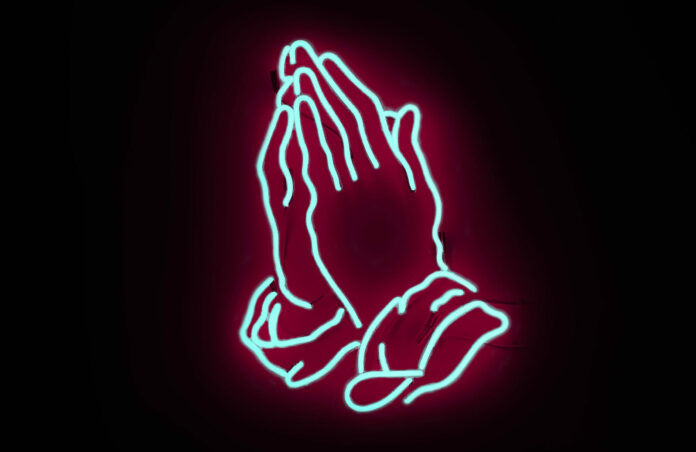 Have you ever prayed and wondered if God actually hears you? Have you ever felt like you aren’t praying “the right way” — that you are missing some “secret formula” with the right number of “Thees” and “Thous” that would make your prayers effective? Have you ever had the distinct impression that in your prayer, you’re really just talking to yourself?

Of course you have. We all have. Or at least I have — maybe I’m just projecting it onto the rest of you.

Well, at any rate, I think I received a little sign in that regard last weekend. And I think it’s meant for all of us.

Last Friday, I was driving my Dad down to his hometown, where he and I were planning to spend a weekend with our beloved relatives. It’s always a very special time for both of us — especially Dad, who at 99 and a half, doesn’t really get out all that often. And who, at 99 and a half, doesn’t have a lot of friends still living, and really treasures his time with the cousins he’s known since childhood, and loves so much.

I love them as well, and always look forward to my time with them. I have also been busy lately, and particularly tired. And taking Dad on a trip involves a lot of moving parts. I was exhausted, and really wanted to get some good rest.

Dad and I stay at the only motel in town. Always in the same suite — two rooms connected by a bathroom. It’s perfect because we each get privacy, but it’s cheaper than two adjoining rooms. It’s also cheaper because it’s in the “old” section of the motel — the part that dates back to I-don’t-know-when, and has doors that go directly outside, where cars and trucks and motorcycles park just a few feet away, which can sometimes be noisy and compromise my sleep. There is a lovely new section that was built in this century, and has nicer rooms and a central hallway. But we never stay there because there are no suites and I can’t justify the cost of two rooms.

So, as we were driving down there, and I was thinking about how I’d love to get a really great night’s sleep, I formed a half-prayer/half thought. “Lord, I’d really like to have a room in the new section.” And I immediately thought about how ridiculous it sounds for someone who has made a reservation in one place to ask God to magically move her to another place.

An hour or so later, we arrived at the hotel. And the front desk clerk said “There’s a problem with your room.”

Apparently the lock was broken. They were of course very apologetic. Offered to discount our rate for the weekend. And to move us into two separate rooms.

In the new section.

Apparently he doesn’t care. “Your Father knows your needs before you ask Him” (Mt 6:8). I know it’s important to him that we do ask. But I guess he’s not a stickler for format.

My next thought was “Why did he answer that one?” I have prayed for so many things lately — for myself, my family, my friends, my acquaintances and my nation. I’m not seeing a lot of movement in most of those. So why did he rearrange my lodgings on such short notice?

I can’t pretend to know the mind of God. But two things came to mind.

First of all, perhaps he really does care that I get a good night’s sleep. I tend to think of myself as the one who takes care of other people, and who leads other people to him. It’s easy to forget sometimes that God actually loves me for me — that I have value in his eyes apart from what I do for the other people he loves. So maybe he wanted to give me a little reminder that he really does love me, and cares about the little things like my energy level.

My second thought was this: “If he answered that prayer, is he perhaps reminding me that he hears my other prayers as well?” If he heard me half-think a prayer while driving 80 mph on the interstate, I would imagine he is also listening when I’m pouring my heart out to him in front of the Blessed Sacrament, or in my room with candles lit. If he answered that after five seconds of distracted prayer, I wouldn’t think the years and years of urgent pleading for my deeper intentions would go unnoticed.

So why doesn’t he answer those?

Well, to be fair, He has answered many, many of them over the years. Sometimes dramatically, but more often so slowly and imperceptibly that I have to really stop and think to realize it.

The others, who knows? Perhaps he is answering them in ways I can’t see or understand, that I will only fully appreciate when I am with him in eternity. Perhaps answering them in the way I want would be somehow damaging to me, and he is saving me from myself. Perhaps some trial I am suffering is somehow necessary for my good. Perhaps he has timing that doesn’t coincide with mine, and his answer in his time will be far more spectacular than anything I could ever imagine.

I honestly believe that the message wasn’t just for me. It was for all of us.

And I, his unworthy messenger, also got a nice hotel room.

Share
Facebook
Twitter
Linkedin
Pinterest
Email
Print
Previous articleMarried couples invited to be celebrated at annual Anniversary Mass
Next articleWhat is your will, O Lord?: Practical steps to listen to God and discern God’s will