NFP in real life: Hard, but worth it 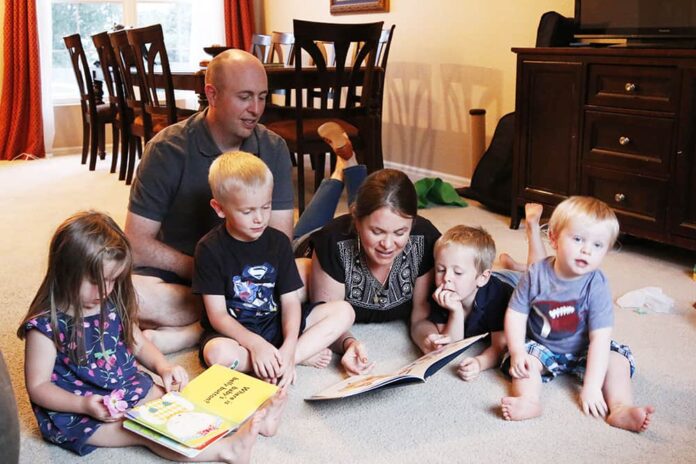 In honor of NFP Awareness Week, which begins July 23, let’s talk about sex.

Natural Family Planning (NFP) is offered as an option to help Catholic families either achieve or avoid pregnancy, including spacing children. Training in NFP is required for marriage preparation in the Archdiocese of Denver, but after that, it’s not much talked about outside of certain circles, either in everyday conversation or from the pulpit. It’s nearly foreign to mainstream healthcare, although more NFP-trained doctors are now available. But it’s a very important part of family life for many Catholics — and, like family, it is both beautiful as well as hard and messy.

And it is worth it.

Jenny Uebbing, who writes at Mama Needs Coffee, a blog connected to Catholic News Agency, recently wrote, “What do you want/need from the Church in order to live NFP?” and the resulting comments from readers were eye-opening.

Many people are seriously struggling with living it out.

The difficulties are as varied as the people themselves: Crosses in all shapes and sizes, including infertility on one end of the spectrum and super-abundant fertility on the other, making it hard to space children apart. Long periods of abstinence, medical problems, feeling isolated from instructors, finding trained doctors or other like-minded people are just some of the other common hardships.

“People are so hungry for support from the Church, who they’re trying to be faithful to,” Uebbing said. “And a lot of people are feeling that the Church doesn’t see them in this particular struggle, or have anything to offer past marriage prep short of an emergency intervention when they’re on the brink of divorce. There’s no middle ground.”

But most NFP users are walking the “middle ground” of every day family life with very little help, and many find themselves disillusioned as they encounter these difficulties.

“One big [realization from the many comments and emails] is that so much of our expectations of what marriage should look like are very rooted in a Protestant understanding of love, which is white-knuckle chastity until marriage, and then once the rings are on, all bets are off,” Uebbing said. “There wasn’t really a category mentally for chastity within marriage. There’s this disconnect that there’s an ongoing training in chastity as a couple, that you don’t actually have complete 24-7 access to each other’s bodies, unless you want to end up with 25 kids.”

That expectation only works with the assumption of using contraception, which is true for most of the world. But for couples who practice NFP, marital intimacy doesn’t work that way, said Uebbing. Even so, in her experience, it’s still easy to fall into the trap of practicing with a contraceptive mentality.

“That’s always a temptation, slipping into playing God with it, that trying to avoid should be the default setting. I don’t think that’s normal or healthy but that is the normal in our culture,” Uebbing said. “That’s such a bummer to me that that’s always our default setting, even as practicing Catholics. That it’s remarkable when a baby is conceived.”

People are so hungry for support from the Church, who they’re trying to be faithful to. And a lot of people are feeling that the Church doesn’t see them in this particular struggle, or have anything to offer past marriage prep short of an emergency intervention when they’re on the brink of divorce. There’s no middle ground.”

But trying to avoid a pregnancy or space children for “just reasons” as the Cathechism of the Catholic Church (#2368) notes shouldn’t be looked down upon, either, and is, in fact, a responsibility of the parents that’s based on their discernment of God’s plan for their family.

“I’m so grateful the Church doesn’t have a list of [what just reasons are]. And she never will, because she is our wise mother who is raising adults, not a preschool teacher with a list of classroom rules,” Uebbing said. “So it is up to them, but also depends on each couple working continuously to form their own conscience and be submitting their will for the marriage over and over again to the Lord and asking, ‘What do you want?’”

The journey to holiness in marriage is not without suffering. But it’s always an opportunity to trust God more deeply and receive his gifts in ways we could never have imagined for ourselves. Some of those crosses come as people practice NFP.

“The biggest struggle I’ve seen with people is just that we live in a contraceptive culture. So no matter how you slice it, you’re going to get pushback,” Uebbing said. “It’s not normal to have children anymore. So just that positions you in a place of complete defiance of what the world says is normal and expected and typical.”

Medical issues are a common struggle. Uebbing knows couples who have to abstain for extensive periods of time due to serious underlying medical issues.

“If they don’t want a baby, they’re looking at years of abstinence. And it’s heroic, and it’s something that God has called them to particularly in their marriage,” Uebbing said. “It’s not something that any of us would plan for in our marriage, just like we wouldn’t plan for a spouse to get cancer, or for a child to struggle with mental illness.”

Mental illness has been a struggle in Uebbing’s personal experience: After each birth, she suffers from severe post-partum depression, which is one of the reasons their family spaces their children, simply so her mind and body can heal after delivering.

“A super-abundance of fertility is it’s own kind of cross, and it’s easy to look at a family with six or seven kids and think, ‘Well, they must have been made to have a really big family,’” Uebbing said. “I do love my children, but there’s not great material support, or even psychological support for families who are in that situation.”

How the Church can help

Following conversations with readers after her NFP blog post, Uebbing spoke to friends who are priests about ways the Church can better support couples who practice NFP.

“One piece that was really clear was that we need better formation for our priests on a seminary level. I have some really interesting conversations with priest friends…who had no idea that there were different methods, that it wasn’t cut and dry and that not every couple used it the same way,” Uebbing said. “One said, ‘This would be helpful information to have in the confessional when I’m counseling people pastorally.’ If we’re asking our priests to accompany married couples, they need to know the nitty-gritty.”

“Few people take advantage of talking to their priest. There is no question that can’t be asked,” said Father Timothy Hjelstrom, pastor of St. Louis Parish in Louisville, Colo.

The biggest struggle I’ve seen with people is just that we live in a contraceptive culture. So no matter how you slice it, you’re going to get pushback. It’s not normal to have children anymore.”

“Priests should become familiar with it beyond the technical aspect of it. And couples should be willing to talk to their priest if they have questions or struggles. We’re not here to be condemning,” he added.

Uebbing said that there should be “real material support” for people who practice NFP, and one way to help could be creating a slush-fund for people who can’t afford to pay for meetings with instructors or classes and are desperately needing help.

“This is an aspect of women’s healthcare that’s a really critical piece of knowledge [for women’s overall health], and it shouldn’t be this weird add-on that you learned about during your marriage prep, but that it’s an ongoing, essential part of what it means to be human and what it means to be living out a married vocation,” Uebbing added.

Where to go for help

If you’re struggling in using NFP, first know that you’re not alone. Second, reach out.

One great help to those seeking support in NFP is other married couples, said Uebbing.

“I think every couple [should find] one other married couple, even if it’s not locally, and really come into an honest exchange [with them]. Find at least one other person or couple to talk frankly with,” Uebbing said. “I think people are afraid to be too real, but it doesn’t do anybody any favors to pretend that it’s super easy and super beautiful. They need to know people struggle with this and make huge sacrifices for it, and it’s worth it.”

If you’re struggling with the ins and outs of your fertility, Uebbing said make the investment and get an instructor or doctor you can work with regularly.

“I think because the internet exists, there’s no reason you can’t find an instructor. You don’t need someone to sit down with you in person, you can do everything over Skype or over the phone,” Uebbing said. “There are increasingly more NFP-trained physicians, so for people with harder cases, I just can’t underestimate finding a doctor who can do those blood draws. Even if it’s long distance and you go to the lab and they’re analyzing your stuff once a year — what’s more important than your health and the health of your marriage?”

For more resources on what the Church teaches about NFP, visit Jenny’s blog at catholicnewsagency.com/mamaneedscoffee. For resources on NFP in the Archdiocese of Denver, visit archden.org/eflm/nfp.

The office of Evangelization and Family Ministries is also hosting an event for NFP families on Saturday, August 5 with a vigil Mass at 4 p.m., followed by a picnic and lawn games at the John Paul II Center. Call 303-715-3252 to RSVP.