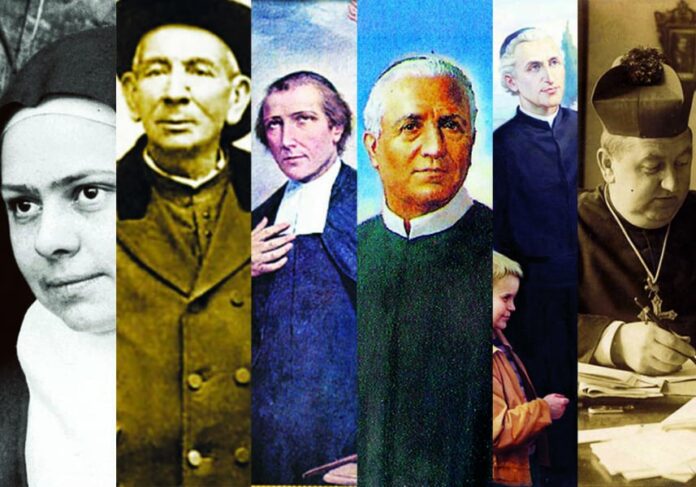 She was born Elisabeth Catez in Avord, France. Her father died when she was only 7 years old. She had a refined spiritual and artistic sensitivity and was quite a jokester as well as an accomplished pianist. She had a friendly character and had many friends.

“She loved music, walking, and enjoying nature and the mountains,” Patricia Morrison, editorial director of ICS Publications and an expert on this saint, told El Pueblo Católico.

Elisabeth discovered her vocation to the contemplative religious life at a young age and wanted to join the Carmelites. She was unable to fulfill this desire, though, until she was 21, because she had to care for her mother who not only was a widow but also had various health problems.

Elisabeth understood that her religious cell was in her heart until she was able to join the Order of Carmel in 1901. Her superiors would later say that this waiting period had given her a great maturity and made her better prepared for the religious life.

“When I recommend prayer to you, this doesn’t mean taking on a list of vocal prayers to pray every day. I speak, rather, of a raising of the soul to God through all things …” she once wrote.

In 1903, she was diagnosed with Addison’s Disease (an endocrine disorder affecting the adrenal glands) and she died at age 26.

“It seems that I have found my heaven on earth, since heaven is God and God is in my soul. The day that I understood this, everything was illumined for me,” she wrote in the midst of her agony.

Brother Leclercq served as the secretary of the General Superior of the order, Brother Agathon. He was characterized by a great love for
souls and for abnegation of himself. He was arrested Aug. 15, 1792, for refusing to take an oath to support the civil constitution of the clergy, which required them to separate themselves from the Church. Two weeks later, nearly all the prisoners were killed for their refusal to take the oath.

“Let us suffer with joy and gratitude for the crosses and affliction sent to us,” he wrote to his sister before dying.

El Pueblo Católico spoke with Brother Leonardo Rafael López, coordinator of the La Salle brothers in Venezuela, who described Brother Salomón as “a man of service, attentive to the needs of those around him, with a developed capacity to respond [to situations] opportunely and correctly.”

López also noted that the holiness of this martyr teaches us today that the economic, social or political problems of a country “are passing,” and that we “should prepare ourselves to know how to face them with clarity, firmness, and, above all, invoking each day the lights of the Holy Spirit so as to make the best decisions.”

Better known as “el cura Brochero” (el cura translates to “the priest”), Father Brochero was a diocesan priest of Argentina with tremendous missionary zeal. He tried to bring many people to an encounter with God through spiritual exercises. In this effort, he traveled long miles, riding a mule, sometimes despite intense cold or raging snowstorms. On certain occasions, as many as 500 people joined in these pilgrimages so as to have nine days of retreat according to the method of the spiritual exercises.

Father Brochero founded a retreat house for spiritual exercises that today is named after him. He also built a home for religious, a girls’ school, a residence for priests, and various churches. He also participated in the construction of a railroad line to help many people escape poverty and isolation, from where, he said, they were “abandoned by everyone, but not by God.”

He eventually was left blind and died of leprosy, caught from the faithful he went to visit and to spiritually assist.

“Father Brochero has left us as a priest the testimony of a fully human and deeply religious and missionary path, in the context of his own history, style and culture,” according to Archbishop José María Arancedo of Santa Fe de la Vera Cruz, the president of Argentina’s bishops’ conference, in an article published at the web site of the Archdiocese of Cordoba, Argentina.

He was a priest of the Diocese of Salerno, in the south of Italy, and the founder of the Congregation of the Sisters of Saint John the Baptist – also known as the Baptistine Sisters of Nazareth.

He was characterized by his zeal, his dedication to liturgy and for his diligence in administering the sacraments, especially confession, where he expressed his paternal love and understanding for the penitents.

He dedicated himself to evangelize with preaching that, while profound, was both simple and incisive. He also endured certain difficult tests: For example, he was falsely accused, which led his bishop to remove him from leadership of his institute. And some of the sisters of the community caused division with their defiance. He accepted these situations with sorrow, but also with a spirit of submission and obedience.

“Let’s become saints following Jesus closely … Daughters, if you live in poverty, in chastity and in obedience, you will shine as stars in the sky above,” he said to his religious daughters.

The congregation he founded is present in 17 nations on four continents, including Mexico. The nuns seek to live a spousal relationship with Jesus of Nazareth at the service of the most small and poor, and, like John the Baptist, to prepare the way of the Lord.

He was born in Brescia, in the north of Italy, to a family of the noble class. As a child he had “a pious spirt, concern for the needy, attention for poor children, a quick and sharp intelligence that brought him to face problems concretely and with common sense,” the current superior of the Pavoniani order he founded, Father Ricardo Pinilla, told El Pueblo Católico.

Ludovico was ordained a priest in 1807 and sought above all to serve needy children and youth. In 1812, he opened an oratory for them, where he gave them instruction in catechesis, morals and citizenship. Later he founded the Institute of St. Barnabas, known as a “college of arts and trades.”

In 1847, he founded the Congregation of the Sons of Mary Immaculate, which came to be known as the “Pavoniani,” made up of religious priests who gave spiritual direction and sacraments, and religious brothers who coordinated the workshops and education of the children.

Father Pavoni died of bronchial pneumonia in 1849, after walking 7.5 miles in a torrential rain with a group of youth from Brescia to Saiano, fleeing the “10-Days” conflict between Austria and Brescia.

“We’ve always called that road the calvary of Saiano, where Ludovico Pavoni, who had lived for his youth, gave his life for them,” Father Pinilla said.

Father Pavoni was beatified in 2002 by Pope John Paul II, who called him “another Philip Neri … a precursor of St. John Bosco … a perfect imitator of St. Joseph Cottolengo.”

He was the bishop of the Spanish Dioceses of Malaga and later of Palencia. He was characterized by his great devotion to the Eucharist, and wrote several books on this topic.

“The gaze of Jesus Christ in the tabernacle is a gaze that fixes itself in the soul and which you never forget,” he wrote in 1902, after leaving for a mission in Palomares del Rio. “It came to be for me like the starting point to see, understand and feel the whole of my priestly ministry.”

In 1905 he was named the pastor of the church of St. Peter in the Huelva region, where he noted a great religious indifference. He thus began in 1910 the “Work for the Tabernacles-Calvaries,” to respond to the love of Christ in the Eucharist with a love of reparation.

He was named auxiliary bishop of Malaga in 1916, and four years later, titular bishop. He developed schools and catechesis and was often found preaching on the streets.

The religious persecution in Spain of the 1930s immediately brought problems and in 1931 his episcopal palace was burned down. From 1932 he began to direct his diocese from Madrid and in 1935 was named bishop of Palencia.

His health began to deteriorate but he offered his mortifications with docility. He died in 1940 and his epitaph has the following phrase:

“I wish to be buried beside a tabernacle, so that my bones in death, as my tongue and my pen in life, can always be saying to those who pass by, ‘There is Jesus. There he is. Do not leave him abandoned.’”