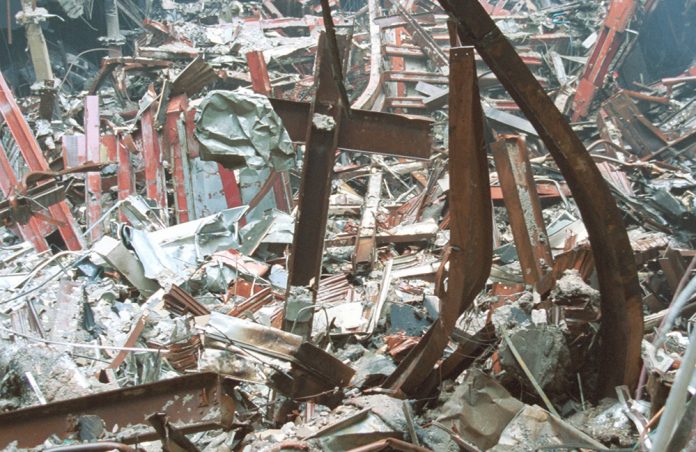 After I moved to New York City in early 2015 to serve the Church at the Permanent Observer Mission of the Holy See to the United Nations, one of my first excursions was to go to Ground Zero to visit the 9/11 Museum that had opened about 10 months before.

Every time I had visited New York over the previous 14 years, I had made a pilgrimage to the site to pray. Coming to live in New York City for an indefinite period, I experienced an inner urgency to go to where the Twin Towers once stood, since it was there, as a result of the events of 9/11, that I became in spirit a New Yorker.

Growing up as a Red Sox fan in Lowell, Massachusetts, New York was deemed the “evil empire.” We were nursed on envy and haunted by the Curse of the Bambino, Bucky Dent’s 1978 homer, Mookie Wilson’s 1986 grounder, Aaron Boone’s 2003 homer, and every Yankees or Mets championship. Part of all young Bostonians’ self-identities was that we were, proudly, not New Yorkers.

That all changed for me on 9/11 in a way that is hard not to describe as a “conversion.” A conversion is not just a minor change of behavior, but a death and resurrection: Part of us dies, and a new person is born. That day, as I ministered to shocked Catholic high schoolers and faculty, parishioners, friends, family members and strangers, and alternated Holy Hours before the Blessed Sacrament and my television screen, puerile sports grudges evaporated and the deepest sense of solidarity I had ever experienced emerged. We were all united in suffering because of the attacks, in mourning for those who had their earthly lives robbed, in the call to respond heroically.

Not only was New York changed that day — and, as many New Yorkers will say, became like a small town, where people were no longer strangers but cared for each other — but New York became an even greater symbol of our country and of American resilience.

So upon moving to Manhattan, I went as quickly as I could to pray at the site of my sacred rebirth as a New Yorker.

To visit the 9/11 Memorial and Museum is a somber experience. It slows my breathing. It upsets my stomach. It renders me speechless. It brings to the surface many of the emotions I endured 20 years ago.

I’ve always been disappointed in the memorial, entitled “Reflecting Absence.” It features, where the Twin Towers once stood, two reflecting pools with waterfalls falling 30 feet from ground level — where the 2,983 names of those who lost their lives on 9/11 (as well as the Feb. 26, 1993, bombing of the World Trade Center) are poignantly inscribed — toward a central hole where the water drops anew, seemingly into oblivion.

Architect Michael Arad won a competition that involved 5,201 submissions from 63 countries. He wanted to have the pools represent “absence made visible,” with water flowing into voids that can never be filled. He succeeded in his artistic aims. But the monuments are devoid of hope. The falling water brings to mind the collapsing towers, and the second waterfall evokes a drain, sucking the names of the deceased and all of us continuously downward, until seemingly the “absence” of all good we call hell.

The 9/11 Museum is different, and amid the journey through destruction, sadness and grief on which we are led, it always intersperses signs of inspiration, love and courage: phone calls from those on hijacked planes to family members, stories of how certain lives were saved, and the sacrifices heroically given.

What stopped me in my tracks during my first visit, and somehow still does each time I take friends and visitors there, comes toward the end, where I see a colorful handmade sign:

The sign is right to the side of the “Cross at Ground Zero,” discovered in the ruins of 6 World Trade Center on Sept. 13, 2011, rescued, moved three weeks later and blessed by Franciscan Father Brian Jordan.

Over the next 10 months, until the recovery phase ceased, Father Jordan celebrated Mass under its arms for first responders, construction workers, family members of the victims, troops heading to Afghanistan and others. The sign advertising the “Mass and the Cross” is, to me, the most fitting and ultimately effective way to respond to events of 9/11.

It’s the only way I knew how to respond on the morning of 9/11, when Anthony Nunes, the principal of Bishop Connolly High School in Fall River, Massachusetts, asked me what we should do after we, together with several faculty, saw the second tower collapse on television. A prayer service to God wouldn’t be enough. We needed God Incarnate to come to us.

I preached that day, with a raw heart, about two things: evil and how God brings good out of evil.

We were three days before the feast of the Exaltation of the Cross, and I mentioned how on Calvary God brought the greatest good out of the greatest evil of all time and that God would not abandon us now. I urged the students, who had never been so attentive at a school-wide Mass before — as everyone seemed to recognize that God wasn’t a theological object but Someone we now knew we really needed — to huddle with Mary at the foot of the cross and learn from her not just how to receive the fruits of Christ’s victory but to cooperate in his mission of saving the world from evil, destruction and death.

Father Jordan’s 2017 book, The Ground Zero Cross, tells the story of the discovery of the cross by Frank Silecchia, how the two of them worked with Mayor Rudy Giuliani’s office to excavate and move this 17-foot-high T-beam to a place where it could inspire, inform and influence people’s reactions and prayer, and how Father Jordan perseveringly fought against lawsuits from the American Atheists Association to make sure it was enshrined as part of the 9/11 Museum.

The most moving part of the book for me was how Father Jordan preached about God, death, life, love and the message of the cross each Sunday, as well as for a frigid Christmas midnight Mass, the feast of the Holy Family, on Epiphany, Valentine’s Day, Ash Wednesday, St. Patrick’s Day, Palm Sunday, Holy Thursday, Easter Sunday, Mother’s Day and Father’s Day.

He was representing the whole Church and every priest in the world. More than anything, he was acting in the Person of Christ, who had given his life on the cross to take the venomous stinger out of sin and death, the Font of Living Water not flowing down into the depths of the netherworld but springing up inside us to eternal life (1 Corinthians 15:55; John 4:10).

On Good Friday the following year, Father Jordan led an ecumenical Stations of the Cross with the Ground Zero Cross prominent in the background.

When it came time to meditate on the death of Christ in the 12th Station, he asked everyone to kneel. There was complete silence except for the heavy machinery “doing its own version of a Gregorian chant.” He encouraged everyone to pray aloud the name of those they knew who died at the site, and they were shouted out one by one. “To this very day,” he wrote, “it was the most powerful rendition of the Stations of the Cross I have ever experienced in all my years of ministerial priesthood.”

Ground Zero puts the meaning of the cross into greater relief. As Pope Francis declared from within the 9/11 Museum on Sept. 25, 2015:

“This place of death became a place of life, too, a place of saved lives, a hymn to the triumph of life over the prophets of destruction and death, to goodness over evil, to reconciliation and unity over hatred and division.”

Since the first millennium, Christians have sung and inscribed prominently on their church façades the words, O crux ave, spes unica!,” which mean, “Hail, O cross, our only hope!” The cross is our only hope for two reasons:

Without Christ’s death on the cross, we would have no hope of eternity; and unless we, as Jesus said, pick up our cross every day and follow him, unless we glory in the cross of Jesus and are crucified to the world, his victory would for us be ultimately unavailing (Matthew 16:24; Galatians 6:14).

The Ground Zero Cross reminds us of that “only hope” and, as we mark the 20th anniversary of 9/11, continues to frame our response.