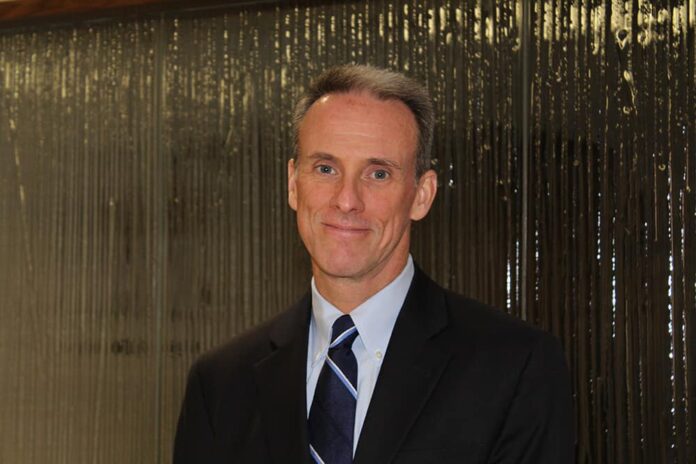 The newly-elected president of Arrupe Jesuit High School, Michael J. O’Hagan, will seek to serve students and families in the Jesuit tradition of providing a well-rounded, Catholic formation.

“My vision remains rooted in the original vision of the school, which is to serve families and students who, for many reasons beyond their own control, have been traditionally underserved,” O’Hagan said. “I want to make sure that Arrupe is always connected to its mission of serving young people and families in this Jesuit Catholic tradition.”

O’Hagan was the founding principal of Arrupe Jesuit High School when it opened in 2003 after a lay initiative to bring Catholic education back to the center city of Denver.

The founders took on the work-study model of Chicago’s Cristo Rey Jesuit High School, which allowed students to implement work into their education with a two-fold purpose: Gaining real-life formation while paying for their college prep education.

“It’s a dynamic relationship with the metro area and business community,” O’Hagan said. “Our young people have an experience of the real world that they can connect to their classroom lessons and affords them an opportunity to see a future they didn’t always know existed.”

Arrupe JHS students work 5 days a month and earn a total of around $2.5 million for the school.

My vision remains rooted in the original vision of the school, which is to serve families and students who, for many reasons beyond their own control, have been traditionally underserved.”

The new president’s role will have a greater focus on strengthening the existing relationships with entities that help the advancement of the school through this work-study program. As principal, his responsibility was more internally-focused on faculty, staff and students.

Over 130 organizations now contribute to the mission of the school, allowing all 420 students to share full-time, entry-level positions in a wide variety of fields including education, health and engineering.

Other than making sure bills get paid, O’Hagan assured that his responsibility extends to keeping and advancing the Jesuit Catholic identity of the school. This reality calls for a clear understanding of the needs of the students and an integration of families, he said.

Ninety-three percent of students at Arrupe are Hispanic and the other seven percent include African Americans and African refugees.

Some of the challenges that students face on a personal level include being separated from loved ones due to deportation and experiencing trauma and violence due to the realities of the neighborhoods they live in. Nonetheless, O’Hagan assures that the faculty and staff go beyond these facts when defining the kids.

“We’re very aware of the challenges they face, but we’ve made an intentional decision – one that is firmly rooted in the Gospel – to define our kids by their talents and their gifts,” he said. “We often describe ourselves as a school of dreams, the dreams of our kids and the dreams of their moms and grandparents.”

Arrupe JHS takes families seriously. It knows that if the richness given to the students is not shared by the family, it has failed.

For this reason, the school provides many resources for them and also lets them know that they are welcome, highlighting the key role they play in their children’s education.

We’re very aware of the challenges they face, but we’ve made an intentional decision – one that is firmly rooted in the Gospel – to define our kids by their talents and their gifts.”

Families are considered and helped from the application process itself throughout the four years of education by way of workshops and gatherings that help them understand their children’s progress and education.

“We don’t want families to feel like their kids are having an experience of high school that is separate from their families. We want them to have a shared experience,” O’Hagan stated.

After so many years of work in the mission of making the school facilities, staff and mission reflect the dignity and potential of every student, the new president is mostly grateful for the support received.