When the first parishioners of Our Lady of Lourdes began their community in 1947, they never imagined the growth that the parish was going to have decades later.

Today, more than 70 years later, the parish, which began as folding chairs and the hardwood floors of the first Masses celebrated in the gymnasium of a children’s shelter, has become not only one of the fastest growing parishes in Denver, but also one of the most recognized Catholic schools nationwide.

Father Brian Larkin, pastor of the parish for the last 5 years, has witnessed huge growth in the last few years.

“I believe Lourdes has flourished in so many ways simply because the glory of God’s redemption has been allowed its proper place,” Father Larkin told the Denver Catholic. “Once the love of Christ is given its primacy, allowed to radiate in all its splendor, then our faith moves from simply being an obligation and becomes what it really is: the good news of our redemption.” 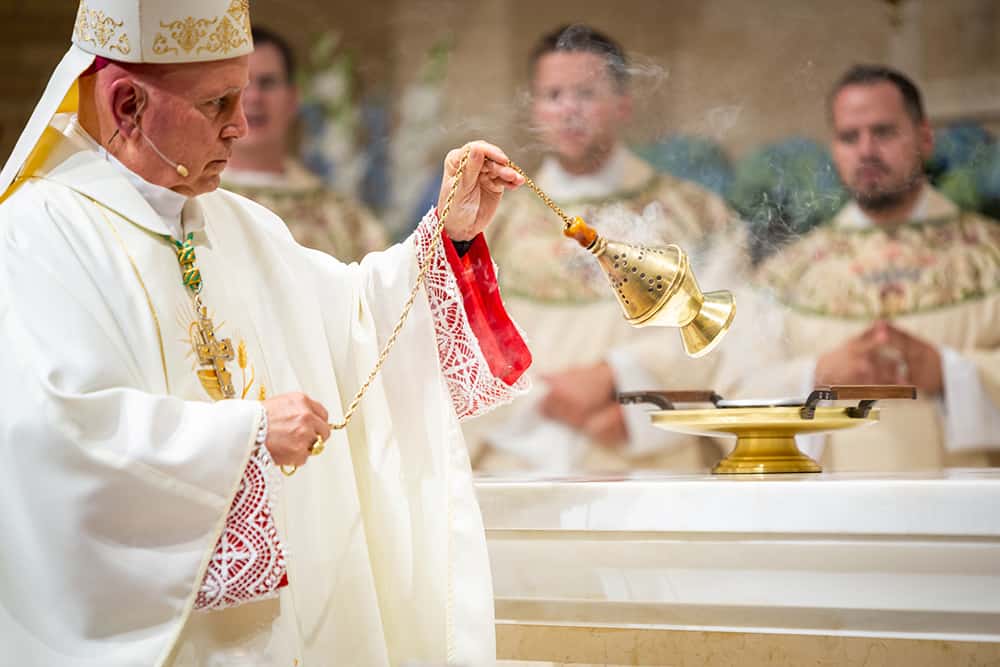 Archbishop Samuel J. Aquila dedicated the altar in the newly renovated Our Lady of Lourdes Parish in Denver Sept. 10. (Photo by Brandon Young)

Lourdes is a very vibrant and young parish. They have large RCIA (Rite of Christian Initiation of Adults) and marriage preparation programs to support and teach parishioners the “why” of the Catholic Church and its faith.

“The Catholic intellectual tradition is greater than any that exists, but most people aren’t aware of it,” Father Larkin explained. “I teach our RCIA class every year and I invite anyone and everyone to come regardless of whether they are already Catholic or not even interested in becoming Catholic.  Our program had about eight people in it my first year, this year we’re averaging around 90 people each week.”

In 2016, Father Brian announced the beginning of the “Capital Campaign” which intended to repair, restore and embellish the church, as well as to add a narthex gathering space for the growing community. Although at times it seemed impossible, with the contributions of parishioners and the hard work of their general contractor, Fransen Pittman, the project was successfully completed this past summer.

The current church at Lourdes was built in 1966 and had remained unchanged since then. The renovation updated and fixed major issues with mechanical and electric systems, but the main objective of the project was to improve the aesthetics of the church.

For the last couple of years during construction, half of the school gym turned into the church, but in September, Archbishop Samuel J. Aquila finally consecrated the altar and re-dedicated the church. 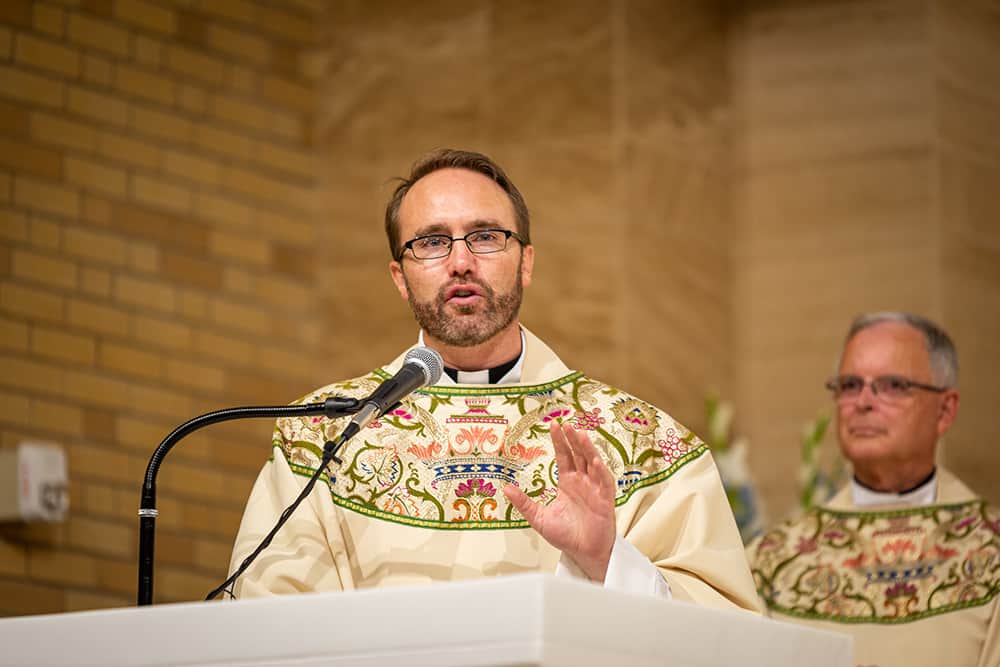 Lourdes pastor Father Brian Larkin said he hopes the parish can be a refuge from the world. (Photo by Brandon Young)

“A friend of mine used to say that his church ‘lied to his congregation,’ meaning that churches are meant to teach us the faith by the way they are built, and that his didn’t measure up to that standard,” Father Larkin said. “Prior to the renovation, our church wasn’t one which lied, but it didn’t inspire a deeper faith. The new church, in my opinion, is in harmony with the beauty of the liturgy — the music and the gospel resonate with the beauty of the church itself.

“Our numbers have grown, but more importantly, people are drawn into prayer with the aesthetics of the church.”

With a new and renovated parish, Our Lady of Lourdes is now serving the growing community of the south side of Denver. The parish also has one of the most recognized Catholic schools for its unique classical model of education that has been expanding over the last couple of years. In addition to the classical method of education, the school is firmly Catholic, offering daily Mass and monthly confessions, and making devotion to the Blessed Mother one of its pillars.

“Our Catholic faith is the most important part of our mission here at Lourdes Classical and everything we do begins and ends in prayer. We participate in the sacraments frequently and help our students fall in love with Jesus in the Eucharist every day,” said school principal Rosemary Vander Weele.

Evangelization means that what is eternal enters into time, so the timelessness of God breaks into 2019 America. We try to embody that paradigm in our events, in our liturgy, in our community.”

Father Larkin said he is afraid of the future of our culture and the anti-Christian feeling that seems expand daily in our country and our society. Therefore, one of his main goals at Lourdes is to deepen the faith of his parishioners.

“Christians of the coming century in the United States need to know their faith and be on fire for it, or they will likely leave as the culture battles against the Church,” he said. “My hope for Lourdes is not that we do everything, but that we go deep, that people have strong relationships with God, with each other and that the parish can be a refuge from the world.”

Furthermore, one of the greatest challenges for the pastor is to reflect the incarnation of Jesus in our society and remind us that God sent his only begotten Son into the world to provide us salvation. At Lourdes, Father Larkin said this is at the core of the parish’s ministry.

“Christ is fully God and fully man, but it has always been easier to strip him of his divinity or of his humanity.  I see evangelization that way: it’s easier to either remove Jesus from humanity and make him someone wholly alien to the 21st century, or conversely to make him just another human who looks like us, but not like God,” Father Larkin said. “Evangelization means that what is eternal enters into time, so the timelessness of God breaks into 2019 America. We try to embody that paradigm in our events, in our liturgy, in our community.”

When Rosemary Anderson arrived to Our Lady of Lourdes School in 2011, it had just 90 students and was on the brink of closing. Now at near capacity with 231 students and a long wait list, the K-8 school in Denver just announced it is opening a second location this fall.

What caused the shift? A switch to classical education and strong leadership.

“I was hired to bring in a change to revitalize the school,” the 33-year-old principal said, who since her December marriage now goes by Vander Weele. “The following year we began the three-year implementation process. The results of this project have been incredibly humbling.”

Lourdes’ south campus will open in the old St. Louis School in Englewood. St. Louis, which was in operation 87 years, closed in May 2016.

“It will be good to hear the voices of students echoing in the halls again,” said Father Bill Jungmann, St. Louis Church pastor. “On the Sunday it was announced, people were so excited they applauded.” 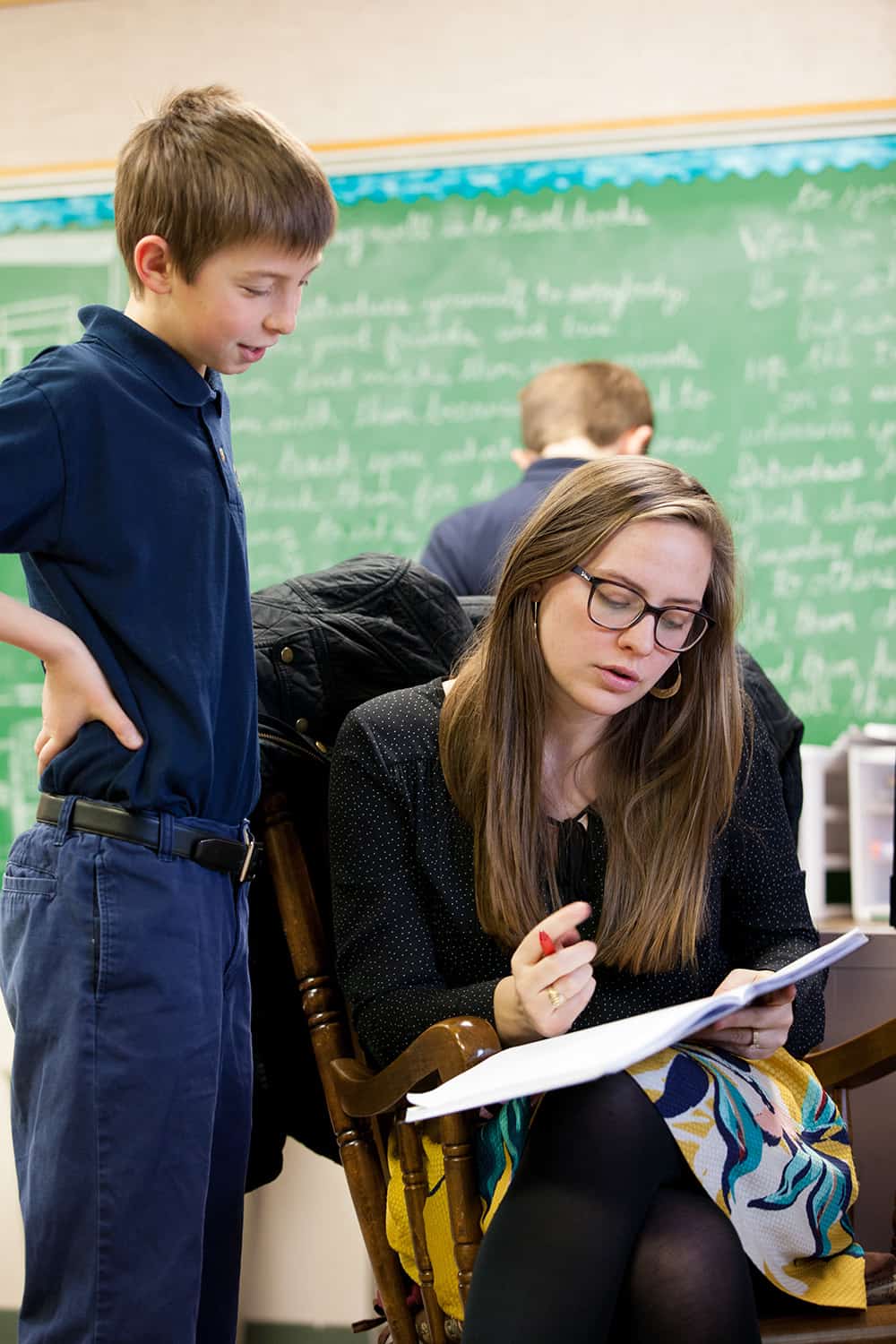 Mrs. Bigelow, an aide for 2nd – 5th grade at Our Lady of Lourdes, helps a student with a problem. The staff at Lourdes, under the leadership of Rosemary Vander Weele and Father Brian Larkin, is largely credited with having helped turn the school around over the past seven years. (Photos by Andrew Wright)

Those familiar with Lourdes, credit Vander Weele’s leadership with the school’s dramatic success.

“She’s cast a vision and has formed a team that also shares that vision and passion that is able then to see it happen, to realize it,” said former homeschooling mother Karin Middleton, who with her husband Tom has a 12-year-old at the school. Their 15-year-old highschooler graduated from Lourdes. “[Rosemary] would be very quick to say that she wouldn’t be able to do this without [pastor] Father Brian Larkin, [vice principal] Ryan O’Connor and the rest of the Lourdes team.”

Ben Akers, a dean and theology professor at the Augustine Institute who with his wife Heather have a first-grader at Lourdes—the eldest of their four children—agreed.

“Rosemary’s influence on the school is tremendous,” he said. “She turned around a school that was looking to close its doors and now they have to open their doors at another location. That’s a testament to her vision and bringing that vision into practice and communicating it to the teachers and parents and, really, just being a great leader.”

A belief in Vander Weele’s passion and ability to lead spurred former Denver auxiliary Bishop James Conley to broach hiring her in a last ditch effort to keep Lourdes from closing. The bishop, who now heads the Lincoln Diocese, shared the story at an educators conference last year.

“I know a teacher, she’s never had any experience as a principal, but she has a great heart and lots of energy and she has a great understanding of Catholic education,” he recalled telling those set to shutter Lourdes. “Why don’t you appoint her principal of the school? If she crashes, in a year it’s closed.”

…Parents are realizing more and more that our culture is moving against Christianity and it’s become of the utmost importance to provide our children with the best education they can have—one that understands reality with a Catholic Christian mind.” – Father Brian Larkin

Archbishop Charles Chaput, then prelate of Denver, agreed to take on the risk of a rookie principal being the first to implement the classical model—which uses a three-part process of grammar, logic and rhetoric to teach students how to learn and how to think—in a school of the archdiocese.

“The first year was up and down a little bit, then slowly things started to take off,” Bishop Conley said. “[Rosemary] did a lot of PR work herself, and word got around. Understanding of classical-style education gained interest … and here we are today.”

When Vander Weele took the reins at Lourdes, she was just 27, and was the youngest principal in the archdiocese.

A Denver native with several degrees and 14 years experience in local Catholic schools, Vander Weele asserts that Lourdes’ resurrection from near death is due to her team’s fidelity to the Lord and staying true to their mission at the school.

“It hasn’t been easy,” she said about switching to the new curriculum. “As a community, we’ve grown and learned about the richness of classical education.

“Father Brian is extremely supportive, as was Msgr. [Peter] Quang, who hired me. To walk arm and arm with them and lead together has been a tremendous blessing. Ryan O’Connor, the teachers and staff are just incredible. The success of this mission is due to them.” 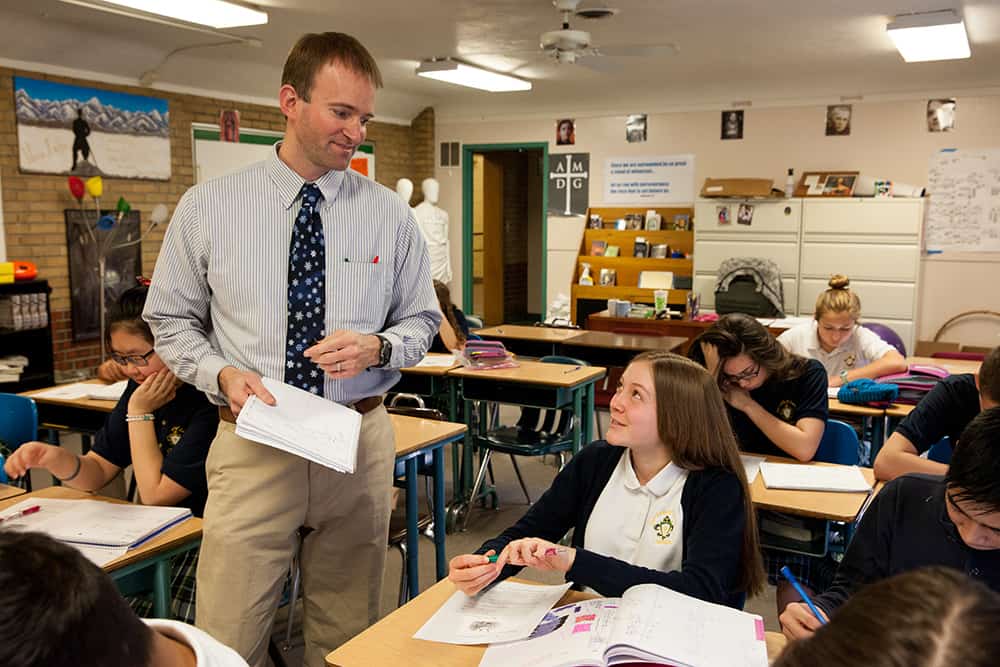 The culture of Lourdes is one that embraces the Catholic faith and combines with a classical curriculum of education. (Photos by Andrew Wright)

Lourdes’ south campus will start by offering kindergarten through second grade for the 2018-2019 school year, with plans to add additional grades as need demands.

“It’s a continuation of the mission and brand here,” Vander Weele emphasized, explaining that administrators realized they needed to expand as current families alone filled grades K-2 at the Denver site for this fall, leaving no room for the 40 families on a waiting list.

“The demand,” she happily noted, “has been overwhelming.”

“We’re super excited to be able to serve more families,” said Father Larkin. “I think parents are realizing more and more that our culture is moving against Christianity and it’s become of the utmost importance to provide our children with the best education they can have—one that understands reality with a Catholic Christian mind.”

To learn more about Our Lady of Lourdes, visit lourdesclassical.org.