New fronts in the fight for life 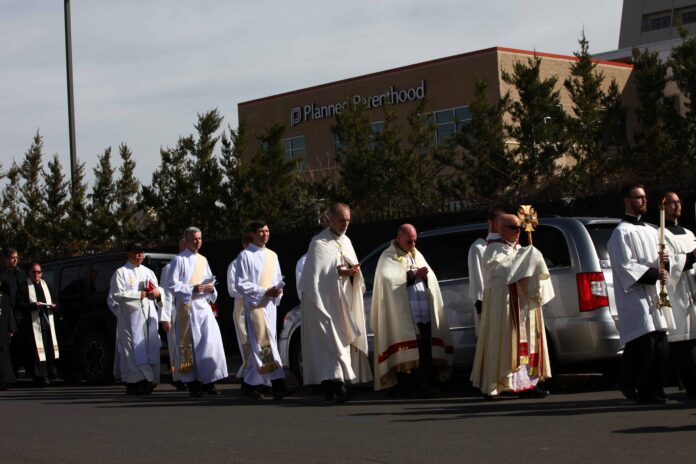 In the coming weeks, I will be joining Catholics and other pro-lifers in the 40 Days for Life campaign of prayer, fasting and witness. This effort to protect life is gradually succeeding, but the culture of death is launching new attacks to which we must respond.

This past year, Pope Francis marked Italy’s “Day for Life” celebration by invoking the words of St. Mother Teresa. “Life is beauty, admire it,” she said, adding, “Life is life, fight for it.” This is true, the Holy Father noted, for the child about to be born and for the person who is about to die: “Every life is sacred!”

The great men, women and children who courageously participate in 40 Days for Life are doing just that through prayer, fasting, community outreach and holding peaceful vigil at abortion facilities. It is amazing to see the fruit of their prayer. Shawn Carney, president of 40 Days for Life, recently noted, “All [told], we are now aware of 90 abortion centers that have gone out of business permanently following 40 Days for Life vigils since our coordinated campaigns began in 2007.

“We don’t take credit. We just note that people prayed for an end to abortion in their communities, and the places that offered abortions then closed.”

At the same time 40 Days for Life is occurring, the Church observes Respect Life Month, which this year has the theme: “Be not afraid.” How fitting it is to hear these words at a time of political and global instability. How fitting it is that the Archangel Gabriel reassured Mary with these same words after his announcement that she would bear and give birth to the Son of God.

According to 40 Days for Life, former Planned Parenthood employees have reported that pro-lifers pray outside of their facilities that “the ‘no show’ rate for an abortion appointment goes as high as 75 percent.” Do not be afraid of being ridiculed or demeaned. Your witness has an impact.

A new front for the pro-life movement in Colorado and other states has opened at the end of life. With the legalization of assisted-suicide, those who are vulnerable at the end of their life are threatened. Supporters of the new law argue that only those who want to die are utilizing it, but opportunities for coercion are built into it, starting with the fact that one of the witnesses to the request for the lethal overdose can be an heir.

Pro-lifers must not be afraid to accompany the sick and the elderly. The 2016 Oregon report on its 20-year-old Death with Dignity Act provides an important insight into how those considering assisted suicide are not as worried about pain as they are about losing their independence and dignity. The report says, “Like previous years, the three most frequently mentioned end-of-life concerns were loss of autonomy (89.5%), decreasing ability to participate in activities that made life enjoyable (89.5%), and loss of dignity (65.4%).”

Pro-lifers must step into this void, to bring the love of Christ to those who are despairing and who likely feel abandoned. We must share the truth that in Christ suffering is not meaningless; it can be transformed by uniting it to his sacrifice on the cross. We must bring the same perseverance that we show in the fight for the lives of the unborn to the plight of the sick and the elderly, whom society has now deemed discardable .

When I think of the suffering of those considering assisted suicide, Sts. Maximilian Kolbe and John Paul II come to mind. As he sat in Auschwitz’s starvation bunker, St. Maximilian led his fellow prisoners in prayers and songs and offered meditations on the Passion of Jesus. Despite his own suffering, he comforted and accompanied those in need, relying on God’s grace for strength.

St. John Paul II, as many of us recall, suffered from Parkinson’s disease and experienced much physical hardship in life, including an assassination attempt in 1981. But because of his faith, St. John Paul responded with forgiveness to his would-be killer and remained rooted in his identity as a son of the Father. “We are not the sum of our weaknesses and failures,” he said at World Youth Day in Toronto, “we are the sum of the Father’s love for us and our real capacity to become the image of his Son.”

St. John Paul II’s final words, “Let me go to the house of the Father,” reflect the heavenly orientation that all of us should seek to live with and bring to those who are facing the end of their life on earth. As Christians, we are called in our encounter with Jesus to keep our eyes fixed on him and not the ways of the world. With God’s grace, each of us can be a light in the darkness for those who are despairing, whether they are expectant mothers and fathers or those who are dying. Be not afraid!