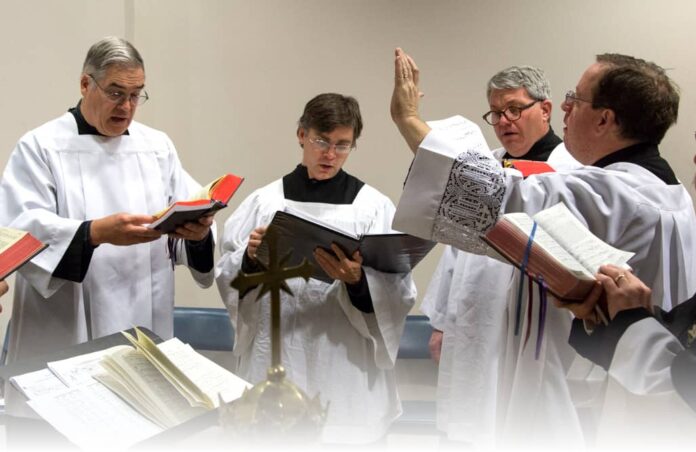 There’s a new sacred choir in the Archdiocese of Denver and its name conveys its mission: Gaudium Verum, which is Latin for “True Joy.”

“We want to offer a glimpse of heaven,” founder and director Rick Wheeler told the Denver Catholic about the 25-member choir, which specializes in sacred Renaissance music, primarily polyphony and Gregorian chant.

Wheeler, 10-year music director at Our Lady of Mount Carmel Latin Mass Parish in Littleton and member of a professional choir, said the new choir is not a ministry of the parish he serves. Rather, Gaudium Verum is an independent choir that can be hired to sing a Mass for special occasions. For it’s inaugural Mass, the choir sang Giovanni Pierluigi da Palestrina’s Missa Papae Marcelli for the Jan. 25 feast of the Conversion of St. Paul at Holy Name Church in Denver.

The 16th century Palestrina is called “the prince of music” for his technical perfection. Missa Papae Marcelli (Pope Marcellus Mass) is among his most famous works.
“Every single person loved it. They thought it was beautiful,” Holy Name pastor, Father Daniel Cardo, S.V.C., told the Denver Catholic. “Many asked, ‘When can we do this again!’”

“For me personally, it was a beautiful, prayerful experience — in many ways a dream come true,” added the Sodalitium Christianae Vitae priest, who holds the Benedict XVI Chair for Liturgical Studies at St. John Vianney Theological Seminary, is a visiting professor at the Augustine Institute and author of the 2019 book The Cross and the Eucharist in Early Christianity: A Theological and Liturgical Investigation.

Both Wheeler, who directs the main mixed voice and the schola cantorum (chant) choirs at his parish, and Father Cardo, who incorporates chant and polyphonic music into his parish’s 10:30 a.m. Sunday Mass, are advocates of making sacred polyphonic music more readily available to Catholics who miss it or have never encountered it.

“This music is sublime,” Father Cardo said. “The Church teaches that the liturgy is the source and summit of our faith. Palestrina is about the voice, the purity of the word. This is truly liturgical because the word has priority over the music — the music comes from the words.”

“The whole idea of polyphony is it can raise the soul and mind to God without being artistically distracting,” said Wheeler. “That’s an aspect of polyphony I’ve always respected.”

Wheeler said he is still auditioning talented chamber-music vocalists for the choir. He also welcomes invitations from pastors who would like to hire the choir for special Masses, or from laypeople for weddings, or from the archdiocese for special liturgies.

“This is about prayerful representation of the most beautiful music written for the Church,” Wheeler said, noting that the Second Vatican Council said Gregorian chant should have first place in the Mass, which remains the directive in the 2011 General Instruction for the Roman Missal.

“Pope Francis just said all churches should have some rooting in Gregorian chant,” Wheeler said referring to the pontiff’s Sept. 28 address to the Italian St. Cecelia Association. “It’s the music of the Mass.”

Father Cardo reflected on the same in the Jan. 16 Adoremus.org article “’The Church Stands or Falls with the Liturgy’: Benedict XVI’s vision for Church Renewal.”
“Liturgical music, as explained by the Council of Trent, and later by St. Pius X, the Second Vatican Council, and St. John Paul II, finds its standard in Gregorian chant and classical polyphony,” writes Father Cardo. “We should not be afraid to promote beauty, according to the musical tradition of the Church, which the Council describes as ‘a treasure of inestimable value, greater even than that of any other art’” (Sacrosanctum Concilium 112).

Wheeler emphasized that Gaudium Verum is not just for Latin Mass devotees.

“One of the big goals of Gaudium Verum is to show how this music fits the Novus Ordo Missae,” Wheeler said, referring to the new order of the Mass promulgated by St. Paul VI in 1969. “If you’ve never heard polyphony, it’s an experience and a half to be surrounded by this sound that feels like it’s there, but not there. It has this ethereal character.

“There are professional groups across the world who are doing polyphonic Masses. They are showing how it’s an integral part of the liturgical service. It’s not new, but it’s new to Denver.”